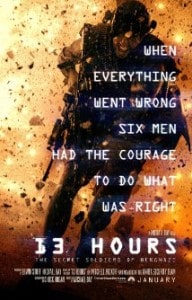 Bayghazi…okay, that reference is out of the way. Truth is that popular, slightly insulting moniker/hashtag isn’t a wholly proper summation of Michael Bay’s take on the 2012 attack of an American diplomatic compound in Benghazi. Based on the book by Mitchell Zuckoff, 13 Hours: The Secret Soldiers of Benghazi no doubt contains several Bayisms, but the film is certainly more authentic (and entertaining) than the director’s last stab at historical dramatization (Pearl Harbor).

The opening act establishes the characters and the confusion in the tension-filled region well. It’s only after the slow motion shirtless workout sequence – complete with skin-rip American flag tattoo on one of the shredded ribcages – when the film loses some legitimacy and becomes a carnival of generic, chest-pounding jingoism and stuff getting blown up real good. The explosions and blood-spurting head shots sure do look pretty cool, though.

With various militia forces in Libya raiding the weapons caches of deposed and executed dictator Muammar Gaddafi, the country descends in chaos. As foreigners exit en masse, American Ambassador Chris Stevens (Matt Letscher) arrives in Benghazi to promote diplomacy, staying in a residential outpost – of which we get a stilted lecture on how this is much different than a fortified embassy. Another U.S. compound close by is headed by soon-to-be-retiring C.I.A. higher-up Bob (David Costabile) and also houses a collection of bearded, muscular GRS operators – contracted military men who provide security and conduct necessary maneuvers. When Ambassador Stevens’ residence is besieged by an armed Libyan force, the operators spring into action against the orders of Chief Bob.

As the battle rages from the ambassador’s not-so-stronghold to the C.I.A base, brave soldiers Jack Silva (John Krasinksi), Tyrone Woods (James Badge Dale), Kris Paronto (Pablo Schrieber), Dave Benton (David Denman), and John Tiegen (Dominic Rumusa) attempt to hold off the invaders and wait for the cavalry to arrive – which, we know, becomes are serious issue. The cast does a good job at coming off credible, with James Badge Dale standing out as a believable leader. 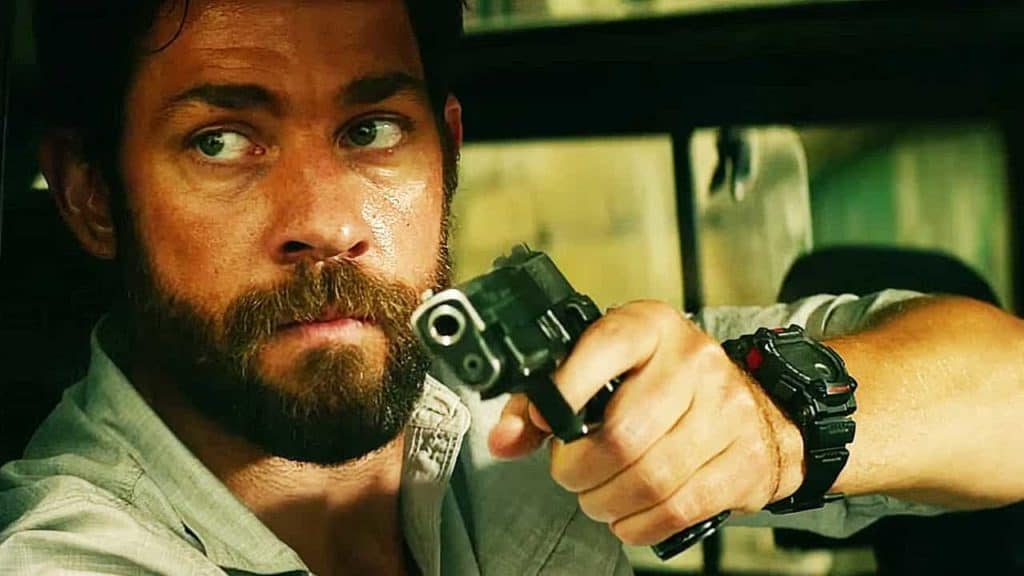 Simply by way of its true story plot and its chronicling of undeniable bravery, 13 Hours rouses political thoughts and feelings – what film isn’t at least a little political, after all? But Bay and screenwriter Chuck Hogan don’t push it. There’s only one brief throwaway mention of the “offensive” political film that may or may not have outraged the militia and sparked the attack, and absolutely no mention of the sitting secretary of state or her e-mail servers.

It’s understandable that the filmmakers chose to focus on the courage of the men in the moment of battle, warriors who certainly wouldn’t know or care about the causes as bullets fly past their helmets. However, many of the most interesting moments in the film hint at the logistics and bureaucracy that delayed assistance and complicated the situation. There are brief snippets of talking heads on TV monitors and discussions of nearby fighter jets that aren’t deployed, but nothing substantial enough to gets our fists raised in protest and deepen our anger at the plight.

Raw materials and ideas are there, such as the local “friendly” militia being undistinguishable from the enemy and woefully untrained. Unfortunately, that notion is reduced to running jokes about improperly handling guns, being killed by friendly fire, and manufactured tension. Instead of more connective tissue on that and similar matters, we get an American flag being riddled with bullets in slow motion and a bombs-eye view from an incoming mortar (recycled from Pearl Harbor).

At two and a half hours – much of that time a prolonged action sequence that becomes repetitive and memorable  mostly for insurgents burning themselves alive with Molotov cocktails, being run over by various bulletproof vehicles, and blown in half by heavy artillery – 13 Hours could use more context and/or a lot of editing. The seemingly unending ordeal may be true to life, but it doesn’t quite nail the right mix of valor, bloodshed, politicization, and story. It’s credible and technically precise without being particularly stirring.