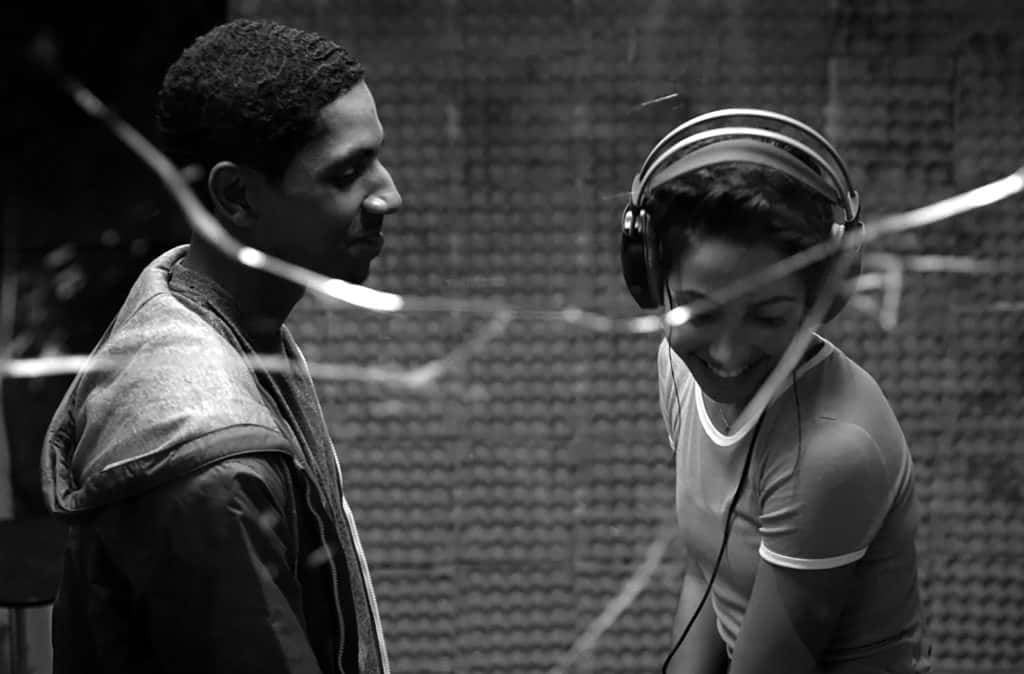 The full lineup for this year’s Harlem International Film Festival has been announced, which will be kicking off its 14th edition May 16 – 19. Shaan Couture‘s New York Scherzo and Paul Starkman‘s Wheels will be the opening night double feature, with Al Cohen‘s When Harlem Saved a King and Robert Rippberger‘s Strive being the closing night features.

Take a look below for the full feature lineup, and be sure to check out harlemfilmfestival.org for additional info including tickets and shorts, webisode, and VR lineups.

OPENING NIGHT
NEW YORK SCHERZO
Director: Shaan Couture
Country: USA, Running Time: 90 min
NEW YORK SCHERZO is a feature documentary that follows the lives of three diverse classically trained musicians as they try to make it in New York City. Originally from Seoul, Paris and Nashville they are passionate about their art but struggle to make a living, and face a crossroads where they must decide if they can sustain a career doing what they love.
Preceded by
ICE MOON World Premiere
Director: Alexander Frasse
Country: USA, Running Time: 6 min

WHEELS New York City Premiere
Director: Paul Starkman
Country: USA, Running Time: 80 min
WHEELS is a coming of age story about Max, a 19-year-old from Brooklyn who wants to be a well known DJ. He has been the sole provider for his sick grandmother, DJing parties for Oscar, a neighborhood shark. Things shift when Max’s brother Terry returns home after three years in prison, forcing Max to reconcile their relationship. Max gets close to Liza, the manager of a dance studio who inspires him with her work ethic and determination. Max finds himself at a crossroads between family obligation, the streets, and pursuing his dream.
Preceded by
ITCHING FOR A SCRATCH World Premiere
Director: Cortez McKay
Country: USA, Running Time: 8 min
An eleven-year-old Djay prodigy from The Bronx accidentally scratches a vinyl record. Theodore Livingston aka Grand Wizard Theodore went on to change the face of music forever and to influence countless artists the world over in the process.

CLOSING NIGHT
WHEN HARLEM SAVED A KING
Director: Al Cohen
Country: USA, Running Time: 90 min
Unraveling the 1958 stabbing of late Dr. Martin Luther King Jr. by a mentally ill woman named Izola Ware Curry with a letter opener. After being rushed to Harlem Hospital, had Dr. King nearly sneezed before they were able to remove the dagger from his aorta, he would have died and the Civil Rights movement as we know it today would have never happened.
Preceded by
THE POWER OF WRITING World Premiere
Director: Nancy Donnelly
Country: USA, Running Time: 6 min
When an innocent man is thrown in prison for a murder he didn’t commit, he finds an escape in writing. Criminal justice reform advocate Derrick Hamilton shows us how he used the power of words to write his way to freedom.
Preceded by
THAT MAGIC
Director: Maori Karmael Holmes – Hi Alum
Country: USA, Running Time:
A girl. A boy. A camera. Official music video for India.Arie’s single “That Magic” exploring a new love that was nearly missed.

STRIVE World Premiere
Director: Robert Rippberger (Harlem International Alum)
Country: USA, Running Time: 82 min
Written by Harlem native Sha-Risse R. Smith, this is a story about a teenage girl from the projects who pursues her dream of a great education, and a better life despite the odds.
Kalani (Joi Campbell), is a teenager living in Harlem with her older brother Jacob, and her younger sister, Bebe, while her mother struggles to make ends meet. Her college counselor Mr. Rose (Danny Glover) sees great promise in her educational future. As Kalani’s siblings get caught in a myriad of hardships, Kalani teeters on the brink of ruin as she struggles to keep both her family and her dream intact.
Preceded by
STILL HARLEM
Director: Lynn Dow
Country: USA, Running Time: 18 min
Following the incoming wave of gentrification, Becky moves to New York City to attend Columbia University and ends up renting a room from a man who yearns for Harlem’s past.

THE CRIP WHO LOVES YOGA World Premiere
Director: James Wvinner
Country: New Zealand, Running Time: 73 min
An urban Crip gangster and an outlaw biker from an Indian reservation turn their lives around with yoga. Experts explore how yoga is being used to fight the problem of over-incarceration in the merciless for-profit prison system.

DECADE OF FIRE
Directors: Gretchen Hildebran, Vivian Vazquez
Country: USA, Running Time: 75 min
In the 1970s, the Bronx was on fire. Abandoned by city government, nearly a half-million people were displaced as their close-knit, multi-ethnic neighborhood burned, reducing the community to rubble. While insidious government policies caused the devastation, Black and Puerto Rican residents bore the blame. In this story of hope and resistance, Bronx-born Vivian Vazquez exposes the truth about the borough’s untold history and reveals how her embattled and maligned community chose to resist, remain and rebuild.

THE DECAYING (NABUBULOK)
Director: Sonny Calvento
Country: Philippines, Running Time: 93 min
At a time when newly-elected president Rodrigo Duterte threatens to sever ties with the United States of America, an American expat in the town of Masapang is accused of killing his Filipina wife.

DOING MONEY
Director: Lynsey Miller
Countries: UK, Running Time: 87 min
A young Romanian woman is snatched from a London street in broad daylight, trafficked to Ireland and used as a sex slave in a series of pop-up brothels. Her shocking true story offers a tense and thought-provoking thriller exposing how, in modern Britain, slavery can hide in plain sight.

ELIADES OCHOA FROM CUBA TO THE WORLD
Directors: Cynthia Biestek, Ruben Gomez
Countries: Cuba/Mexico/France/USA, Running Time: 100 min
The film is a portrait of a poor country musician playing on the streets of Eastern Cuba and striving to meet the challenge of spreading his beloved traditional music around the world, who eventually finds success as an original member of the world-famous Buena Vista Social Club.

EMMETT New York Premiere
Director: Bridget Stokes
Country: USA, Running Time: 94 min
Emmett is a 12-year-old prodigy and junior at Heart High. After his older brother is accused of the thefts happening at school, Emmett must do everything he can to prove him innocent. He enlists the help of local crime novelist, Mary, to find the real culprit.

GET LITE
Director: Lance Steagall
Countries: UK/France, Running Time: 63 min
Litefeet legends Larry Smoove, Kidd Patt, and Jayy Black try to make a legitimate career of their dance ambitions. By day, they play a cat-and-mouse game with the police, piecing together a living dancing on the subway. By night, they live the plight of inner-city youth, with poverty, violence, and drugs on all sides.

GOLIATH
Director: Dominik Locher
Country: Germany, Running Time: 86 min
When Jessy tells David she’s pregnant, he panics. A few days later, the two are assaulted in the city train, and when David realizes he is unable to protect his girlfriend, his fears of inadequacy as a man take hold. Frantic, he resorts to steroids and begins with excessive strength training. Initially, the muscles give him self-confidence, but at what price?

HAWAII
Director: Jesus del Cerro
Country: Germany, Running Time: 116 min
Andrei and his father Vasile live in communist Romania. Unexpectedly, they receive news from Petrus, Vasile ́s brother who was assumed dead after his escape attempt years before. Petrus was living in Hawaii the whole time and on his death has left Andrei and Vasile a large legacy. They cannot inherit it, however, as the concept of private property does not exist in the eyes of the law. The alternative is to claim their inheritance in another country – easier said than done.

INDUS BLUES
Director: Jawad Sharif
Country: Pakistan, Running Time: 76 min
Pakistani folk artists talk about their struggle to keep a fading art form alive and remind the world what they are about to lose.

THE ILLUMINATION OF JIM WOODRING World Premiere
Director: Chris Brandt
Country: USA, Running Time: 97 min
Drawing from haunting childhood visions, cartoonist Jim Woodring reveals a beautiful, nightmarish wonderland. His artwork and stories breach the veil of mundane perception, and reveal deeper dimensions beyond, as Woodring discusses his career and process while revealing a wealth of artwork, some of which has remained private to this day.

KATRINA’S DREAM
Directors: Mirko Bischofberger, Dario Bischofberger
Countries: Italy/Switzerland, Running Time: 84 min
Katrina wishes to have children, but her boyfriend Louis doesn’t. She falls in love with his best friend Ron, who becomes the man of her life. One night, returning drunk together from a birthday party, the two friends are involved in a car accident in which Ron loses his head and Louis his body. Thanks to a head transplant the two men survive, merged into one person. Katrina must now deal with the body and mind of two men to fulfill her dream.

THE LAST AMERICAN COLONY World Premiere
Director: Mike Majoro & Bestor Cram
Countries: Puerto Rico/USA, Running Time: 90 min
In September 2017, Hurricane Maria pummeled the island of Puerto Rico, but it isn’t the forces of nature that have done the most damage to the 3.5 million American citizens who live here. A history of economic exploitation, forced dependency, and systemic racism coming from the US government have all wreaked havoc on an island that many see as the last colony in the western hemisphere. The film traces the life of Juan Segarra, who graduates from Harvard and sets off on a treacherous path to fight for Puerto Rico’s independence—a struggle that he rightly assumes will lead to either jail or death.

MADAGASIKARA
Director: Cam Cowan
Country: Madagascar, Running Time: 84 min
Three resilient women fight for better futures for their children in one of the most misunderstood countries in the world – Madagascar – a beautiful African island nation crippled by decades of political instability and crushed by international sanctions imposed in 2009.

MINOR INJUSTICE
Director: Jonathan Seaborn, Emily de Santos
Country: USA, Running Time: 69 min
Texas is now one of only 4 states that charges 17 year olds as adults. Current Texas sentencing laws ignore recent scientific evidence on adolescent development and neuroscience, and the state’s current parole system provides no viable mechanism for reviewing a case after a young person has grown up and matured. Can we morally keep sending our youth to adult prisons?

NO WAY OUT World Premiere
Director: Gabor Gasztonyi
Country: Canada, Running Time: 85 min
This film traces the lives of two middle-aged couples over five years. They began using injection drugs such as heroin and cocaine since childhood their survival is a testament to the power of the human body and spirit. Interspersed with Gasztonyi’s black and white images of Vancouver’s Downtown Eastside each person in the film tells their unique story of survival in an environment of physical and psychological adversity.

SEAMAN AND 207
Director: Sophia Tewa
Country: USA, Running Time: 78 min
Yacahudah Harrison and his wife Danetia Harrison have chosen to abandon their lives as working people with steady jobs to live on a street corner in upper Manhattan. As gentrification brings an invasion of new faces, the duo are sent on a journey of discovery, living and loving out of their van on Seaman Avenue and 207th Street.

WE ARE THANKFUL (SIYABONGA) New York Premiere
Director: Joshua Magor
Country: South Africa, Running Time: 94 min
WE ARE THANKFUL, named after main character Siyabonga Majola, is a South African docu-fiction film. Siyabonga, a young man from the township of Mphopomeni, one day hears that a movie will be made in a nearby town and makes it his mission to be a part of the film. A film based on real events, re-enacted by those who lived through them, we follow this extraordinary man as he does all he can to take control of his fortune.