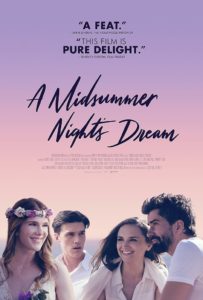 There are enough in-jokes (both among the entertainment industry and the Shakespearean canon) to make Casey Wilder Mott’s adaptation of A Midsummer Night’s Dream cheeky enough to work within its source material. Mott, a veteran producer and development executive, has moved the story’s setting from 16th-century Athens to 21st-century Los Angeles.

The film industry is renamed from Hollywood to Athens, and the name of the AFI has been amusingly adjusted, as its logo remains intact. Hermia (Rachael Leigh Cook) is a rising movie star; her father Theseus (Ted Levine) is a wealthy financier; and the dispute over who she will marry is divided between Hermia’s love, photographer Lysander (Hamish Linklater), and Theseus’s demand that she choose high-profile agent, Demetrius (Finn Wittrock). The metaplay central to the plot becomes a low-quality short film starring conceited actor Nick Bottom (Fran Kranz). The character of Puck (Avan Jogia) is a beach-dwelling bohemian.

Most of the dialogue is retained, though its structure is abridged to fit the brisk runtime. Eventually it seems as if the movie’s primary focus is to try and find the cutest fit for every element, as well as an auxiliary pun (such as a meeting being scheduled in room “2B,” followed by Bottom walking into the room next door, where the occupant explains it is “not 2B”). 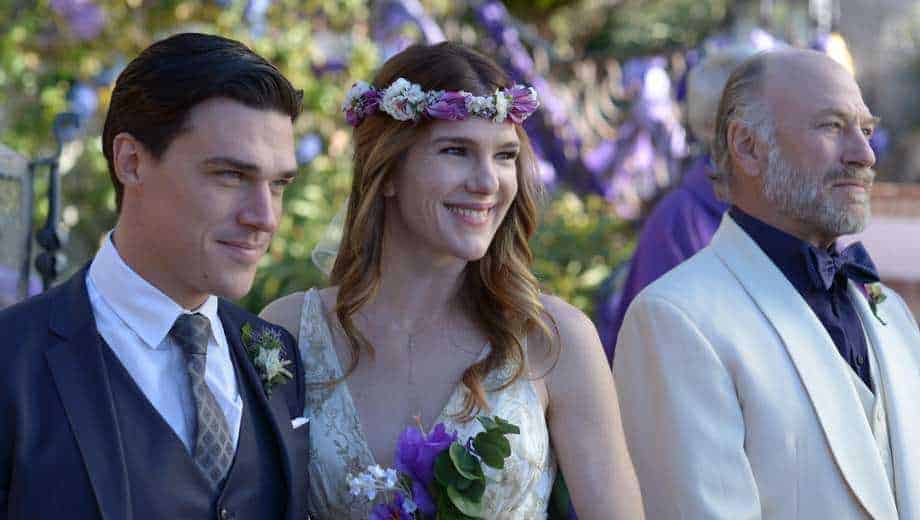 In all adaptations, it’s Shakespeare’s enduring quality that does all the heavy lifting. To Mott’s credit, he understands how effusively silly A Midsummer Night’s Dream is and captures its comic spirit between his own additions and the presentation of the text. But how far can this conceit go? Mott avoids the pratfalls that some other Shakespeare adaptations fall into and stays close to the source material’s central integrity when adding his own dialogue.

But beyond those contemporary tweaks, there’s little else here that’s explored at all. The locational shift is surface level, and the business involving the titular dreaming in the forest deviates little from its more classical interpretations. By this point, most of the irreverent comic twists are sporadic window dressing.

The capable cast can sell the material with enough gusto to keep us engaged, and Daniel Katz’s expressive, colorful cinematography plunges into the story’s fantastical realms; yet it’s hard to discern the audience for this kind of limited-range adaptation. The central joke of the new setting is quickly grasped, and every addition is an offshoot of that principle. 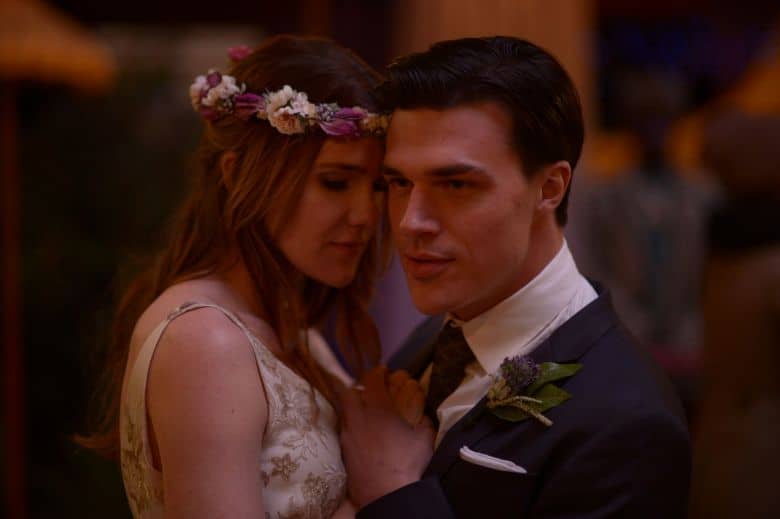 A Midsummer Night’s Dream is sufficiently smooth entertainment, yet it winds up as more of a test case for future efforts than anything else. Mott clearly has the wherewithal to undertake more ambitious reimaginations and excursions. And his actors, regardless of their history with Shakespeare, navigate the dialogue and intricate wordplay with great comfort. Yet when it has cut deep into the plot and has forced itself into the high-paced, low-volume natures of its style and substance, there’s too much winking at the camera in place of genuine consistency.

Although the pieces are all in order, with the talented players moving them about, it never connects with its alternate world as it keeps looking back into ours, waiting for our approval before inching to the next act break with its title cards emblazoning the transitions on screen.