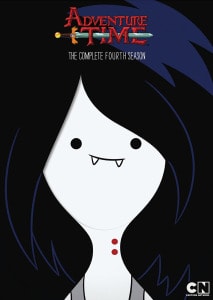 Although we rarely, if ever, talk about television shows on this site, Cartoon Network’s Adventure Time series is one that deserves as much coverage as possible. It’s a simple tale about a boy and his dog (who is also his brother) and the various adventures they go on throughout the land of Ooo, which may or may not be a post-apocalyptic future Earth. It’s wonderfully written, superbly animated and contains the type of subject matter and comedy that can easily be enjoyed by adults as much as children.

This week, the fourth season has been released on Blu-ray, and for fans of the series, picking this one up is a no-brainer. Contained within its great packaging is the entire 26-episode season, along with audio commentary for every episode by the show’s creators. But should you pick this up if you’re unfamiliar with the show or its many colorful characters? Yes.

Even though there are some running through-lines to the series, it’s a show designed to be picked up and enjoyed at any point. You’ll quickly form a bond with co-leads Finn and Jake and will become acclimated to the fairytale-like world they inhabit. Before you know it, you’ll be binge-watching these bite-sized episodes, eagerly wanting to know which crazy princess will be in peril next or what the duo’s next existential crisis may be.

Other than the commentaries, the only other special feature contained on the disc is a featurette that explores the music of the series and has plenty of clips and interviews with the writers who crafted some of the more iconic songs featured in the show. Even as I write this, the “Bacon Pancakes” song has yet again flooded my brain and will most likely make up the soundtrack of my life for the next week. Having no other bonus materials is a bit of a bummer, but it’s certainly not a deal breaker.

This show seems to be everywhere these days; in fact, the last convention I went to featured more people in Adventure Time cosplay than anything else, and it was a horror convention. If you think that this show isn’t your thing or you’re repelled by the rabid fandom it’s received, just give it a shot and, like me, you may find yourself surprised and delighted by just how incredible this show really is.

I’m not even one to buy many TV series on Blu-ray, simply because I know I’ll never re-watch them, but this is a show that can only benefit from re-watches. If you do pick it up, make sure to check out the audio commentaries, as they provide a really interesting inside look at how many of the episodes came to fruition.