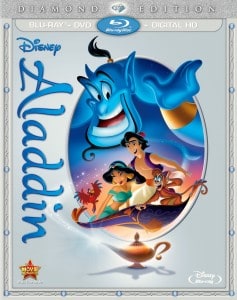 Disney’s 1992 hit classic, Aladdin, is now available in a Blu-ray/DVD/Digital HD combo pack that the studio is calling the film’s “Diamond Edition.” The animated tale about a poor thief who manages to get his hand on a magic lamp, release the genie inside and win over the heart of a princess will no doubt be a nostalgic return to the world that so many of us grew up watching in our living rooms on our VHS tapes.

I, myself, memorized all the songs (and most of the spoken lines) years ago. There was just something so captivating and memorable about all the comedy and magic that engrossed us into this movie. In fact, if I had to throw out all my Disney films and could keep only one, this would be it. That said, the accompanying features in this edition (in stores now) are hit or miss for me, and I wasn’t super impressed by the combo pack as a whole.

The transfer of the film onto Blu-ray is fairly high quality, both visually and audibly, and the final product is packed with features, although only a few were noteworthy. As you might have guessed, there are several sweet tributes to the late Robin Williams, who voiced the boisterous, blue genie, including a feature that walks viewers though each of the genie’s transformations into famous celebrities and a feature with several of Williams’ crazy outtakes. 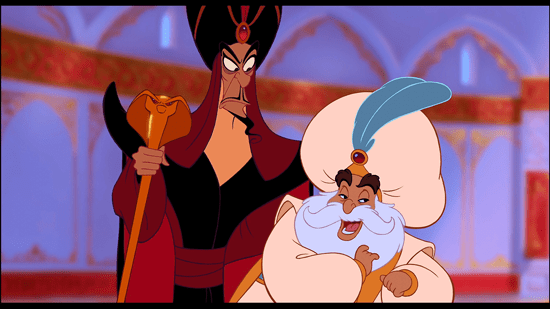 There is also a relatively interesting discussion about the film’s adaptation to a live-action show. For those who don’t know, “Aladdin” has been a Broadway hit for quite some time here in New York City. If you have seen, or plan to see, the “Aladdin” live show, you might get a kick out of the behind-the-scenes interviews with the actors who play the titular “street rat,” Princess Jasmine, the villainous Jafar and The Genie, as well as the anecdotes that they share about all the bumps they hit while making the elaborate show what it is today.

For the most part, the original features from the film’s DVD release are also included, and there are some fairly annoying and forgettable featurettes and music videos. It really leaves a lot to be desired if what you really wanted was more information about the animation – not a somewhat strange profile of the animators – the film’s legacy, the original voice actors/singers, etc.

If you don’t yet have a copy in your home and either want to share this film with your children or re-live the adventures of Aladdin yourself, go ahead and pick up a copy. The picture looks great on high-resolution screens and will transport you to “a whole new, new world” as it did me.