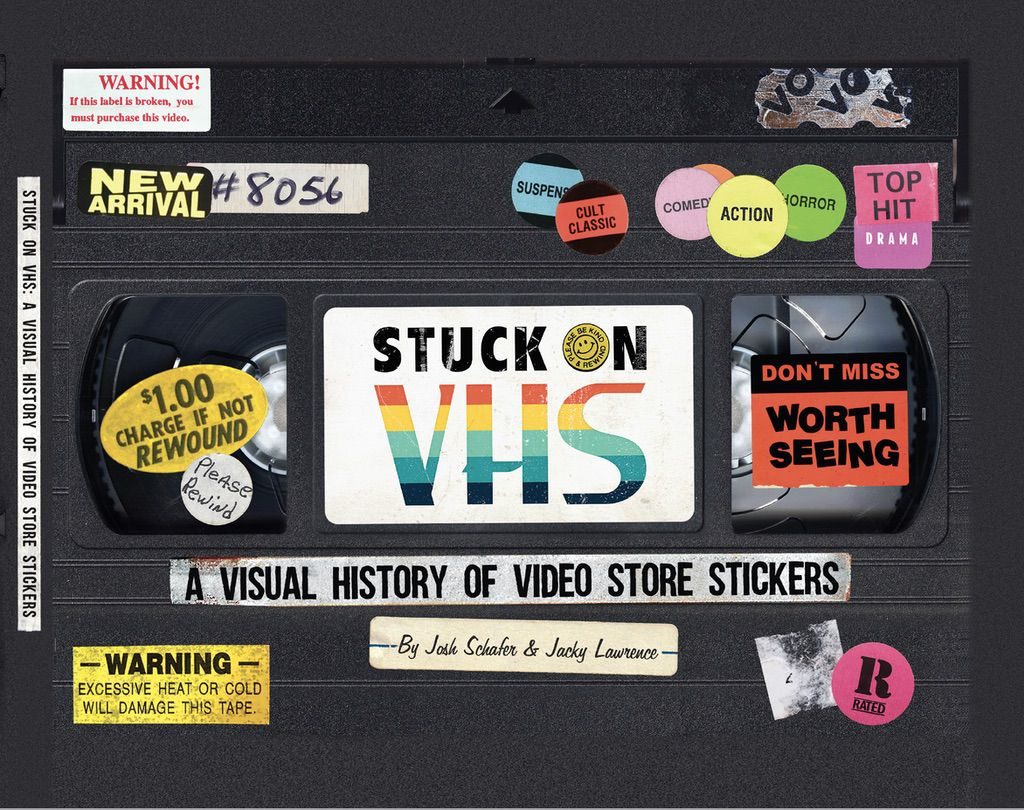 In today’s things I need to buy immediately column, the Alamo Drafthouse announced they’ll be launching a new publishing arm with their first book being a history of video store stickers, those amazing little reminders of a bygone era that was snuffed out far too soon. Stuck on VHS by Jack Schafer and Jacky Lawrence celebrates the time of the video store by presenting a collection of those wonderful little stickers many of us will remember from video store tapes, along with essays and, of course, peelable stickers- three pages worth.

The book launches at the first stop on the Found Footage Festival’s VCR Party Tour in Austin on January 8th. It will be on sale at Alamo Drafthouse locations and on MondoTees.com January 20th. Take a look below for the full release regarding the book.

Austin, TX — January 6, 2020 — Alamo Drafthouse Cinema is spending the first weeks of the new decade celebrating an iconic part of film history: the VHS tape. The company is launching a publishing arm with the new book by video historian Josh Schafer, Stuck On VHS: A Visual History of Video Store Stickers. The new book launches in conjunction with the much-beloved Found Footage Festival’s VCR Party Tour, with the first stop in Austin, TX at Alamo Drafthouse South Lamar on Wednesday, January 8, and continuing on to Downtown LA (February 10), Denver (February 22), Brooklyn (February 27), and San Francisco (April 8). The book will be available for sale at Alamo Drafthouse theater locations and MondoTees.com on January 20.

“90% of the movies from the silent era are gone forever,” says Tim League, Alamo Drafthouse founder and CEO. “Sadly, we are seeing that tale transpire again with VHS today. A huge wealth of amazingness is disintegrating before our eyes, and this time it isn’t art from 100 years ago, it is from the 1980s. Josh is Alamo Drafthouse Cinema’s VHS Culture Captain, a role not often found in ours or any industry. I’m really proud of his book, a love letter to this fragile era in our recent history, and I’m equally proud of his work to spread the excitement and awesomeness of VHS treasures in general.”

“These stickers capture a time and place, not only as important design and communication specimens from a distinct era,” says Stuck On VHS author Josh Schafer. “But also, these pieces of video store ephemera help us more distinctly remember and understand the incredible and vibrant world of video rental stores.”

Stuck On VHS is just the latest in Alamo Drafthouse’s commitment to keeping the video rental store alive. Since 2017, the company has opened Video Vortex rental stores inside its Raleigh, Brooklyn, San Francisco, and Los Angeles locations, with plans for more in 2020.

Meanwhile, the American Genre Film Archive, the Alamo’s film archival and restoration arm, has kicked off an initiative to properly transfer and permanently store countless rare films and projects that were only ever released on the VHS format.

Stuck On VHS: A Visual History of Video Store Stickers
If you were living on this planet in the 80s or 90s, chances are you have fond memories of your local video store. Stuck On VHS brings the VHS era back to life through its small but essential ephemera: rental stickers. These stickers capture a time and place where movies mattered and video stores ruled! Stuck On VHS also contains essays by Lunchmeat editor and Video Vortex culture captain, Josh Schafer, and three peelable pages of rad stickers for your own VHS collection.

GUNPOWDER MILKSHAKE Gets a New Trailer