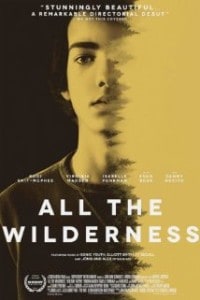 Yet another trite configuration of the tired elements that always seem to make up these coming-of-age dramas. The only surprising and, perhaps, original aspect of writer/director Michael Johnson’s debut, All the Wilderness, is how uninspired it all feels. No one, on-screen, gives the impression that this is, in fact, a story that needs to be told; yet, told it is by frustratingly going through the motions with little to no passion.

Kodi Smit-McPhee gets the task of playing the gangly sulkster James Charm. And, no, his surname is not an indication of his character’s personality; actually, quite the opposite as we follow this Charm character around, one quickly realizes that he only operates in various shades of one mode – a sullen, mope pile.

Why so mopey? Well, that’s because James’s father recently passed away, the details of which are slowly unveiled throughout the film, and thus has left him in an understandable state of grief while trying to discover a way to effectively cope with his loss.

Roaming around the wilderness of the city of Portland, James befriends a magnificent pianist/maybe homeless person, Harmon (Evan Ross), who chaperons James into the Portland nightlife of drinking, drugging and partying (and even some shoplifting). This newfound nighttime itinerary turns out to be the perfect place for Johnson, and cinematographer Adam Newport-Berra, to go full-on music video mode with the visuals. While, the montages do inject the film with some semblance of energy, it remains one sequence in a series of many that diverts the focal point of the film without adding any depth to the proceedings.

One of the more bewildering inclusions of stylized visual representations are the hooded figures, all-clad in black, that are stalking James throughout the night as a visual rendering of James’s self-doubt, anxiety and fear. These sequences (along with more subtle inclusions of the same ilk) seem to imply that James is currently suffering from sort of budding mental illness that is contributing to a diminishing emotional mind-state and psyche. Yet, all these implications are under-developed (perhaps, entirely halted) or, worse, treated with such a casual tone, ultimately rendering the implication of serious mental illness as inconsequential at best. Even the psychologist played by Danny DeVito appears to be uninterested in James’s emotional dysfunction opting to spend his visits whittling in lieu of doctoring.

We didn’t even get to the poetic voice-over. Smit-McPhee recites a Carl Sandburg poem throughout while also reminiscing about his father’s wilderness-themed gems of wisdom hinting towards the aforementioned illness yet, simultaneously glossing over it as nothing more than a creative flourish of poetic surface-level symbolism.

All the Wilderness is not a out-and-out terrible film, but it does happen to stand as a trivial affair within the coming-of-age drama and/or reconciliation amid grief style of films. Surprisingly, even the unavoidable injection of a by-the-numbers, blossoming romantic interest, Val (Isabelle Fuhrman), fails to add any heart to a film desperately attempting to conjure emotional responses. Johnson’s debut is everything you worryingly expect it to be and, even then, is not a memorable or engrossing version of predictability.