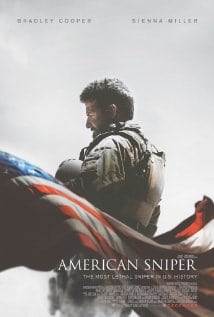 Clint Eastwood’s portrait of Navy SEAL sniper Chris Kyle may as well be titled Call of Duty: American Sniper. Not to further highlight Kyle’s unambiguous dedication to his missions in the Iraq War – which isn’t left in doubt here, but because the repetitive pattern of deployment-battle-sniping plays out like a videogame, eventually leading to a couple of big bosses that need to be taken out. Perfunctory stretches back stateside with his wife and growing family are mere cutscenes, highlighting commonplace laments of the military household before shipping out for another tour. It’s a cycle that never finds discerning commentary or meaningful human interest.

The film opens with Kyle (Bradley Cooper) perched on a Fallujah rooftop analyzing a potential threat to soldiers on the ground and deciding whether to shoot a woman and child. With finger ready to squeeze the trigger, we flash back for a half hour of set up. We get a quick lecture from Kyle’s father, a rodeo performance, enlisting after the U.S. embassy bombings in Africa, SEAL training, meeting and marrying wife Taya (Sienna Miller), and deploying to Iraq after 9/11. Nothing in the extended flashback informs the tense scene when we get back to the rooftop and see the choice Kyle makes. Eastwood establishes blunt characterizations and plainly staged action with no clear stakes and repeats the pattern throughout.

The psychological effects of proficiently killing people you don’t know from a distance are left largely unexplored. We know Chris is stressed in one stretch back home because he has high blood pressure and his head snaps up when the neighbor fires up the lawnmower. There’s no wallowing or developing the increasing toll PTSD is taking on his psyche.

Cooper is perfectly adequate in a role that only requires a beard, a bit of bulk, and a warbling Texas drawl that is occasionally unintelligible. As long as we get the other half of his conversations we can glean the simple meaning in scene after scene where characters say exactly what they’re feeling. Everyone says what they mean and means what they say, which perpetuates the banal portrayal of events. It’s a curious choice when dealing with what should be complicated thoughts and emotions. Miller really gets the short end of the stick with the whiny wife only existing to say things to her husband like, “when you’re here, you’re not really here.” Deep.

Just as shallow is the sequence of events during Kyle’s four tours in Iraq, building to a battle with a brutal enforcer dubbed “The Butcher” and, later, with an enemy assassin. Eastwood and screenwriter Jason Hall, working from Kyle’s biography, make no forays into complicated morality, obsession, or psychosis.

It’s rooftop after rooftop, house sweep after house sweep, until an ultimate goal is reached. Kyle nor any of his brothers in arms show any uncertainty. And, apparently, we aren’t supposed to question any tactics either because most every Middle Eastern character we see is a terrorist or terrorist sympathizer. The shooting and “oorah” battle cries play out in what feels like a hackneyed ‘80s actioner leading up to a showdown of sniper vs. sniper in a climactic battle where one combatant must pull off an impossible shot.

When the battlefield drama reaches its mechanical conclusion, Eastwood offers only a cursory look at life after the war and its effects on Kyle. His ultimate fate is abruptly handled with a quick title card that feels like a complete cheat and avoids having to tell the truly interesting part of the story – a man haunted by the lives he took and the brothers he couldn’t save and trying to come to terms with all of it. It’s a borderline offensive misstep in storytelling.

The tagline featured on the film’s poster bluntly states, “The most lethal sniper in U.S. history.” By the end of American Sniper that’s essentially all we know about Chris Kyle.