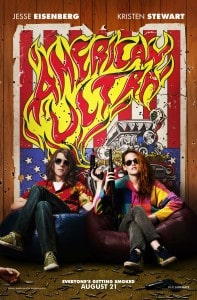 In mashing together Pineapple Express and The Bourne Identity (among several other better movies), American Ultra never settles on which film to borrow from most heavily. The premise is filled with potential and the very nature of the film gives it an offbeat wit in the first act, but the stoner comedy and uber-stylized violence don’t come together to sustain the drollness. What could be chaotic fun is instead a disjointed mix of farce and bloody combat that’s occasionally interesting as an oddity, but is tonally strange and often obnoxious.

Jesse Eisenberg plays Mike Howell, a panic-addled pothead living in small-town West Virginia with girlfriend Phoebe (Kristen Stewart). Mike’s unaware that he’s a highly skilled C.I.A. operative, but ambitious middle-manager Adrian (Topher Grace) still deems him a threat and orders his execution. Getting wind of the plan, Mike’s trainer Victoria (Connie Britton) activates the sleeper agent so he can fight back. As Adrian and his team of trained killers set up camp in rural West Virginia, Mike fights off waves of assassination attempts while protecting himself and his beloved Phoebe.

With all of the disorder going down in the fictional town of Liman (as in the director of the first Bourne film), it’s always clear that American Ultra is, at the very least, in on its joke. That’s “joke,” as in singular. Screenwriter Max Landis (Chronicle) has concepts, but no points. The script never digs for anything deeper than surface-level references or obvious chuckles. Clunky transitions from slick, choreographed actions scenes – staged nicely by director Nima Nourizadeh, to one-liners are awkward. It almost appears as if the first draft of the script was either straight-ahead action or comedy and the other element was shoehorned in retroactively. 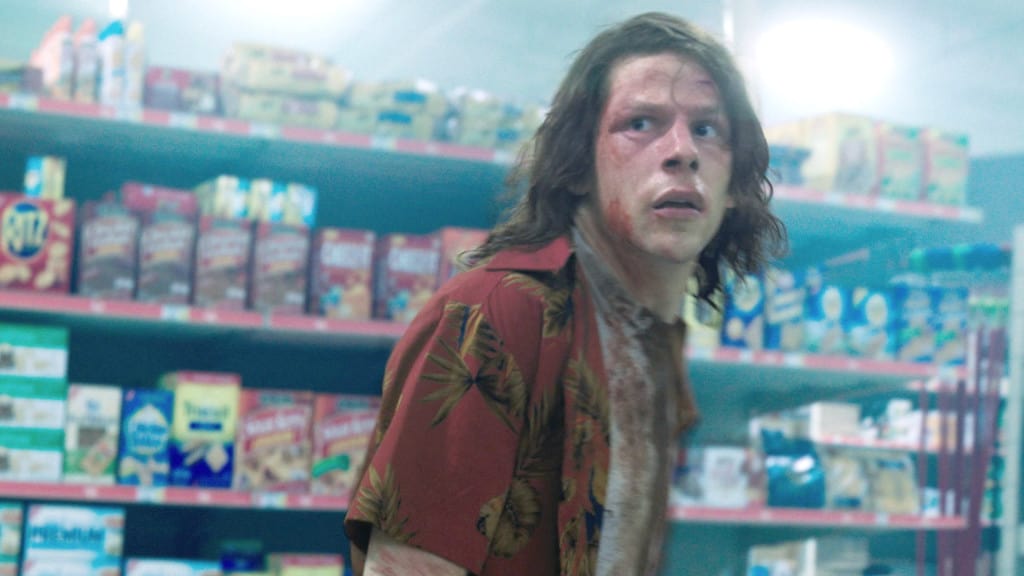 Eisenberg and Stewart help make some of the unpleasantness bearable. They have good chemistry and each displays a sense of timing worthy of much better material. The couple sells the disappointment of Mike’s anxiety derailing a dream vacation, establishing his crippling phobias and her seemingly unconditional acceptance. From there, they aren’t given a lot of dimension. Eisenberg hits Mike’s twitchy naivety and almost squeezes comedy from a half-hearted joke in which he deduces that his newfound powers signify that he’s a robot.

Supporting characters aren’t given much of a chance in the over-plotted jumble, either. Grace and Britton are rough sketches with weak motivations and are mostly wasted as information dumpers. The usually interesting Walton Goggins plays one of Adrian’s assassins, dubbed Laugher. His character trait is that he laughs a lot during fights with Mike. There’s some hogwash about the troubled pasts and tortured existence of those taking orders from power-hungry Adrian, but, like most elements in the film, it never gels with anything else. We get far too little of John Leguizamo as Mike’s unwise yet affable drug dealer, though perhaps we long for him only because everything else going on is so uninteresting and unfunny.

American Ultra is also structurally weird, starting with a bruised and battered Mike in agency custody and then flashing back to the beginning after running through evidentiary photos that spoil some of the film’s surprises. By the time the action kicks into high gear, we aren’t really wondering how a spoon or a frying pan factor into the carnage – with no forward momentum, we don’t really care.

An out-of-place-feeling epilogue followed by an energetic animated closing credits sequence suggest the preceding adventure was some sort of wild ride, but the warring spasms of ferocity and slacker clowning are a dulling experience. It’s as if the dealer is swearing they’re giving us kush, but it’s obviously ditch weed.