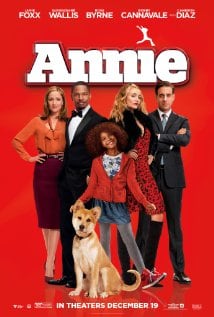 It can be difficult for a remake to justify its existence, and the 2014 version of Annie offers only sketchy modernization to differentiate itself from the 1982 film and 1977 Broadway musical. Changing the name of Daddy Warbucks, turning the character into a cell phone mogul, and integrating social media isn’t nearly enough to avoid a stale sense of familiarity. The superficial contemporary spins from director Will Gluck and his co-writer Aline Brosh McKenna are uninspired in their concept and flat in their execution. It also doesn’t help that the cast (of a musical) is populated with non-singers and non-dancers.

Attempts to force the notion that this Annie is different are ill-fated from the very beginning. A fair-skinned redhead tap-dances and sings a report to her classroom. She sits and a new Annie (Quvenzhane Wallis) takes her place, delivering a speech on FDR’s New Deal.

21st century Annie is also not a “little orphan,” she’s a foster child in the care of boozy Miss Hannigan (Cameron Diaz), who collects government checks for the handful of girls in her charge. The songs “Hard Knock Life” and “Tomorrow” are belted out early as a matter of obligation, hastily outlining the bond Annie has with her roomies and her optimism that one day she’ll be reunited with her birth parents.

Jamie Foxx is one-percenter Will Stacks (“stacks” is super-stylish lingo for lots and lots of money – I’m hip), the cellular billionaire who’s making a New York City mayoral run. Campaign manager Guy (Bobby Cannavale) and overworked assistant Grace (Rose Byrne) protect Will’s public image, which gets a bump when he saves Annie from getting hit by van. A video of his impromptu heroism goes viral and Guy seizes upon the goodwill by moving the foster child into Stacks’ luxury penthouse. Bonding montages and tepid conflict ensue.

The transformations of Annie and Stacks by way of mutual affection are just as glossy as the penthouse’s “smart home” technology. There’s no interest in exploring Annie’s removal from poverty, the film turning her into the same thing politically-minded Guy does – a prop to push a saccharine agenda. Stacks is portrayed early on as a germaphobe literally sickened by the poor, using Purell constantly after interactions. It’s not quite clear exactly when or how Annie melts his heart, but Wallis and Foxx have good enough chemistry to make the relationship feel somewhat genuine.

The remainder of the cast is wildly uneven. Byrne is her usual charming self in the first act, but looks extremely uncomfortable during her two big musical numbers and loses all distinction when it is required for her to become a love interest. Cannavale and Diaz act as though they’re in a farce, exaggerating their tame, cartoonish villainy to the point of irritation. Their duet is probably the most painful few minutes of the film, the lip synching and dancing reminiscent of a bad drama club production.

None of the musical numbers enliven Annie as it sputters through the necessary narrative strings. Choppy editing is used to mask the bland choreography, the musically unseasoned cast unable to sustain a fluid song and dance performance. Wallis’ natural charm and spirit shine through in the title role, but you can almost see her counting off the rudimentary dance steps in her head. That’s indicative of the production as a whole, a calculated effort that‘s artificial in its appeals to today’s tween audience while draining the personality from the characters and removing the feeling from the anthems.