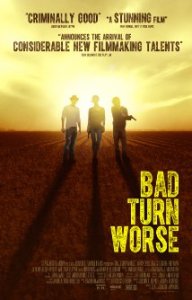 Bad Turn Worse proudly wears its noir influences on its dusty sleeve, using a desolate Texas setting for a familiar story of characters getting wrapped up in a web of crime that’s impossible to untangle cleanly. What’s not so familiar is the trio of teens at the center of predicament who are too naïve to be hard boiled but cognizant enough to be desperate.

First-time feature directors Simon and Zeke Hawkins and screenwriter Dutch Southern are little too precious in their citing of influences, with cutesy quoting of author Jim Thompson (The Getaway, The Grifters), but fare better when adopting a general pulpiness that breezily establishes character and plot. A debate in a diner (one of Tarantino’s favorite settings) about whether to call a southern breakfast staple “biscuit and gravy” or biscuits and gravy” is an early highlight.

That conversation is between Sue (Mackenzie Davis) and Bobby (Jeremy Allen White), recent high schools grads eager to escape to college and become a rare success story from this town. The film hit the festival scene last year with the title We Gotta Get Out of This Place, which is certainly apt in the cases of Sue and Bobby, though probably a little too evocative of the 1965 pop-rock hit.

Bad Turn Worse fits just fine, too. B.J. (Logan Huffman), Sue’s blockhead boyfriend, wants the trio to have one last hurrah and steals a pile of cash from his boss, Giff (Mark Pellegrino). The teens head to Corpus Christi for a night of beer drinking and goofing around, which is probably pretty close to what they usually do, only there, they get to do it in a pool surrounded by palm trees. B.J. and Bobby arrive back at work as an irate Giff mercilessly beats an employee he thinks stole the dough. Bobby takes the blame to halt the beat down, but now all three friends must face the consequences. Giff orders them to steal even more money from an even bigger menace, local gangster Big Red, who launders cash through Giff’s cotton mill.

As the teens work up to the big event, angst over their futures bubbles to the surface. Sue and Bobby are clearly a romantic match, something everyone knew but now has to deal with. B.J. was going to be left behind by his friends, but the extenuating circumstances amplify his emotions and he tries to exert a level of control over the robbery that threatens its success. The three key performances are all steady, but the standout is Davis, who possesses a natural beauty and charisma that has her targeted for future stardom. Pellegrino is also great as Giff, portraying a dangerous dunce that can astonish in both his absurdity and his viciousness.

While performances are strong, they can’t totally enliven a somewhat droopy middle section of the film that fusses with the workings of the plot or a climax that we know (especially based on one of the pull quotes from Thompson) will contain a curveball or two. You can’t help but occasionally view the characters as merely means to that end, though they never completely lose a unique identity.

Beyond direct comparisons to a celebrated genre author, the filmmakers show flashes of uncommon confidence for a debut feature, be it with restraint or a bit of quirk. A narrated walkthrough of the heist that has characters stopping to ask questions directly into the camera is a fun touch. Less showy is a scene where the local sheriff (Jon Gries) delicately explains to Bobby that he cannot intervene. Choosing words carefully, he says without saying that he’s on Big Red’s payroll, and this is the way the world works. It’s a great representation of the circle of life in this outpost. B.J. is destined to become Giff, who is destined to become Big Red; if they can survive that long, that is. And folks like Bobby and Sue are in danger of being caught in the crossfire unless they’re able to get the hell outta that place first.