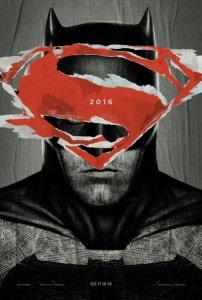 If Christopher Nolan’s moody Dark Knight trilogy could ask Batman v Superman: Dawn of Justice a question, it would be: “Why so serious?” Director Zach Snyder is so concerned with the brooding and the bombast of a superhero conflict with dire potential consequences, there’s no time left for actual heroism. If Nolan’s films were a grounded, darker take on DC comics, Batman v Superman is the oppressively bleak version. The Man of Steel and The Bat of Gotham are laser-focused on battling each other ideologically and finally, after much fretting, physically, and the movie loses sight of the tangible stakes.

Things start off interestingly enough. Bruce Wayne (Ben Affleck) arrives in Metropolis during the mayhem of Man of Steel’s climax, with buildings crumbling and citizens scurrying. He rushes into the 9/11-evoking cloud of ash, concerned about the employees in his building. Why said employees needed a frantic call from Wayne telling them to evacuate as other buildings implode seems a bit weird, though. It’s also strange that Gotham and Metropolis are just across the harbor from each other, and that Clark Kent (a reporter and superhero) doesn’t know a lot about Batman (a vigilante in the huge city just a few miles away). But logic isn’t a concern of Batman v Superman.

Anyway, fast forward 18 months and Wayne/Batman is seething over the actions of Superman, and trying to discover weaknesses in the god-like being. Meanwhile, Superman (Henry Cavill) rescues Lois Lane (Amy Adams) from terrorists in Africa, prompting a U.S. Senator (Holly Hunter) to call for regulation of the alien’s unchecked power. Pulling strings behind the scenes is wealthy businessman Lex Luthor (Jesse Eisenberg), looking to unlock the secrets of Kryptonian technology and manipulate the situation – to what end, however, is never made clear.

There’s a bit of Wayne’s backstory we have to endure, though thankfully, after seeing Batman’s origin several times on screen, in print, and on TV, it’s kept bare bones. To establish the haunted mind, however, we get a lot of Bruce Wayne nightmares. Even nightmares within nightmares. And apparently we can add precognition to Batman’s powers because in one dream he sees a dystopian future with other DC characters/storylines that haven’t happened yet (in the movies). Gotta shoehorn all this stuff in somehow, though, and dream sequences are a convenient (lazy) way to do it. 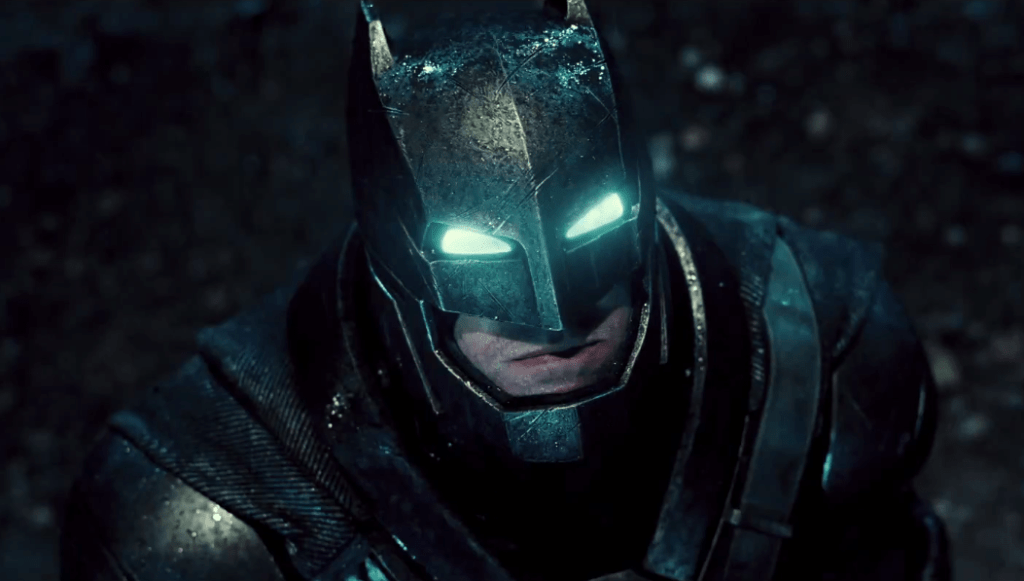 Affleck bulked up and possesses credible girth and physicality as Batman, and he even gets to do a bit of the detective work that’s a hallmark of the character. None if it is inspired, though. The Caped Crusader is downright cruel in action, maiming and killing with little regard for justice. A few scenes may be a bit intense for younger kids, with their hero acting as judge, jury, and executioner with no oversight and no one to answer to. Isn’t that the very thing that’s causing his anger at Superman?

When he does slow down to investigate Luthor, his methods make no sense. He surveils a site, tracks a shipment (with a very conspicuous tracking device), and chases a semi, only to be sidetracked by Supes. He then steals the thing anyway five minutes later; he also could’ve stolen it easily earlier. But then we would’ve missed out on having a chase with the Batmobile. A dark, loud, pointless chase.

The clunky writing and choppy editing throughout makes little sense of anyone’s motivations. Cavill has potential as Superman, but a majority of his action involves saving Lois. He’s given one quick montage of good deeds before being turned into a plot cog, something to be argued about and used to get to the final act battle.

The most baffling character is Luthor, played by Eisenberg as a petulant Millennial. Perhaps he’s intended as the comic relief amid the weariness, but Eisenberg is way more annoying than amusing. There’s no explanation of why he’s a prominent public figure – other than being a rich heir – but he appears to have achieved some level of reverence and influence. And if his endgame goes as planned, there’s absolutely no way for him to control what would happen afterwards. He might be evil, but he’s no genius.

It’s a shame Adams’ role is 90-percent being in peril. The other 10-percent involves being naked in a bathtub and being a terrible reporter working for terrible editor (Laurence Fishburne). The only character that works is Diana Prince, aka Wonder Woman (Gal Gadot). Her introduction is weird, just kind of hanging around and conducting her own detective operation. But when the finale calls for a battle against a colossal CGI monster, she springs into action and is the only one who actually comes off as heroic. After Batman and Superman drop the “v” and team up – thanks to a completely ridiculous reason – Wonder Woman helps save the day with no motivation other than defeating the bad guy.

But she’s too little too late. As is the playfulness dropped into the climax that can’t erase all the joylessness that preceded it. As is typical in cinematic universes now, there’s time devoted to building to what’s next (2017’s Justice League), and a lot of false endings that quickly wrap up what was so arduously established in the film’s first two hours. Batman v Superman possesses an extra layer of annoyance, giving one false ending, awkwardly cutting to another, and then cutting back to the first one for yet another revelation. None of them satisfying.

Overlong, oddly plotted, often incoherent, and over-serious while lacking nobility, Batman v Superman misses the point of what makes Batman, Superman, and larger-than-life heroes in general, great in the first place. There’s nothing to aspire to here.