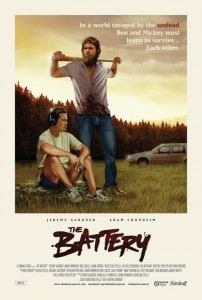 It’s movies like The Battery that make me want to stop writing about movies and start making them myself. To see what a small crew with no budget can do is nothing short of astounding, and re-watching this film on the newly released Blu-ray reinforces the fact that indie horror is not the stagnant pool of mediocrity most may think.

If you’re not familiar with this one – and you should be – the plot revolves around two former baseball players caught in the zombie apocalypse who are just trying to survive. Interestingly, there are very few zombies in the film, and the narrative instead focuses on the dynamic of the relationship between the two men. This subdued approach to the genre brings with it a fresh take on zombie film, one that is desperately needed.

The story unfolds through a series of events that the two friends, played by Adam Cronheim and the film’s writer-director Jeremy Gardner, must endure. For fans of long, single-take shots, there are a few choice ones here, one taking nearly ten minutes. The Blu-ray release really makes the impressive visuals pop, making this low-budget horror flick look like something David Gordon Green or Terence Malick would fabricate, had they the gumption to make a zombie movie.

The Battery was one of my top-rated horror films of last year, along with Resolution, and – as if the stars were suddenly in perfect alignment – one of my favorite distributors, Scream Factory, signed on to release the Blu-ray.

As with most Scream Factory releases, this Blu-ray comes with a two-sided cover, an excellent transfer of the film, and a crop of bonus features. I’ve stated before that I believe Scream Factory to be the Criterion Collection of genre films, and that statement holds up with this release.

Most notably, on the Blu-ray comes a feature-length documentary about the making of the film. Unlike some shoddy making-of docs just thrown onto a disc for good measure, this one could stand on its own as a separate release altogether, like Robert Rodriguez’s Full Tilt Boogie.

The Battery is a fantastic movie with an equally fantastic Blu-ray release. It’s a film that doesn’t reinvent the wheel, but rather one that takes a tired formula like the zombie movie and completely flips it on its rotting head. As far as the home release goes, the documentary alone is worth picking this one up, as it thoughtfully and entertainingly looks at the horrors of making a low-budget indie. Check out The Battery today, and I think you’ll be pleasantly surprised in what you find.