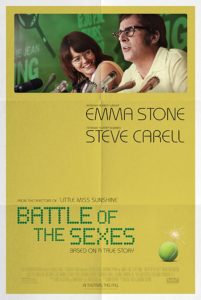 There is Emma Stone as Billie Jean King, and then there is the rest of this movie. Battle of the Sexes plays like its own outline, dutifully moving from scene to scene under the most workmanlike of precisions.

It lives off the inherent drama of its source material, recreating the 1973 tennis match between King and Bobby Riggs (Steve Carell), which, because of King’s feminism and Riggs’ chauvinism, is depicted as an athletic referendum on the women’s liberation movement. The script isn’t interested in the idea that there could be more nuance to the events as they’re portrayed. It saves all of its development for the scenes involving King coming to terms with her sexuality and dealing with the immense pressure of the media circus surrounding the event.

Stone is up for the challenge as always. Directors Jonathan Dayton and Valerie Faris, working from a script by Simon Beaufoy, push in enough to allow their lead actress to shine yet don’t go any further. In a story based on fairly recent events, involving real people, there’s only one character in the film who feels like an actual human being.

Have a look at anyone else, and you’ve entered The Twilight Zone. We watch Carell chewing the scenery, spouting off eccentric and misogynistic remarks with a wink and a flourish. That’s all well and good, but Battle of the Sexes fails when it attempts to broaden its scope and depict him as a husband and a father. A subplot about his gambling addiction gets passed around and tossed in whenever a bit of dramatic flavor is required. It’s a device.

Battle of the Sexes is momentary entertainment. It takes a part of sports history and makes it a little nicer, tighter and neater. There’s no wrongheaded move that dooms the whole thing, but there also aren’t many moments that seek to understand what’s happening and why it should matter. Everything is handled with a matter-of-fact sameness. The budding romance between King and her hairdresser, Marilyn (Andrea Riseborough), exists only to pay off in scenes when she talks to her husband Larry (Austin Stowell). It happened, so it is acknowledged.

A common rule of thumb for a documentary is whether it’s more insightful than a book would be on the same subject. When you make a fictional film based on real events, there is a similar question. Surely any capable journalist could conduct enough interviews to form a more complete, multi-dimensional portrait on the real match. And if we wanted to focus on King herself, then why divert from her perspective at all?

The tennis scenes are shot perfunctorily, in static wide shots, with all the flair of a mid-level sports network. It’s emblematic of the film’s smoothened-out dynamic. Whenever the movie does come to life, it’s thanks to the quality of Stone’s performance and the inherent desire we have for her character to succeed. Sometimes there’s a spark when it comes to depicting the total carnival that Riggs conjured up and conducted. It’s these sporadic bolts of lightning that serve to underline the overall  clamminess of the project. Considering that the actual Battle of the Sexes was such a publicized to-do, the movie should be a great deal more energetic.

If the rating system on this site exists to indicate how enthusiastically a reviewer would recommend a given movie, then the needle just tips over into the green zone. At the end of the film, we have the industry-standard title cards explaining what happened to the participants after the events. The credits roll. The lights come up. You look at the time. That’s two hours. You walk out of the theater, and then what?

You were happy to stay for the entire runtime and enjoyed seeing Stone portray a well-known figure with insight and depth, but what else is there? Nothing was learned; nothing was provoked; nothing was gained. The movie begins and ends on the same idea and the same notes. At least they’re well-played ones.