Richard Linklater’s latest film appeared on the festival circuit almost a year ago and finally made it to theaters everywhere last week.  It is not only one of the best films currently in theaters, but I promise it is one of the best films of the year so far.  Based on Skip Hollandsworth’s 1998 Texas Monthly article about Carthage, Texas, resident Bernie Tiede, Bernie is told in a docudrama style.  Linklater’s decision to tell a true story in this fashion is not novel, but the specific choices he makes – e.g., combining townsfolk interviews with straightforward scenes of the characters in action – are as close to perfect as a director’s choices could be.  What also nears perfection is Jack Black’s performance.  He is Bernie from the first moment, inhabiting this extraordinarily unique character, and owning it until the last scene.  I believe Bernie births one of the first Oscar-worthy turns of 2012.

We are introduced to Bernie as he gives a presentation on cosmetology for the recently deceased.  It is a fantastic scene as the mild-manner, soft-spoken, and frankly effeminate Bernie provides key details as to how to best prepare a body for funeral home viewings.  As he says, you want to keep the head straight, not “star-gazing” nor “naval-gazing,” and with a slight turn to the right so as to welcome one’s viewers.  The head of the funeral home in Carthage hired Bernie (originally from Louisiana) over the phone to become the assistant funeral director.  Bernie takes great pride in his work and goes above and beyond the call of duty.  He treats each funeral as a major event, planning each one down to the minutest detail.  His sales method itself is a work of art.  He is the definition of a “people person” and “social butterfly,” paying close attention to the more elderly women who have lost a loved one.  He is also deeply involved in the local church and town-at-large, participating in the community theater, and is undoubtedly the most generous man in Carthage. 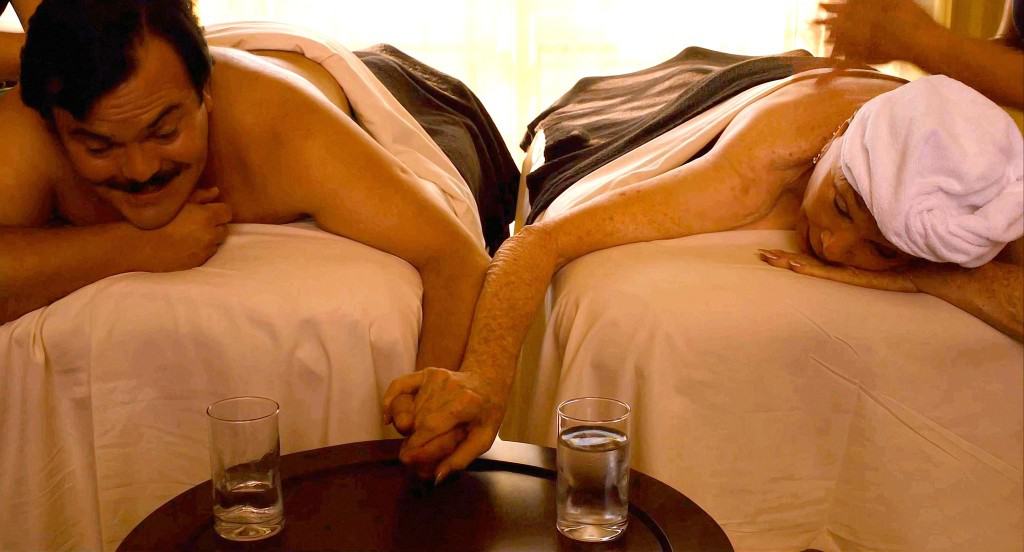 When wealthy businessman Mr. Nugent dies, his widow Marjorie (Shirley MacLaine) becomes the wealthiest woman in town and takes over her husband’s bank.  While Bernie is deeply loved in Carthage, Marjorie’s reputation is just the opposite; she is hated by everyone in town.  Even her own family cannot stand her or she them.  But Bernie begins to “court” her, reaching out to her the way he had other town widows.  At first, she is stand-offish, but soon warms to Bernie.  They begin to travel together, she adds him to her bank account, gives him power-of-attorney, and cuts her family out of her will and includes Bernie instead.  Their close relationship is the talk of the town as Marjorie softens . . . for a little while.  Then, without provocation, she reverts back to her sour disposition and treats Bernie as her servant.  She is jealous of his time and deplores his pristine reputation among the townsfolk.  One day, he reaches his breaking point, shoots her four times in the back, and places her body in the garage freezer.  After all, he needed to preserve the body so that she could one day be given a great funeral, preferably overseen by him.  For the next nine months, he uses the powers she gave him to continue to conduct her business and spend hundreds of thousands of her dollars for the betterment of Carthage and its residents.  If not for her busybody investment broker, Lloyd, Bernie might have been able to continue even longer.  Sadly, he is found out and confesses.

During her disappearance and upon his confession, we see more of the county district attorney Danny Buck (brought to incredible life by Matthew McConaughey in one of his best performances).  He makes it his mission to bring Bernie to justice (his previous mission simply consisted of getting reelected).  Buck asks for a venue change not because the defendant cannot get a fair trial in Carthage but because he knows Bernie will be acquitted by the locals; in fact, they tell him over and over again that either Bernie did not do it (despite his confession) or that if he did, he had a good reason for knocking off Marjorie.  A judge grants the venue change to another county and a short-and-sweet trial occurs.

The interviewees for the “documentary” consist of both real townspeople who knew Bernie Tiede and Marjorie Nugent and character actors you have probably never seen before.  The fact that one cannot tell who is “real” and who is an actor is a testament to the casting and the script.  These interviews provide nearly every laugh in this dark comedy – and believe me, there are plenty of laughs.  For these interviews, the true story itself, and for Jack Black’s brilliant performance, Bernie is an absolute must see.