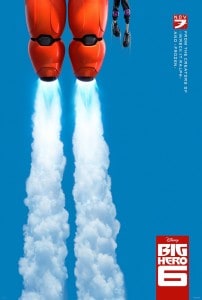 Superheroes have taken over the multiplex and the rush isn’t slowing anytime soon. Comic titans DC and Marvel recently unveiled schedules for a dizzying amount of films to be released over the next half-decade; announcements that were met with squeals of glee from insatiable fans. Amid the perpetual hero hype it makes sense that Disney, which acquired Marvel Entertainment a few years back, would be eager to combine that mania with their acclaimed animation work. Enter Big Hero 6, an obscure Marvel Comic team that, with some liberal tweaking of the source material, is ripe for Disney retrofitting. The film isn’t a revolutionary comic-to-screen adaptation and feels too familiar at times, but it’s an entertaining adventure set in an interesting near future world that’s a joy to explore.

In San Fransokyo, teen robotics genius Hiro (voiced by Ryan Potter) uses his intellect in unscrupulous activities, believing the scholastic endeavors of older brother Tadashi (Daniel Henney) are nerdy. A tour of San Fransokyo Tech changes Hiro’s mind when exposed to the projects of Tadashi and pals Wasabi (Damon Wayans, Jr.), GoGo (Jamie Chung), Honey Lemon (Genesis Rodriguez), and Fred (T.J. Miller). The most intriguing experiment is Baymax (Scott Adsit), a balloon-man robot nurse that is programmed to feverishly cater to a patient’s medical needs. In hopes of gaining admittance to the school, Hiro wows renowned Professor Callaghan (James Cromwell) with a demonstration of microbot technology. When a terrible accident destroys Hiro’s invention and turns his world upside down, Baymax’s sole focus becomes helping Hiro overcome his grief. A kabuki-masked villain appears using the microbots for nefarious purposes, and Hiro turns Baymax into a battle bot and calls on his science lab friends to help save the day.

Big Hero 6 excels at presenting the hybrid city of San Fransokyo and making it feel like a lived-in, metropolis mashup. The sidewalks in front of Victorian rowhouses are dotted with cherry blossoms and recognizable structures like the Golden Gate Bridge and Transamerica Pyramid are given a Japanese architectural makeover. It’s not just broad strokes, either – this is a place of detailed tech, from the unexplained dirigibles hovering over the city to the abandoned warehouses that host illegal remote-controlled robot battles. It’s a place where college kids can master electromagnetics and an inflatable robot nurse doesn’t get a second look when walking down the street, even though it’s the first of its kind.

Baymax combines Disney saccharine with superhero spectacle. The malleable character works first as a (literally) marshmallow soft, caring friend for Hiro, and then as an instrument of revenge that can be programmed in the martial arts and outfitted with a flying metal suit. He’s the heart and soul of the film, and somewhat of a beacon of selflessness in an advanced world where the threat of misused technology looms large. His intentions are the purest possible, hunting down the villain only because it will assist in the emotional treatment of his patient. There are allusions to complicated themes of revenge and obsession that have potential to cut a little deeper than typical family-friendly fare, but when the well-established Marvel blueprint of a final act kicks in, everything is buried in a flurry of flashy outfits and a blizzard of recognizable action. We even get a character in a metal suit flying through a dimensional portal that isn’t satisfactorily explained, a la The Avengers finale.

As soon as the team-up happens and the science studs become defined by their self-designed powers, Big Hero 6 loses some of the magic. Baymax and Hiro feel like uniquely defined characters in early scenes when they first discover the villain or bumble around town as Baymax’s battery runs on empty, but jetting over the city and smashing through concrete walls reduces them to necessary means to bag a baddie. While it doesn’t fully deliver on the promise of the world it creates, Big Hero 6 is able to transcend the tropes with a brisk pace, vibrant visuals, and an uncommon dose of benevolence.