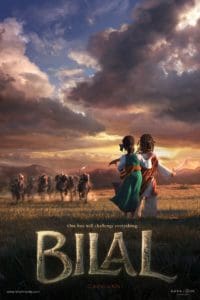 It is a considerable challenge to handle Bilal: A New Breed of Hero with any deft when my status as a white, western film critic positions me as wilfully ignorant of any of the cultural significance loaded into its deeply religious story. The first animated feature to come out of the United Arab Emirates, Bilal declares itself as the film to lionize in in era where we champion the importance of representation in popular cinema.

The film is based off of a parable pulled from the historic Bilal ibn Rabah that moralizes equality under the threat of oppression, both external and internal. Bilal, the filmic idea, is something I would be more than happy to advocate and rally around as a signifier to the ever-widening international animation market, but Bilal the film product does its imbued importance no favors.

Strip away the significance of its mere existence and A New Breed of Hero is a perfunctory moral tale laced with pseudo-inspirational platitudes that vaguely resemble the proposed legend of its source material. Incapable of transmitting the significance of Bilal ibn Rabah ironically makes this film play virtually indistinguishable from its animated Christian cousins, outside of its proudly Middle Eastern surface of course.

Bilal the figure, we are surreptitiously told, toils in slavery in the religiously mercantile village of Hejaz, which substantiates the poor’s suffering by selling them on idol worship, after the tragedy that befell his mother. Bilal is a dreamer of sorts whose mother instilled in him from an early age the incessantly repeated moral of this narrative: that the true chains of oppression don’t appear around your bodies but, instead, around your heart and mind and other important interior bits.

Although only one of the many functionally barren bromides in Bilal’s lexicon, this one proves the most rehashed and follows our hero from his passive rebellion to his master up through his ascendancy to a leader of his own constructed community. Along the oddly inert path to freedom, the film traces with much interstitial leaps in time.

Bilal makes allies with the Master of Merchants Abu Bakr, who buys his freedom; Hamza the Warrior, who teaches him to fight; and other characters who I am sure are precious to this culture.

I wasn’t expecting an explainer on the figure you dramatize, but if you want to compete on the international market, where you so desperately want your film to appear, you have to realize that a purely superficial dramatization only serves to make your claims of grandeur unintelligible.

The script, though, is far from the most detrimental aspect of Bilal’s cross-cultural appeal because, even if polished by the storytellers at Pixar themselves, the animation and filmmaking could make any treatment seem wooden. Playing like a proof of concept crossed with a demo reel for the animation software, Bilal drifts ever so closely to the uncanny valley of 3D computer animation, with its dead-eyed models devoid of expression and their stiff, preformative movements that look almost human.

I mentioned this was a first animated feature from this country, and that fact makes itself apparent in how its pristine models in all their rigidness grapple with the dramatic turns of the script but can never quite hit those emotional levels. Although the textured level of the design work is moderately impressive, the film never comes close to an interiority, as we never shake the uncomfortable artificiality of the animation to buy into this world or its smooth, flawless inhabitants.

In what I can only assume was an effort to hide these synthetic historical figures from our view, directors Alavi and Jamal engage in overly theatrical filmmaking that cycles through the needlessly flashy camerawork and effects like they were flipping through camera presets in their choice of software. It provides no service to the story – which, as a biopic with some admitted liberties, should be the primary focus – and only renders the cinematic space unintelligible to parse out.

A final battle serves as the climax to Bilal’s journey of oppression or religious integrity or freedom or whatever moral they tack onto him, and because of the shooting method, it remains a maelstrom of copy-pasted models awkwardly running into each other as the camera trips over itself to find the most dramatic angles to suitably feel “epic,” as it were.

Knowing that, as an animated film, you can put the camera anywhere is not carte blanche to put it everywhere you can possibly dream up, and this kills any good will the film was able to build into its narrative. I’ll admit that some of the plot points, though painfully familiar, were delivered with a degree of tonal severity that the animation and filming just cannot match.

While watching Bilal, I was reminded of the recent Pixar film Coco – which, while also walking a weathered plot thread, was able to deliver a resonating message on top of a directly related moral to its audience. While considerably unfair to compare this humble first effort to the latest blockbuster from Pixar, the point stands that Bilal fails at establishing its central hero for any of the teaching points you graft onto him. Stymied by the lackluster animation and plodding narrative, Bilal fails to rise to the supposed importance instilled into this production.