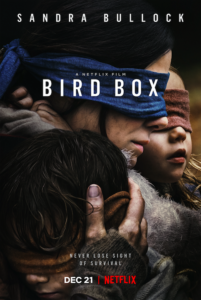 Although this particular review will fail it, I call on all future reviewers to attempt the “Bird Box Challenge” when breaking down the many narrative shortcomings spawned by the premise of Susanne Bier’s Bird Box. The challenge requires you to explain why this film fails to rise to the promised thrills and potential of its outlandish story gimmick without building a textuality of the numerous post-apocalyptic films you can’t help but think of while watching.

While based on the Josh Malerman novel of the same name, the utter prosaic approach to the oversaturated genre and depreciated sense of personality would have easily had you believe that Bird Box was just thrown together by studio executives trying to cross the twists of nearly 10 years of post-apocalyptic fiction into one super movie that could check all the boxes and maximize profits. Though utterly souless in execution, a handful of strong, centering performance allows this Netflix original to stick out, despite some of the fatuous story trying and failing to frighten you. 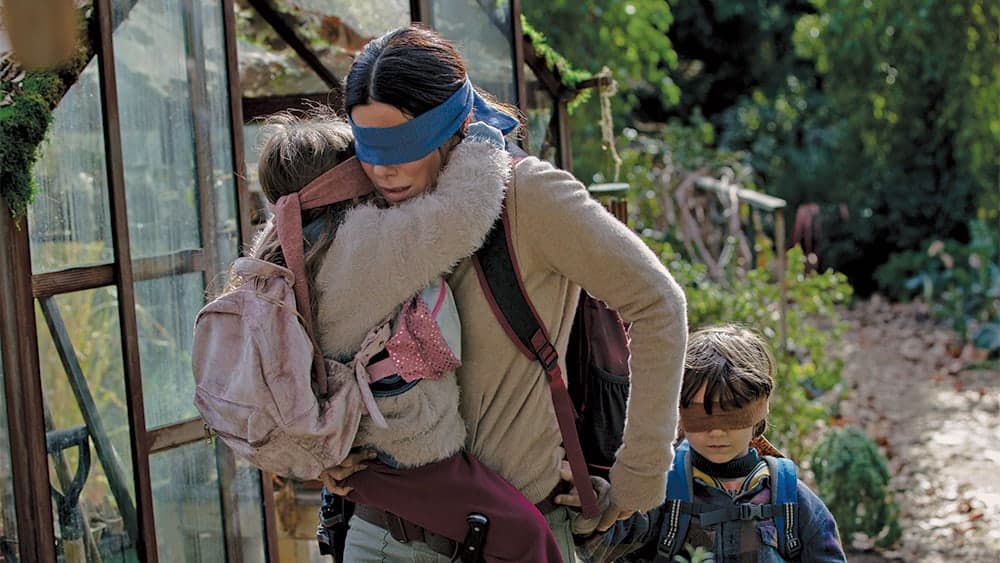 It’s a shame, too, as this represents the latest from screenwriter Eric Heisserer, who has been building a cottage industry out of scripts about indescribable malicious entities that have to be decoded before they can be combated (Final Destination 5, Lights Out, The Thing and the excellent Arrival). This time the world is at the mercy of an invisible, unexplained force, which, if glanced upon, causes the victims to fastrack themselves to committing suicide in any way available. The hook is that the survivors in Bird Box have to contend with remaining blindfolded whenever they have to venture out into the open because whatever this presence is, it at least can’t affect you indoors for reasons unexplained.

The “rules” of how these things work remain a contentious and frustrating issue with the film, stalling any hope of getting invested in the premise. They are non-corporeal yet get picked up by car sensors and move the air around them; they can affect you through video; they “take the form of your worst fear or saddest memory”; and they can speak to you in the voice of someone you know. The running list of conditions that Bird Box keeps pulling out for its poorly constructed threat drags the film down and renders most of its attempts to induce fear incomprehensible.

Attempting to survive against these ill-defined things is Malorie (Sandra Bullock), a pregnant artist who, once the “outbreak” occurs, shacks up with an eccentric group of one-note archetypes (“old woman,” “drunk asshole,” “hysterical conspiracy theorist”) to wait it out. The film is divided rather pointlessly between this timeline of the group getting acclimated to the apocalyptic scenario and five years later, with Malorie and two children taking a suicidal trip down a river, blindfolded to an apparent sanctuary at its end. 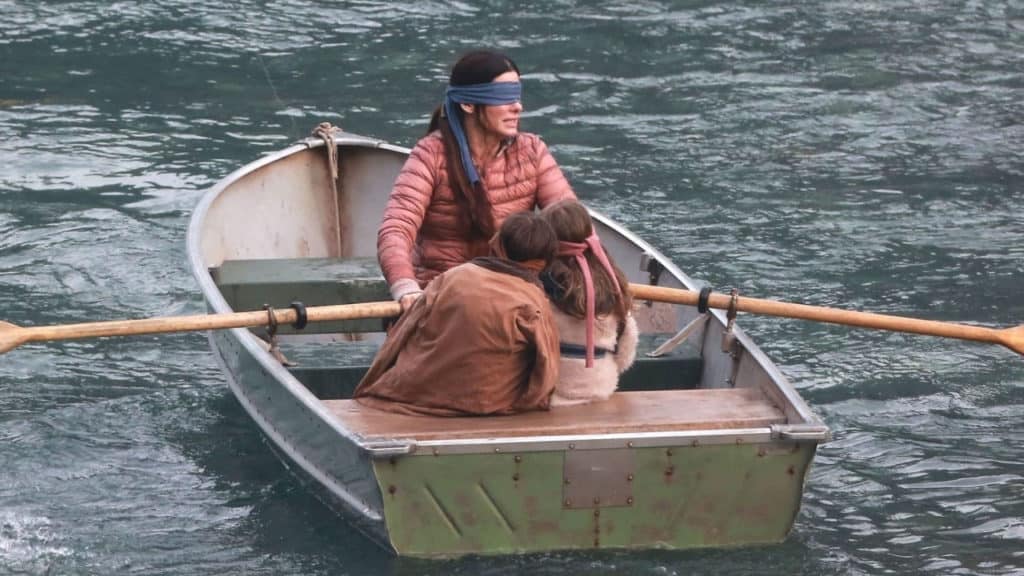 The bisecting and interchanging of the timeline throughout the film doesn’t add anything to either side of the story, as it all rolls out relatively expectantly. The former timeline is marred by group politics, betrayals, disagreements and enough misfortune to lead to the latter, which is defined by an aggressively maternal Bullock repeatedly scolding the kids to follow her orders. Neither aspires to many scares, unfortunately, because bickering and infighting aren’t particularly chill inducing, and, while they may be blindfolded as they drift downstream, the film doesn’t make use of being cut off from sight to any detectable narrative advantage.

You’ll hear this film described as hybrid, “The Happening meets The Quiet Place,” but like it or not, one cannot deny that Krasinski’s film milked his premise for all it was worth and wrapped a taut, tense horror film around its gimmick of sustained silence. Blindness doesn’t so much inform or structure the narrative as it does occasionally serve it, appearing vital when it is necessary for moments of cheap excitation but ultimately never developing past a scare tactic. 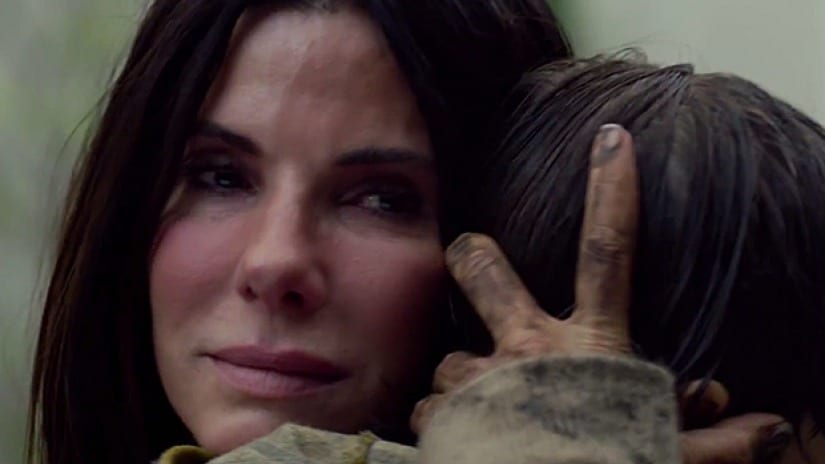 With a threat as ill defined as these entities, whose functionality keeps expanding, as if the film is perpetually stuck in its own the pitch meeting. (What if the criminally insane aren’t affected by it? Wouldn’t it be cool if animals could sense it?). Bier and Heisserer try and fail to wring any moments of palpable fear out the contrived plot at work in the source material.

Though its saving grace is its cast – with strong performances by Bullock, Trevante Rhodes, Lil Rei Howery and John Malkovich – wading through the levels of inanity at work in Bird Box proves too much for even their combined talents. The overfamiliarity of its apocalyptic premise and its unending points of reference make this a film you’ve simultaneously seen before and need never see again.