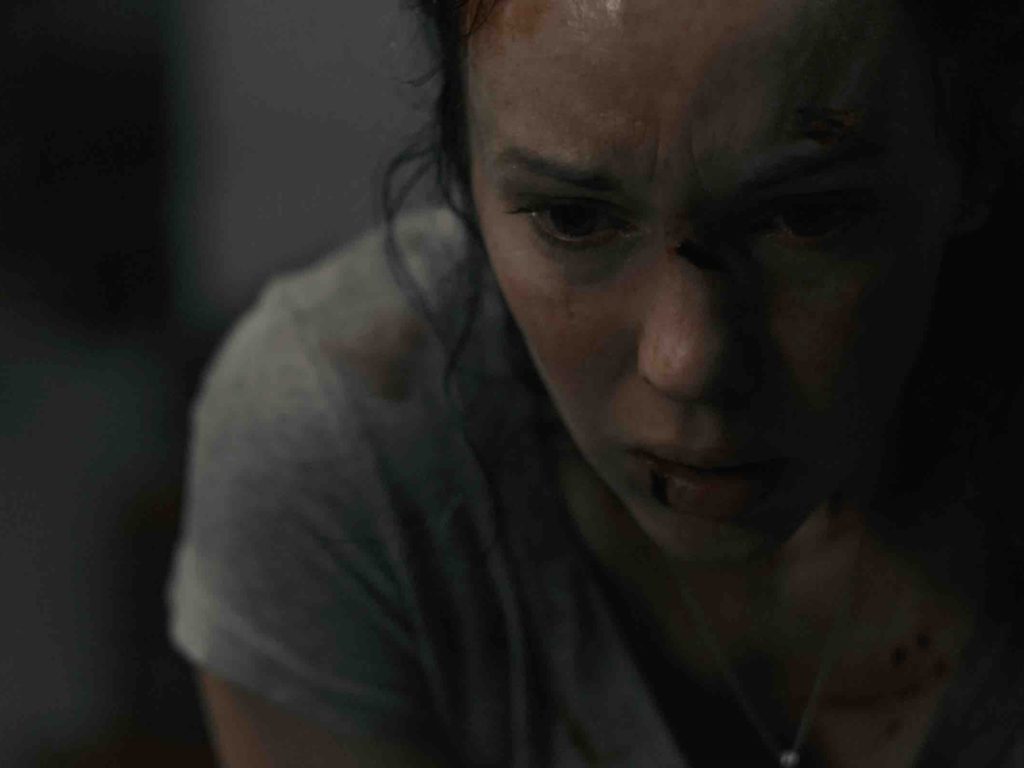 Matthew Pope’s feature debut, Blood On Her Name, is a well crafted, Southern-fried, neo-noir with a heavy reliance on tension, and while this method doesn’t always quite work, audiences are still in store for a satisfying crime thriller.

The film hits the ground running, opening with a dead body on the floor of a mechanic’s shop and a battered woman named Leigh, played by Bethany Anne Lind, holding the murder weapon. In the first of several blunders, she decides to hide the corpse in the trunk of the victim’s car after wrapping it up in plastic.

The next day, she goes to the dead man’s home, only to discover that he had a girlfriend and a son. Wrought with guilt and the mounting stress of having a body on her property, Leigh writes a note to the family and places the body in a shed on their property, but realizes she may have lost a necklace somewhere along the way, setting in motion a series of events that may have disastrous consequences.

Leigh is a complex character, and Lind expertly navigates her rapidly eroding nerves as she attempts to juggle her business; her son and his past behavioral issues; her father, who is not only is the town sheriff but also perpetrated some heinous acts of his own in her past; and, of course, the issue with the murder.

There’s a lot bubbling under the surface of this seemingly straightforward thriller, and Pope creates a solid balance for the most part, fleshing out the characters and their motivations while filling in the blanks at a steady clip. We learn bits and pieces about Leigh’s past through periodic flashbacks of her as a child, shedding some light on what happened between her and her father and what left her clearly scarred as an adult.

These moments of magical realism are well orchestrated and effectively complement Leigh’s rapidly deteriorating mind as she scrambles to fix things. Still, their presence is a bit jarring at first in a film that otherwise keeps things so grounded.

Another minor annoyance was Leigh’s motivations and decisions regarding nearly everything surrounding the incident. She seems like a fairly street-smart individual, and yet nearly everything she does is a misstep. Certainly, it stands to reason that people make irrational decisions when under immense amounts of stress, but that doesn’t mean it wasn’t aggravating to see her continuously make these seemingly bone-headed choices.

For being such a lo-fi affair, Pope manages to keep a lot of balls in the air, juggling most of them without issue, but certain plot points feel a bit neglected, like what was going on with Leigh’s son, Ryan, played by Jared Ivers. Her relationship with her son was worth a deeper exploration, considering a large portion of the narrative involves him learning to grow up outside of his criminal father’s shadow. Ryan’s arc, or lack thereof, hinges upon Leigh’s involvement with him, as the perspective is planted squarely on her, so despite Ryan’s story being slightly more shallow, it can be argued that’s because Leigh wants him as far away from what’s going on as possible.

There’s also a perceived amount of tension that seems to be constantly building as Leigh’s life unravels more and more with each passing moment, but this tension isn’t quite as palpable as I believe the filmmaker’s intended. It is exciting, and I was intrigued to see where this would go next — or how Leigh could somehow make the situation worse for herself — but I never quite felt on the edge of my seat, worried for Leigh and her kin.

Still, Blood on Her Name is a solidly delivered noir with a great performance from Bethany Anne Lind and an ending that circumvents the norms.