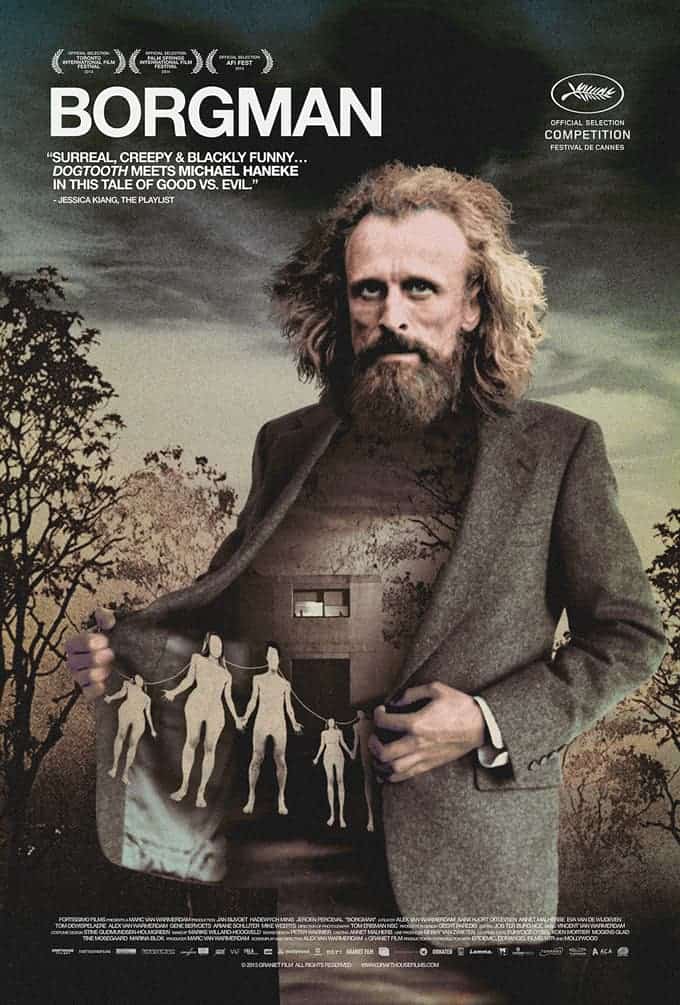 Borgman, the latest from Dutch director Alex van Warmerdam, is finally coming to theaters stateside after a lengthy festival run, accumulating numerous awards and just as many confounding reactions with its eccentric emulsion of various religious mythologies housed inside a meticulously clean and crisp visual presentation. It must be said that the optimal way to experience Borgman, is to go into the film blind; it’s best that the viewer knows little to nothing about this film in order to fully get lost in its peculiar proceedings.

The film focuses on Camiel Borgman (Jan Bijvoet), a smartly dressed vagrant – who may or may not be a fallen angel – and who at the very beginning of the story has been snuffed out of his elaborately constructed subterranean abode by a padre and his henchmen. Now at the pinnacle of homelessness, Camiel traverses the affluent communities in search of a nice, hot bath; simply walking up to the front door and politely asking the homeowner. Of course he’s quickly dismissed due to his disheveled appearance, not to mention the fact that normal people do not go door-to-door requesting hot baths. One of the myriad of reasons normal people do not go door-to-door with bath requests is presented when Camiel happens upon the home of Richard and Marina (Jeroen Perceval and Hadewych Minis), wherein his inquest is met swiftly with face-punching, rib-kicking and a forceful stick-beating.

Oddly enough, Richard’s brutal display of perceived dominance awards Camiel with Marina’s sympathy, thus granting him a foot in the door and that hot bath he’s been seeking. Now that the man has been reinvigorated with a nice soak and a glass of wine, the film shifts gears into home invasion territory, albeit of the cordial variety.

Van Warmerdam perpetually renders the story intriguing by first throwing the viewer into the deep end without context or explanation then building on that perplexing foundation with layer after layer of furthering, seemingly unexplainable, strange developments. Camiel tells stories involving child-consuming, lake-bottom-dwelling beasts or his smattering of elaborate poisonings and unusual corpse disposals, not to mention his nocturnal occupation of a Fuseli-inspired incubus fostering a chasm between Richard and Marina.

All of the film’s strange occurrences are wonderfully delivered through Bijvoet’s fantastic performance as Camiel, selling every surreal development with an air of enigmatic nobility but soft spoken in his approach to methodical mayhem. Borgman is also sold through cinematographer Tom Erisman‘s equally methodical camerawork and framing choices consisting of perplexing images that are presented in a somewhat overly organized way. Everything is crisp, clean and modern, almost clinically so, but van Warmerdam never brings everything into focused meaning for the viewer, opting instead to bury the stage and retreat into the woods with a few more followers.