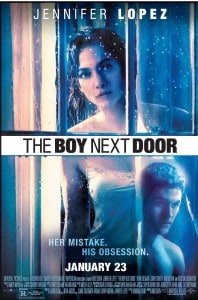 I’m not privy to her financials, but I don’t think Jennifer Lopez is in dire straits. The woman is a corporation, J-Lo, Inc., complete with fragrances, a sunglasses line, and many other money-making ventures. She’s being paid tens of millions of dollars to spout clichéd critiques and encouragement to starry-eyed aspiring singers on American Idol. She doesn’t need The Boy Next Door, and we certainly don’t need it, either.

Lopez plays Claire Peterson, a high-school literature teacher living with her teen son Kevin (Ian Nelson) and separated from an unfaithful husband (John Corbett). Young stud Noah (Ryan Guzman) moves in next door to care for his ailing uncle. Claire and Noah are very neighborly – she cooking for him and he fixing garage doors and mentoring Kevin. As Claire watches from the window, Noah works under the hood of a car as the sweat on his biceps glistens in the sun. Shared glances and flirting escalate, and Noah ropes the suburban mother into a night of sex. Claire is quick to call it a mistake, while Noah refuses to let it go. He goes from sweet to psychopath in rapid order, and an extremely low-rent interpretation of Fatal Attraction ensues.

As presented, the tryst has several issues. The most glaring is the fact that Claire says “no” several times as Noah probes her body. She gives in. The next morning, she’s quick to take responsibility for basically being assaulted, telling Noah that she’s the adult and should’ve known better. But Noah’s an adult, too. The script doesn’t state his age as 19; he’s “almost 20” though he’s still a senior in high school – he had to take time off after a family tragedy. Guzman himself is 27 and doesn’t look too much (if at all) younger than the stunning 45-year-old Lopez. This isn’t some naïve kid being taken advantage of or getting mixed up in the head after having a pubescent fantasy become reality. He’s an aggressive predator with psychoses that go unexplained in Barbara Curry’s horrendous screenplay.

The movie plows through the obvious confrontational elements with absolutely no connective tissue other than obvious foreshadowing. All any scene does is just enough to set up some other hackneyed event that happens next. Noah causally manipulates Kevin into having abandonment issues, and in the next scene the typically mild-mannered Kevin angrily lashes out at his parents over dinner. Not all of the foretelling pays off, though. Noah is established as a crack shot with a pistol (again unexplained), only to miss an easy kill shot during an obligatory climax where Claire and her loved ones are put in grave danger.

Suspense isn’t ratcheted up to this ridiculous end, and nonsensical chaos is sloppily thrown into our faces by director Rob Cohen. Kevin’s bullies are introduced in the opening scenes and then forgotten until Noah needs something crazy to do. He beats a kid nearly to death in the school hallway and then tosses aside the assistant principal, and Claire’s best friend, Vicky (Kristen Chenoweth in a thankless role). Vicky doesn’t call the cops, or even school security officers or other staff. She takes Noah into her office to tell him that she discovered he got kicked out of his last school. That’s it. This is the level of craft and nuance that exists throughout the movie.

There’s computer hacking (unexplained), evidence conveniently left on a laptop (complete with blunt file folder names), voice message manipulation, and surreptitious videotaping. A cat falls from the sky for a false scare. A car’s brake lines are cut, maybe so Cohen can film a flashy Dodge Challenger speeding down a twisty road and reminisce about his glory days directing The Fast and the Furious.

It is not thrilling or tantalizing, and despite the existence of a few unintentional laughs, The Boy Next Door is so terrible and so irresponsible that it can’t even be enjoyed as absurd trash. It’s just a plain old pile of rubbish.