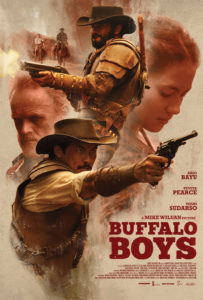 Look, it’s no secret that first-time director Mike Wiluan has an affinity for Westerns. In his dual writing/directing debut feature, Buffalo Boys, we see a character walk into a bar through wooden saloon doors; we see men in cowboy hats; we see pistols, sand and spurs; we see bad men ruling a defenseless town with an iron fist, we see shoot-outs…then we see more shoot-outs; and we see our heroes ride into the final battle on blazing stallions, their most trusted steeds. Alright, maybe not that last part exactly. But you get the idea. Did I mention shoot-outs?

We begin in the arid abyss of the American Frontier, California circa 1860, on a train, which is where we meet Indonesian brothers Suwo and Jamar. The pair seem to specialize in the business of railroad car brawling, as the tone is immediately set mere minutes into the film with a break-neck fight sequence between older brother Jamar pitted in the archetypal David-versus-Goliath scenario against some unnamed mammoth of a man whose height and muscle-size border on the supernatural.

The precedent is established early on that, not only is the action the first priority of the filmmakers — here the hand-to-hand combat sequences are executed with a deft precision uncommon to most American-made Westerns — but, furthermore, the film has no intention of avoiding the slew of tropes that are signature to the genre, placing that much more pressure square on the pure entertainment value of its ability to excite through action. And it does, for the most part. 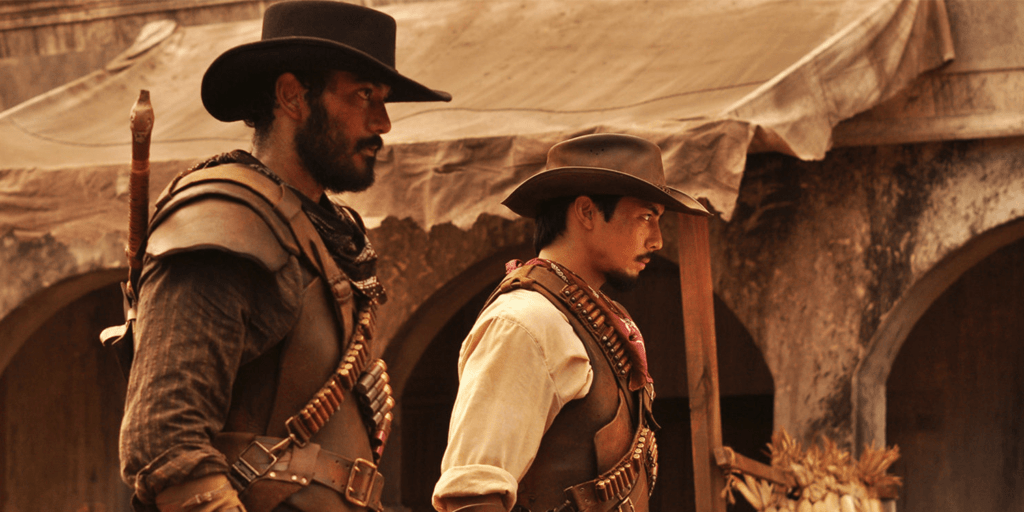 Soon we come to understand the royal family lineage of the brothers through the verbal recounting of their uncle, Arana, and how they are ready now — each having mastered the subtle art of becoming a cowboy of the American Wild West — and must make the long-awaited return to their rustic homeland of Java to seek bloody revenge and retribution for the murder of their sultan father, killed at the hands of the cartoonishly evil Dutch Captain Van Trach.

Along the way we are treated to our fair share of frenetic skirmishes between the brothers and the various obstructions in their path to justice, all of which involving some degree of inspired choreography, snappy editing, satisfying gore and creative kills. 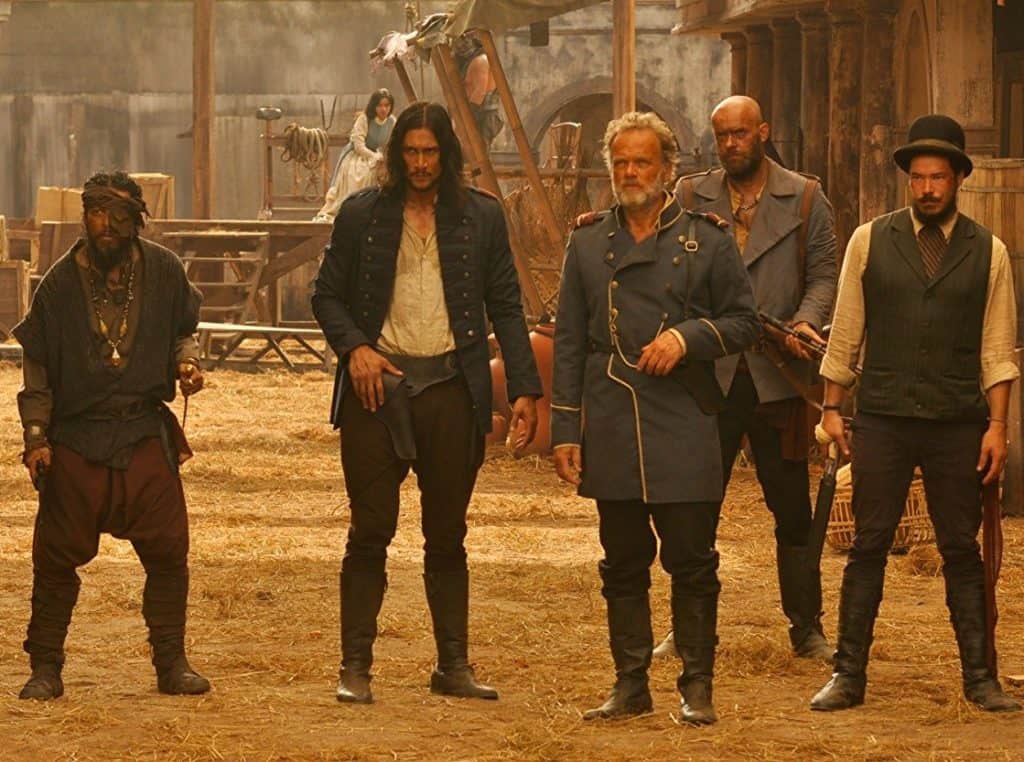 The iconography of Indonesia is fully realized along the journey, painted with robust hues of dirty umber and raw sienna and inhabited by a living, breathing lifeforce that imbues the film with a rich and tangible cultural presence, one that is dissimilar to the sparse lifelessness of Westerns to which we might be accustomed. Especially once introduced to the reverberation of pain caused by the villainous parasites infecting the town, the people’s anguish is highlighted quite viscerally. It’s a shame that the film fails to establish a context and believable backbone to the causality of all the suffering, with the bad guys harboring the blame for most of its major problems.

Even though it admittedly sells the ominous tone of the presence of evil-doers effectively through the gleeful cackling of the disheveled henchmen or the blank stares of the native children forced into slavery, Buffalo Boys’ greatest downfall is its one-dimensional, cookie-cutter villain, Van Trach, of whom the script foolishly renders as a nondescript bad guy that does bad things for bad reasons. You see, brutality for brutality’s sake a good villain simply does not make. 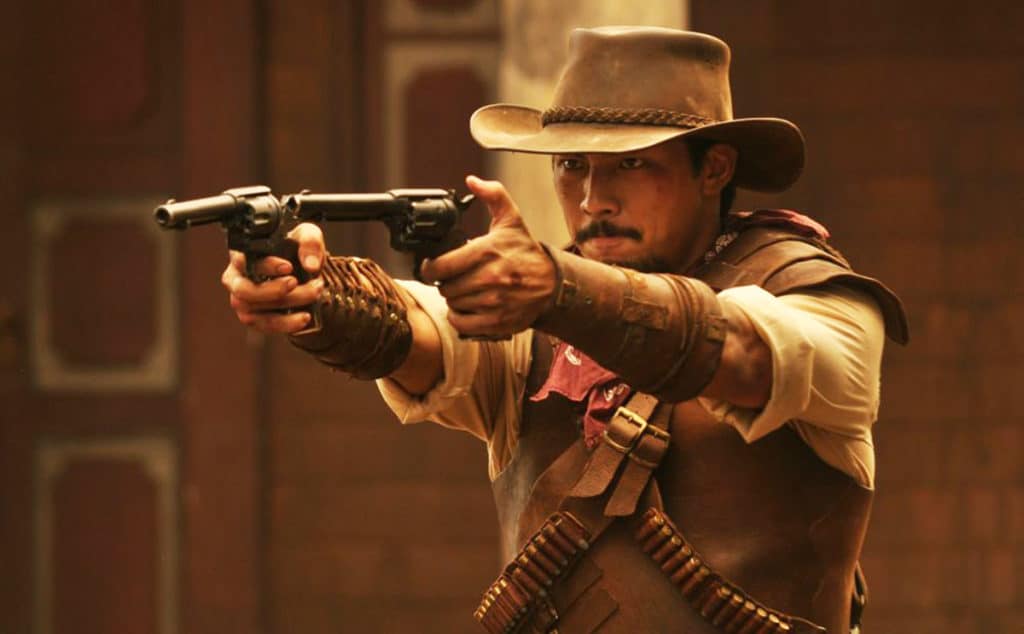 Too often do we see Van Trach commit monstrous atrocities for no good reason, stripping away any depth or believability in his character or the repercussions of his actions. Furthermore, perhaps the greatest tragedy of this lack of character development is the collateral damage it inflicts upon the audience’s ability to empathise with the suffering of the civilians.

Buffalo Boys wraps up as fast as it starts, finally arriving at what it’s been itching to get to the whole runtime: the self-indulgent, macho — but nonetheless engaging and frenetic — gorefest of a finale. The film resolves with character arcs either left unfinished or hastily rounded out, and before we know it, we’re being frantically chased into the sunset by the end credits.

But for what it sets out to achieve, Wiluan’s transplanted Spaghetti western claims its cheap bounty, delivering on its promise of a baseline entertainment with its action spectacle, buoyant humor and competent performances — as long as you can stomach a film so trite and brutally marred by genre cliches that it defies any hope for individuality or merit for its independence.