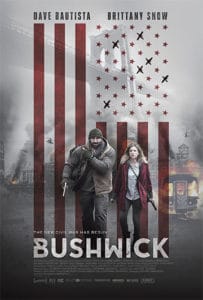 In 1984, during the heat of the Cold War, a little film called Red Dawn was released, exploring a what-if scenario: the USSR invading the U.S. mainland. Fast forward more than three decades later and, while foreign enemies are still a hot-button issue, it’s the growing divide between our own citizens that seems to be a greater threat to our safety.

Cary Murnion and Jonathan Milott take this idea and propose their own “what if” with the gritty actioner Bushwick. The film opens with Lucy (Brittany Snow) and her boyfriend Jose (Arturo Castro) exiting a subway car in Brooklyn to find the platform mysteriously deserted. Upon making their way to the exit, they emerge from the underground to find all hell has broken loose on the streets, with gunfire, rockets and death raining down upon them. 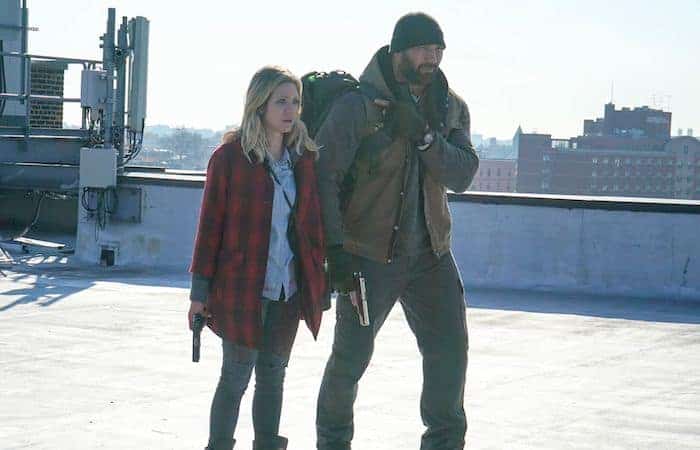 Lucy barely escapes with her life and seeks refuge in a house inhabited by a survivalist janitor named Stupe (Dave Bautista) who agrees to escort her to her grandmother’s apartment a few blocks away. As the duo traverse the now war-torn streets of Bushwick, they must contend with not only the enemy soldiers, but also the opportunistic thugs taking advantage of the chaos and whose criminalistic behavior goes unchecked.

Presented in real time, using a faux single-take method, Bushwick keeps the action running at a steady clip, allowing us only the occasional reprieve from the violence, which seems to find our protagonists at every possible moment. While this refusal to cut between scenes may be easily considered a gimmick, it lends itself to some incredibly tense moments while keeping the audience engaged with its kinetic movement and fantastic camerawork. It is truly a great, and no doubt challenging, choice, and it happens to be the film’s most endearing quality despite my inner critic mentally taking note each time I spotted a masked cut.

It’s an unrelenting film that pulls no punches when it comes to the horror of war, making all the brutality feel more exacerbated, knowing that it’s taking place on our front porch. For the first 30 minutes or so, we don’t even know who these people are or what’s really going on, and after it’s revealed that we’ve entered American Civil War Part II, there’s still only a loose explanation as to why this is happening. 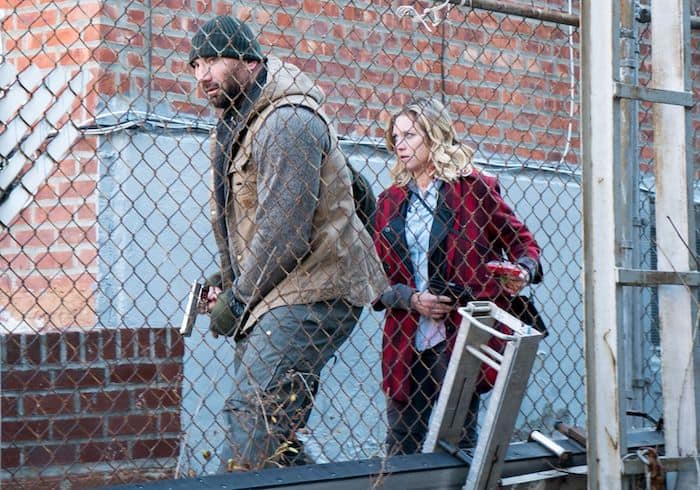 It was around this shoddily crafted scene of exposition that I realized Bushwick isn’t so much a well developed, politically driven, cautionary tale but instead more of a bombastic B-movie that, like so many before it, contains some thinly veiled messages that carry more relevance now than the filmmakers probably expected.

In the film, Texas and the other states in rebellion decide to target Bushwick because of its racial diversity, believing that to be a weak point, only to realize they made a huge strategic error when New Yorkers band together to take back their city from these invaders. Yes, it’s kind of silly, but I had an absolute blast.

Accentuated by a fantastic score from Aesop Rock, Bushwick is an energetic, unflinching look at war on the homefront with some great cinematography and an unforgettable climax. Go into it with the proper expectations, and you’ll come out of it wanting a re-watch as soon as possible.