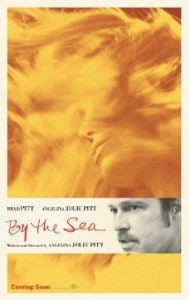 Shortly after a struggling writer and his wife arrive in a picturesque French seaside resort he observes, “Anyone could find a story here.” Though By the Sea pretends he does in the end, he does not. Neither does writer/director/star Angelina Jolie Pitt. Her shiny vanity project wallows in contrivance and mistakes its dullness for profundity. At least the scenery is pretty.

The writer, Roland (Brad Pitt), and his wife Vanessa (Jolie Pitt) of 14 years are clearly miserable, though no reason is immediately given for their despair. Roland spends his time boozing and chatting up the barkeep (Niels Arestrup) – anything to avoid writing, while she holes up in their hotel suite staring wistfully into the distance, sometimes with a single tear on her cheek. With the Mediterranean in the background and the perfectly constructed 1970s French-ness of the coastal retreat, it all feels like the longest Dior commercial ever.

Some vibrancy is injected into the equation when honeymooning newlyweds (Mélanie Laurent and Melvil Poupaud) shack up in the room next door. Vanessa discovers a peephole between the rooms and commences spying on the sexcapades of the young lovers, with Roland eventually getting in on the voyeurism.

The relationship comparison and yearning is clear without it having to be spelled out laboriously in scene after scene, though Jolie Pitt the writer/director feels the need to. The contrasting of fresh and stale love reaches a minor zenith on an amusing note when Vanessa and Roland have a little picnic on the floor to enjoy the show next door. However, the layers never get peeled back and the episodes remain painfully trite. It’s as if the objective was to merge Eyes Wide Shut with Rear Window and remove any of the intrigue that makes those films great.  It’s not long before we’re wishing something – a weird orgy, a murder, or anything at all, happens. 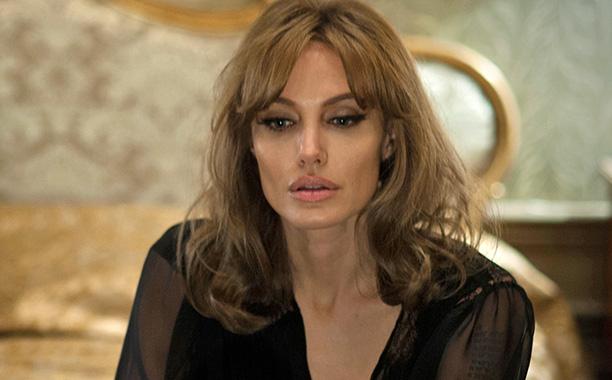 Depth is seriously lacking as interactions between the weary couple remain a series of stilted micro-conversations that always stop just short of providing any real insight into their woes. It’s hard to know if his drunkenness and her near-comatose depressive state caused their troubles, or vice versa. When the big reveal finally comes, it’s a matter-of-fact whimper. No doubt it could be a serious relationship issue, but the reaction it stirs is more, “That’s it?” than, “Oh, it all makes sense now.” It doesn’t.

Performances are perfectly adequate with the leads hitting their single notes. While beautiful, the lack of nuance extends to the setting, its inhabitants, and even their ‘70s wardrobes. Vanessa often hides behind a large pair of designer sunglasses. There are at least four shots of either her or Roland straightening these glasses on a dresser or table and setting them upright, as if in a desperate attempt to restore even the slightest bit of order to this relationship in disarray. Subtle.

And you won’t believe the weight given to a silly metaphor involving the lone fisherman who oars into the sea every day and comes back emptyhanded. Though, after two-plus hours of wading in the shallowness of By the Sea, we can kind of relate.