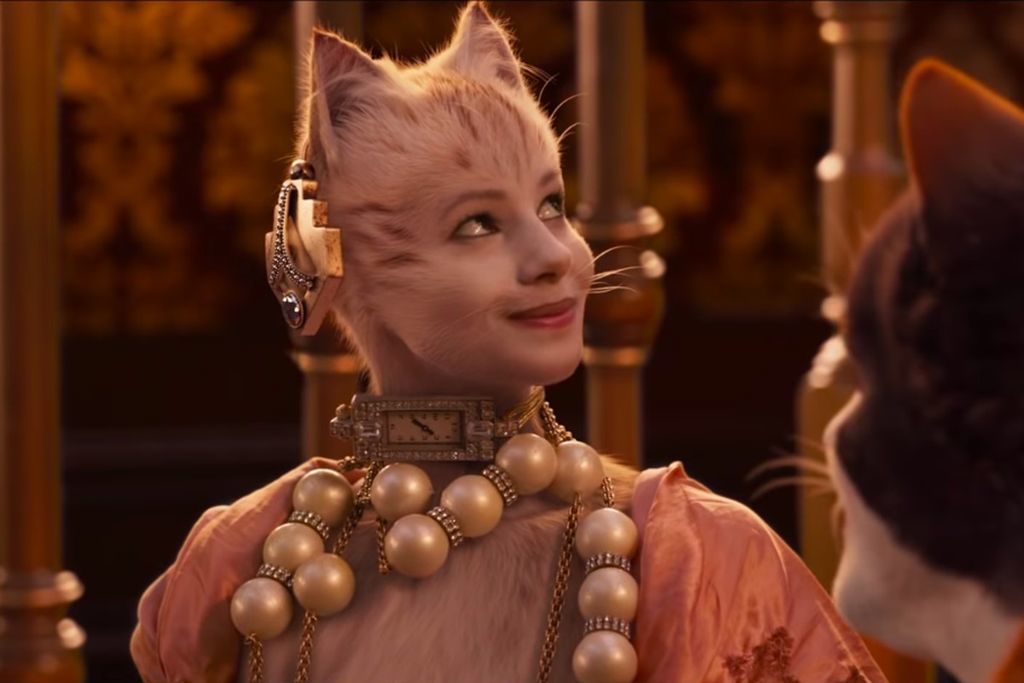 Why does this big-screen adaptation of Andrew Lloyd Webber’s “Cats” exist? The implausibly successful and culturally ridiculed musical about a clan of London alley cats with ludicrously asinine names who engage in a flamboyant form of religious tribalism made its way to the cinema by way of noted Oscar-baiter Tom Hooper, and the writing was on the wall from the first trailer.

In that viral sensation, which now feels like a shared fever dream for a film that could not—  should not — exist, the slender-bodied computer fursuits with human faces hastily stitched on cavorting about in the bafflingly scaled streets of neon London marked this as a failure from the onset. The more you saw of Cats, the more screenshots, set photos and trailers that were released, you couldn’t help but wonder where were the sensible producers in charge at Universal Pictures who would take one look at this trainwreck in waiting and sensibly pump the breaks, cut the company’s losses and scrub that trailer as best they could from the internet.

Yet, with the proven musical-adapter in Hooper and cast of notable (yet uncomfortably unrecognizable) performers throwing themselves behind this dumpster fire of inanity, they decided to sit back, and just let it burn…and I have never been more grateful for the bizarre ineptitude of studio executives. Cats is an admirably spectacular failure, where so many poor, inscrutable decisions were made on all fronts that the film practically transcends sensible quality judgements. 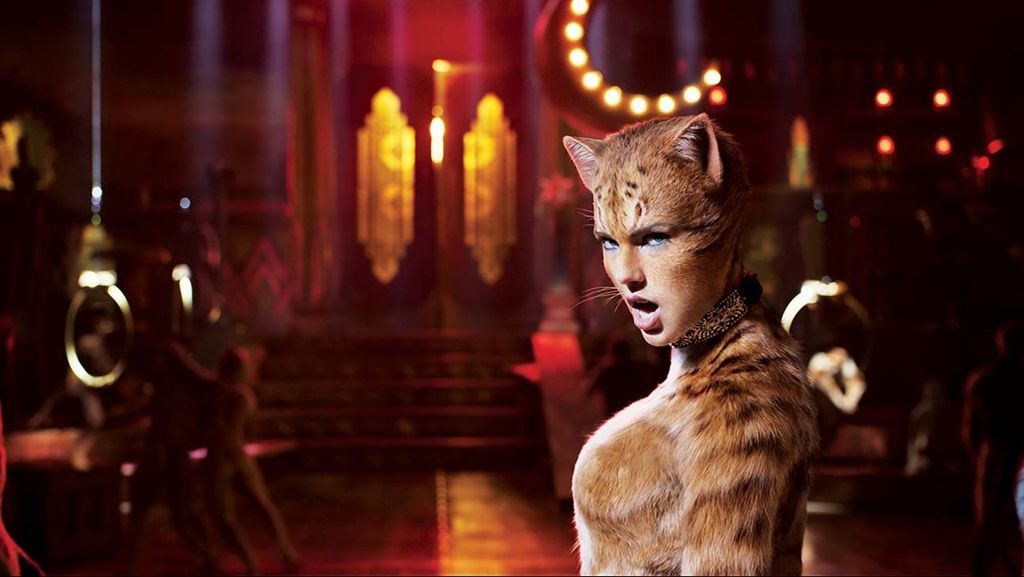 It’s an unapologetic exhibition of weirdness that refuses to release the maddening stranglehold that its paws have on your psyche. I was left confused, bewildered, repulsed, but, ultimately, grateful for the experience. To be stirred into this state of disbelief, when the tentpole blockbuster for the past decade has been predominantly bland, safe crowd-pleasers that numb more than they provoke, I have no choice but to admire it.

Cats leaves Webber’s musical virtually unchanged (aside from the uncanny valley CGI, of course) and screenwriters Hooper and Lee Hall make no effort to translate any of the fatuous plot into something recognizable. Much of the film takes a “cinema of attractions” approach by playing musical number after musical number at a nauseating succession, introducing pointless cat characters for their one song so they can dance poorly choreographed scenes in a disturbingly weightless fashion, due to the VFX robbing everything of presence.

There are cats of all kinds who compete through song and dance (I think) to be the “jellicle choice” and ascend into the “heavenside layer” and be reincarnated, which can be willed by the wizened matriarch of the cats. Even though this is all dismally communicated through the script’s refusal to explain and the songs just digressing away from any form of narrative, what does manage to come across is trite nonsense stemming from Webber’s original musical. 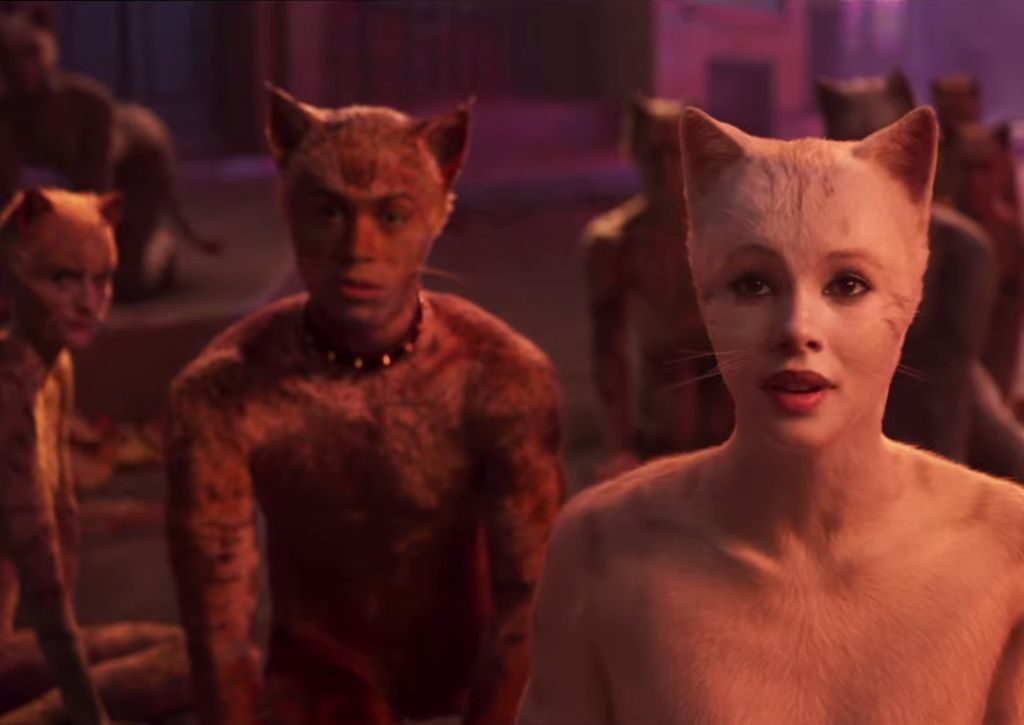 Cats places all its stock in spectacle, and, hilariously, the spectacle is bland and uninteresting. Outside of the horror-show look of the cast, the song-and-dance numbers are rudimentary; the CGI makes everything look flaccid and unmistakably synthetic; the cast struggles to emote under their computer fur; and everything just moves so glacially slow. The songs may be the one thing Cats does unquestionably right, but they are so hard to appreciate when you have to look at the nightmare fuel that is attempting to belt them out.

Despite all this, and this physically hurts me to type, I had an amazing time with Cats. As high-camp-theater experiences go, there are few as memorable or enjoyable than what Hooper inadvertently produced here. Though it pushed me into a heightened state of awareness, where I was laughing uncontrollably as a tactic to maintain my sanity, I was enraptured with the experience of watching and could not look away no matter how many times I tried.

In a theater with other like-minded individuals as blissfully unaware as you are, you sit stunned by what is unfolding before your eyes. I am not a known proponent of the phrase “so bad it’s good” but can see how useful such a descriptor becomes when faced with something as baffling and earnest as Cats.

A messterpiece of cosmic proportions. A dumpster inferno uncomparable to other disaster blockbusters. Cats is a special kind of something whose value as art defies assumptions of quality. The score on this review is more of a formality because I honestly don’t know how to judge this monstrosity. All I can say confidently is that I recommend everyone see this as soon as possible because it is truly something that needs to be seen to be believed.