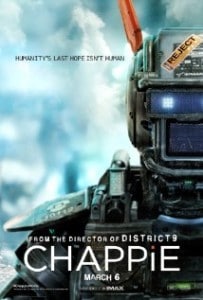 Neill Blomkamp was labeled by some as sci-fi’s next great visionary after 2009’s District 9. In his inspired debut, the filmmaker married metaphor with bloody mayhem and original special effects that perfectly communicated his vision of a lived-in, near-future dystopia. His anticipated sophomore feature Elysium was more of the same, only plagued with narrative bloat and a focus on spectacle, getting lost in the thicket of allegorical action.

Recognizable tropes are further diluted in Chappie, a stale retread of familiar themes and visual sheen that stands out only because of a scattershot story and the misguided decision to cast South African counterculture rappers in huge roles.

In (another) very near future, Johannesburg officials deploy a robotic police force to combat the crime epidemic. Created by brilliant engineer Deon (Dev Patel), the mechanical scouts are winning the battle and render the huge tank-like machine dubbed “The Moose,” designed by former solider Vincent (Hugh Jackman), unnecessary. Deon’s more interested in artificial intelligence than defense contracts, and when his boss (Sigourney Weaver) shoots down his ideas for a thinking machine, he uploads the software into a damaged police drone.

Through a clunky series of ridiculous events, the sentient robot winds up in control of gangster-types Ninja and Yolandi (Ninja and Yo-Landi Visser of rap group Die Antwoord). The couple hopes to train their new toy, which they name Chappie (Sharlto Copley), to help them pull off a heist and pay their underworld debts. Meanwhile, Deon tries to maintain a level of supervision over his creation while Vincent searches for an opportunity to put his remotely-controlled Moose into action.

While barreling through all of the ridiculous plot developments, Chappie never settles on a metaphorical through-line. Blomkamp assembles spare parts from other movies, bits of incongruent social commentary, and stock observations of the human condition – boiled down to the idea of consciousness – into a cumbersome bore. Predictably, attempting to graft RoboCop onto A.I. doesn’t work. 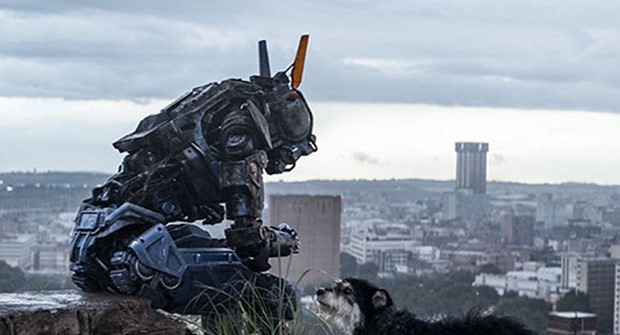 The most promising idea is Chappie becoming a product of his chaotic environment, with Ninja and Yolandi instilling dubious morals. Like everything else in the movie though, the nurture over nature argument is shallow and manipulated to work only at a micro level. It’s all as plain as the “Reject” sticker affixed to Chappie’s metallic head.

Characters wander into and out of the story solely to communicate Blomkamp’s whim of the moment, changing their ethics and actions as needed. For instance, one moment Yolandi is ready to murder someone in cold blood and the next she’s immediately disarmed by Chappie and her motherly instincts kick in. Ninja takes on the cruel, bad influence stepfather role and has an unconvincing third act turn. Are we really supposed to identify with or care about these despicable people? The rappers have the alternative look and lifestyle that fit some of Blomkamp’s sensibilities, essentially playing grossly exaggerated versions of themselves, but their acting is more lifeless than that of their VFX co-star. Chappie is a wonderfully realized mo-cap creation, but he’s given no real arc other than gaining super-intelligence and some archetypal angst. Why Copley’s voice always remains that of an adolescent rube, even when unlocking keys to human existence, I have no idea.

Multitude superficial provocations are ultimately dropped for the inevitable third act showdown that contains well-staged and beautifully shot action that is also completely empty and devoid of excitement. After the hail of gunfire, Blomkamp has nowhere to take the story, settling on a spectacularly stupid ending that feels like a gag.

Throughout Chappie, big ideas are presented in rapid succession and grand questions are asked, but the movie has no insight. Even calling it a pretty mess is higher praise than it deserves. On the heels of District 9 and Elysium, Chappie feels like a dull, graying copy of a copy.