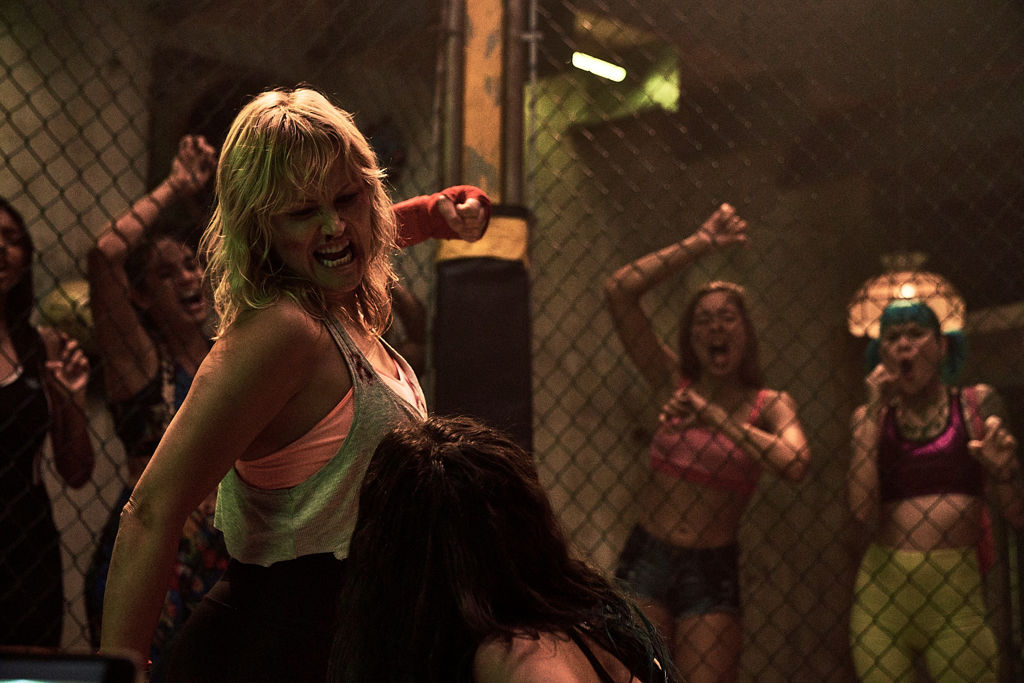 Paul Leyden’s Chick Fight centers on an underground MMA fighting club wherein pressed-upon women who have been “trained by society to cry out their problems” can embrace their inner Amazonian and work it out on another woman’s face in the ring. The club is discovered by the spiralling Anna Wyncomb (Malin Akerman), who is single, jobless and in dire financial straits, as a solution to finally seize control of her crisis of a life.

The idea is positioned as a therapeutic release for women like her who think the world is dealing them one too many blows and the best solution is learn how to take the barrage of punches and learn to fight back in this one, contained environment they have control over. That’s all well and good, but in Chick Fight the concept and its relation to the hapless protagonist are so underexplored and disconnected from one another that I am not exactly sure what (if anything) this backroom feminist pit fighting actually did for her.

After being introduced to the fight club by her police friend Charleen (Dulce Sloan, who feels like the only cast member with a firm handle on the comedy) and then learning her late mother was somehow the founder and former champion of this fight club, Anna throws herself into the idea with abandon. Beyond the tenuous maternal motivations and lip service paid to a “aren’t you tired of being nice, don’t you just want to go ape shit” kind of feminine empowerment, the reason why she is so ready to put her tailspinning life on hold to become an illegal pit fighter never materializes.

As she trains with her washed-up coach archetype (a surprisingly game Alec Baldwin) and repeatedly gets pulverized in the cage, Chick Fight never feels like it is building toward a payoff for these efforts. While being narratively loose is its biggest sin, the film fails to even deliver on humor, as the majority of screenwriter Joseph Downey’s jokes are clunky, awkward and handled stiffly by the cast (outside of the comedians among them).

The film putters around with training montages and half-formed inspirational messages about “beating the shit out of life in the ring” for the majority of its runtime and lacks a sense of direction for Anna’s growing absorption into the world of backroom melees. She’s given a rival in the present champion of the club Olivia (a tired and uninterested Bella Thorne), and this setup feels even more slapdash than Anna’s involvement in the fight club

We are told in a dropped line that Olivia wants to take over the club with professional fighters (I think?), that she doesn’t believe in the therapeutic value of choking out another person and only wants to hurt others. Much like most plot points in this film, it is never followed up on, and their rivalry feels forced, rushed and arbitrary.

Where Leyden allocated much of his interest is making the brief but numerous fights in his film “look cool.” Brushing the dust off that editing trick of slow motion and sped-up footage changing back and forth on each landed punch, Leyden’s treats all fight scenes like moments in a highlight reel rather than a way to build his story.

Placing style on a pedestal as he does with his pushed-in camera, hyperactive edits and overused slowmo, it makes all his fight scenes illegible, suffocating and noticeably confined to montages that emphasize the brutality (and undercuts the supposed therapy of the premise). Between the mentioned “mind-blowing” knockout spits, calling anything in this film a “fight scene” is being generous due to their brevity and muddled presentation.

The anticipation of an unsatisfying ending for Anna’s non-journey is delivered as Chick Fight pulls a final, half-hour quick fix for all the plot points in the film. Rushing to a convenient conclusion, Chick Fight nearly forgets its supposed premise and feminist leanings and leaves much of that talk to the wayside.

A shallow veneer of empowerment and some fight scenes trying way too hard to convince you they are cool is all the film really has to offer. At least the similarly premised Fight Club took the time to explore its interrogation of masculinity and make a theme out of it.