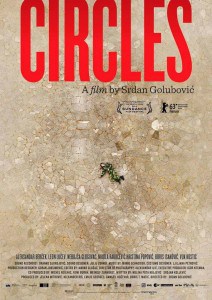 Screening on Friday, May 2nd at the Tribeca Cinemas in NYC as a part of the Bosnian-Herzegovinian Film Festival.

Critically acclaimed Serbian director, Srdan Golubovic, newest cinematic offering Circles happens to be inspired by true events occurring during the Bosnian War in 1993, wherein a Serbian soldier named Marko (Vuk Kostic) courageously intervenes when three of his fellow soldiers brutalize a Muslim civilian, Haris (Leon Lucev), in the middle of the town square. This singular heroic act of sacrifice saves the life of one man, however, tragically the brutality of the three soldiers shifts focus onto one of their own, and the damage done creates a ripple effect in the lives of those involved.

The film’s tragic opening stops short of the showing the viewer how the harrowing event ultimately reaches its ruthless end, quickly skipping ahead 12 years in the future. The specifics of Marko’s fate remain unclear; however, the most important detail of that day quickly becomes apparent…Marko died that day and Haris did not. The genesis of this fateful day started with one, seemingly inconsequential mistake, that is forgetting one’s pack of cigarettes when leaving the house. The resulting actions within Circles are a series of interactions between the perpetrators and the people closest to the victim and how they’ve been affected by the events of that day, forcing them to confront the past, coming to grips with their individual emotions.

The film plays out in three separate storylines, the first of which involves the benefactor of Marko’s heroics – Haris, the Muslim shopowner now residing in Germany, happily married with two daughters. We are introduced to Haris as he comes to the aid of Marko’s fiancee, Nada (Hristina Popovic), and her son Dusan as she seems to be desperately fleeing her abusive, controlling husband. What transpires is Haris, driven by a sense of duty to forever repay an unpayable debt to the man that saved his life 12 years ago by providing shelter, care and employment to a woman whose seemingly perfect life was shattered. When the abusive spouse shows up looking for his son, Haris is compelled to protect mother and child at all cost.

The second involves Marko’s physician friend, Nebojsa (Nebojsa Glogovac), who was with Marko in the square, standing idly by, occasionally shouting out for mercy. Faced with the past through the arrival of an emergency room patient via car crash who happens to have been the main perpetrator, Todor (Boris Isakovic), of that brutal occurrence, Nebojsa must face his demons, wrecked with guilt stemming from his role of idle onlooker he rummages through Todor’s conscience looking for an ounce of repentance or culpability in the man’s heart. Screenwriters Melina Pota and Srdjan Koljevic continue to stack the coincidence deck by having Nebojsa torn between helping the man he loathes with the inclusion of Todor needing a life-saving operation and, of course, Nebojsa happens to be the best surgeon in this field. However, this storyline is handled rather admirably with restraint resulting in one of the film’s more powerful, emotionally-charged scenes with Todor, panic stricken seconds before being administered anesthesia. Even though the scene is devoid of dialogue a bevy of emotions and internal conflicts are deftly
communicated through this rather small exchange.

Continuing the exercise in coincidence cinema, the third storyline involves the son of one of the perpetrators, Bogdan (Nikola Rakocevic), persistent in his pursuit to gain employment from Marko’s father, Ranko (Aleksandar Bercek), currently rebuilding a church stone-by-stone seemingly in the middle of nowhere. Within the duration of this particular storyline is where the coincidence seem to pile up, unnecessarily so, almost to the point of heavy-handedness, playing out in stereotypical fashion with Bogdan slowly winning over Ranko.

Although Golubovic’s Circles is by no means revolutionary in its execution, the film does an adequate job of handling the emotionally heavy aftermath with fair amount of restraint and grace, even considering some of the film’s overbearing sequences. The cinematography from Aleksandar Ilic is a mixture of hand-held and static framing imbuing the scenes with a small intimacy giving the feeling that this exercise of emotional dissection comes with a bit of apprehension. The ending features an inspired choice, having the camera focus on the idle, reticent bystanders gaze upon the brutality inflicted upon one of their own, at the hands of their own.