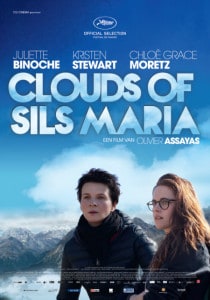 From the surrounding mountaintops overlooking the valley of Sils-Maria one can witness the clouds pour into the basin, snaking their way through the area completely enveloping the town in a shroud of low-lying cloud cover, hermetically sealing off the outside world with the help of its earth-pile perimeter. One’s perception of this natural phenomenon heavily depends on where one finds themself when the “Majosa Snake” glides its way into the vale. From the underneath the clouds one could feel trapped between the clouds, mountains and lakes while above it all, from a distance, one is privy to enlightened vantage point of sorts.

Which is exactly where veteran actress Maria Enders (Juliette Binoche) currently finds herself in Olivier Assayas’s Clouds of Sils Maria, figuratively and literally above the clouds at the height of her international career. 20 years ago, Maria found fame through her breakout role as Sigrid, a beguiling young woman that drives her boss to suicide, in Wilhelm Melchior’s play Majosa Snake. And now, while on her way to accept an award on his behalf she learns of his suicide which propels her back into the past; back into another adaptation of the play albeit from a new viewpoint – that of the boss, Helena.

Enders and her personal assistant, Valentine (Kristen Stewart), laboriously run lines throughout the day while occasionally breaking to exchange their personal perspectives regarding Sigrid and Helena’s motivations and mind states; or, spend their time drinking tumblers of spirits discussing Maria’s soon-to-be co-star, Jo-Ann Ellis (Chloë Grace Moretz) – her erratic behavior along with her newest blockbuster superhero film. It is as though Binoche and Stewart have been working together for years as the harmonic interactions displayed within Clouds of Sils Maria appear utterly natural and genuine; acting and reacting superbly with one another while seamlessly maneuvering through the terrain of shifting personas and perceptions. 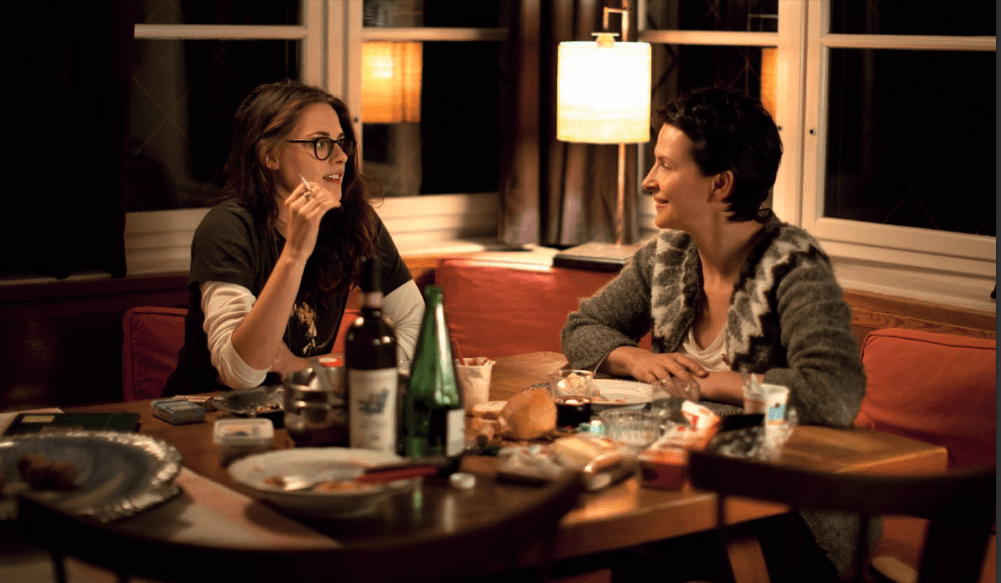 All of the film’s exuberance and energy resides within these sequences as the organic chemistry between Binoche and Stewart shines throughout, routinely providing a much-needed air of levity to the solemnity of the script’s constant dissection of character motivation. The carefree, lighthearted moments between Binoche and Stewart are captivating, unfortunately these moments are nestled deep within a procession of contemplative assessments that ultimately lack any substantial insight, becoming less illuminating with each reiteration.

Fortunately for the viewer, however, the backdrop to all of the double- and triple-duty dialogue dictation happens to be the aforementioned Sils-Maria region of the Swiss Alps. So, even when the exchanges between Binoche and Stewart become a bit tiresome and tedious in their repetition of futility, the viewer is at least treated to the breathtaking scenery of the Swiss countryside from up high. Although, despite the view from the mountaintops, Clouds of Sils Maria inexplicably lacks depth or insight encased in the rarefied air of hollow examination.