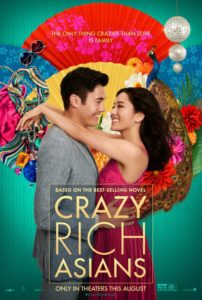 As a collective viewership, we don’t have many emotions at stake in the plot developments of Crazy Rich Asians – as in, we never doubt the outcome of the story and the optimistic notes on which it will end. But this movie has perfected each beat to a science, and does so in a package that’s fizzy and colorful. It’s been 25 years since a major Hollywood studio has produced a film with an entirely Asian main cast, and though this moment has been absurdly delayed, it’s hard to imagine it being any more openly enthusiastic, and so strangely engrossing in its versatile use of familiar devices. It’s refreshing to see a demographic that’s been so underrepresented in American pop culture be given such a robustly mounted romantic comedy; one that that’s zany yet warm, perceptive yet humanistic, excessive yet thoughtful.

It’s all there in Constance Wu’s lead performance.  Her character, Rachel, a first generation Chinese-American. Many first generation immigrants discuss being regarded with with a sense of otherness, with everyone considering them a little bit foreign, no matter the situation. For Rachel, it takes on a new and magnified form when she travels to Singapore to attend a wedding within the family of her boyfriend, Nick Young (Henry Golding). The Youngs, as it transpires, are a super-wealthy (one might even say crazy rich) real estate family. Their name commands such instantaneous status and power that when Rachel tells her college friend Peik Lin (Awkwafina) – herself of extremely affluent means – that she’s dating a Young, Peik Lin offers to accompany her to a pre-wedding soirée just for an opportunity to be in the family’s general atmosphere. 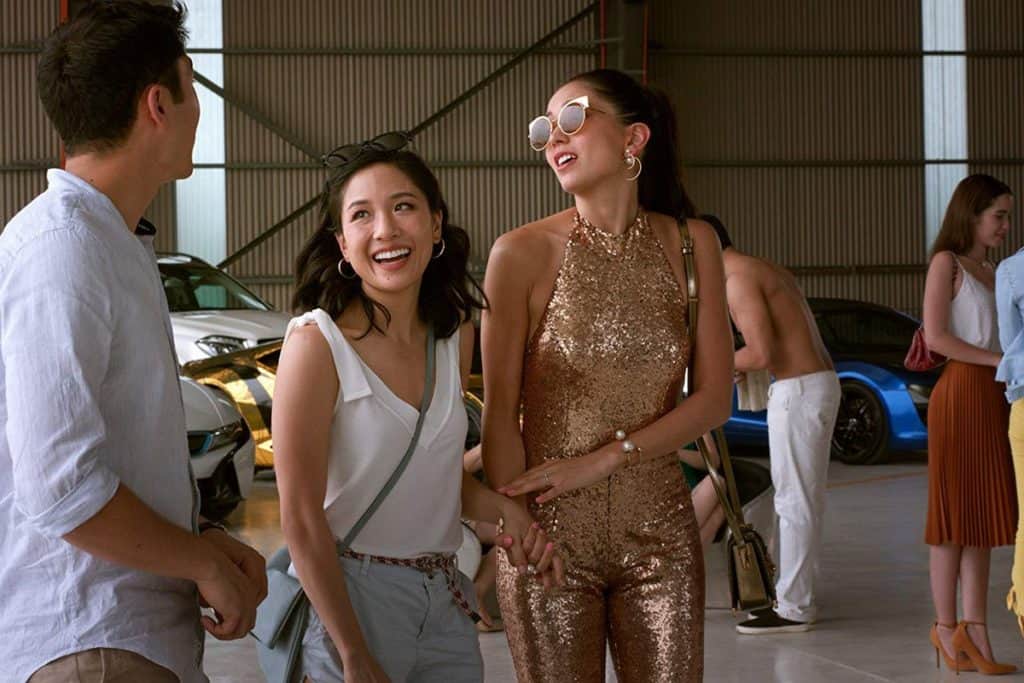 Through a conflation of intense protection of their prestige and the inclinations of longstanding cultural values, Rachel sets of a series of red flags in the Young family and the Singapore’s other high society circles. She desperately tries to gain even a modicum of trust from Nick’s mother, Eleanor (Michelle Yeoh), and attempts in vain to ignore the increasingly obvious scrutiny her very presence has conjured up. Crazy Rich Asians explores the idea of traditions and institutions at large. Expectations come up against new developments and fiercely push back at any individual or situation which goes against the established norm. The Youngs are an old money family, secure in their accomplishments, with centuries of storied history. The days leading up to the wedding are filled with various parties that reaffirm that idea of established dominance. They’re grand functions of extreme cost, glossy settings, and continued attempts to top themselves over and over.

Director Jon M. Chu lets us see each big setpiece in all its opulent glory, and as a purely visual experience, the film is a marvel of production design and jawdropping wealth display. But beneath that primary spectacle, he never forgets who Rachel is as a character. Crazy Rich Asians is an entertaining ride through classic romcom formula, yet there’s much more worth saying on how the film speaks to the broader history of Asians in American movies, and what makes every cultural observation so remarkable. 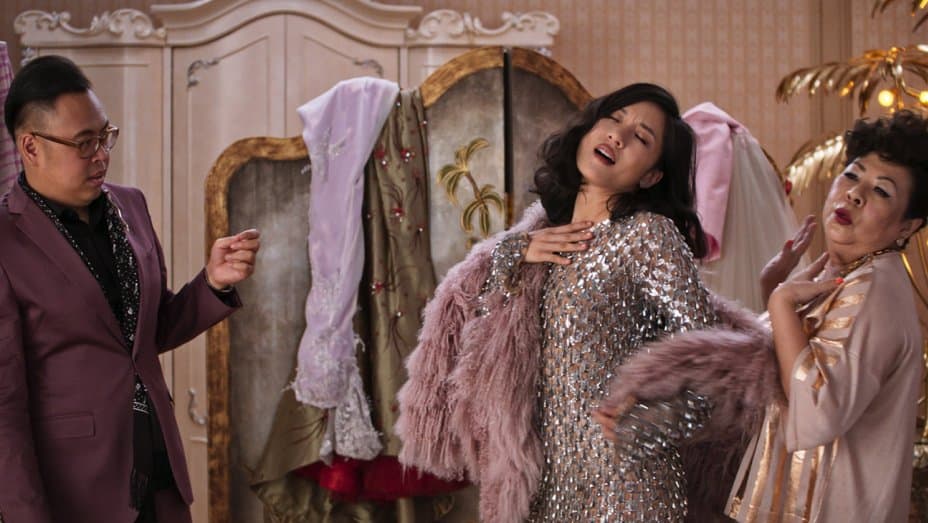 The film uses an Asian American perspective to examine its wider world, and by extension, it’s the basis of how events register in our minds as viewers. The main point of contention between Eleanor and Rachel is that the former sees the latter as a stereotypical American, one self-obsessed and disconnected from her past. However, Rachel ends up engaging with this rigid mindset through her own experiences – a fusion of the American culture she knows firsthand, and aspects of Chinese culture that her own mother (Tan Kheng Hua) instilled in her from birth.

As an Asian American whose heritage isn’t Chinese, and whose connection to his Asian roots is even more distant than Rachel’s is made out to be, I approached Crazy Rich Asians with the foreknowledge that I would view it through a detached lens; less than in other movies, but still a veneer that tilted my angle from Chu’s. However, I realize that this context of foreignness, and the emotions attached to feeling represented in the moment yet underserved as a whole, added to my experience rather than detracting from it. Many insightful essays, written in anticipation of this film’s release, regard the complex idea of being “seen” in a piece of media. And what makes this movie as expressly entertaining as it is comes from the fact that it shares that desire. 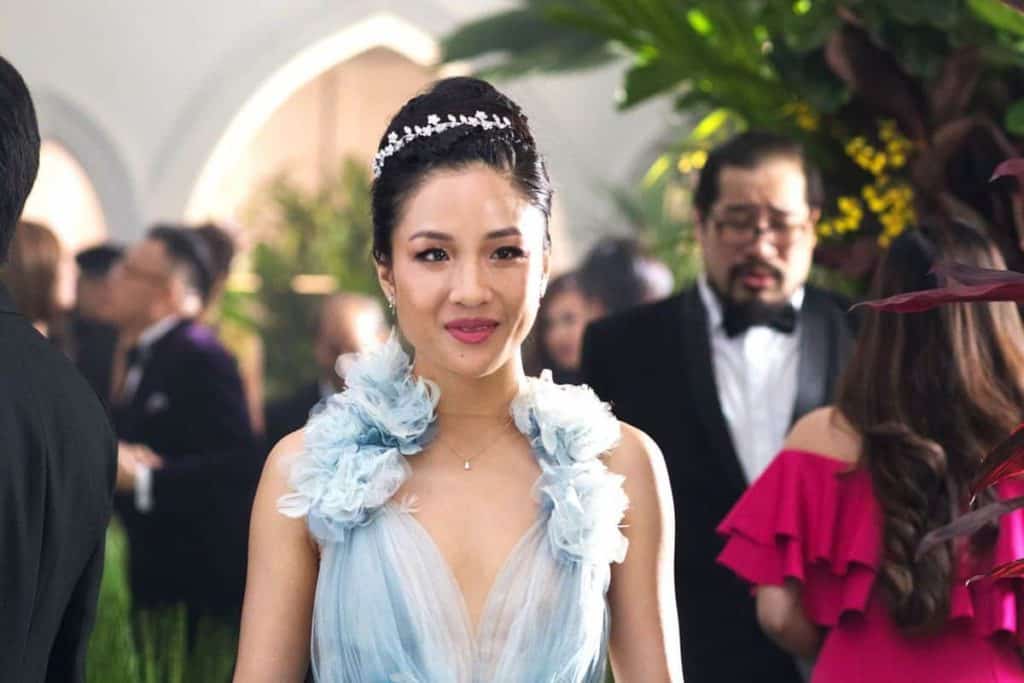 It takes the standard ideas of the romantic comedy, in all its ostensibly universal aspirations, and smoothly streamlines perspectives and worldviews that Hollywood has been all too keen to overlook. The plot is all high fantasy, of course: a little too sugary for its own good,  embracing altruism with its oversized heart loudly beating on its sleeve. Yet in every scene, it’s clear that Chu recognizes the expectations the film, for better or for worse, carries. Better yet, he does so with seeming effortlessness – the kind of breezy awareness of our expectations that romantic comedies of all stripes could take a lesson from. It’s a message revolutionary in its simplicity, performed without an ounce of cynicism or overbearing, perfunctory performance. Crazy Rich Asians is a work of pure intent and wide potential, utilizing Hollywood’s most popular, time-tested devices and razzmatazz with a wise and lovely embrace.