For this Grindhouse Weekly entry, I wanted to pick a Thanksgiving related exploitation flick, so I went with a film from 1976 titled Death Weekend (AKA The House by the Lake).  Although it supposedly takes place over Thanksgiving, there’s barely any mention of it in the film itself, which turns out to be nothing more than a mediocre rape-revenge flick.  Moreover, after watching the film, I come to find that it’s a Canadian production, so my Thanksgiving theme was a bust, just like this movie.

Directed by William Fruet and produced by the now famous Ivan Reitman, Death Weekend plays out nearly exactly like Sam Peckinpah’s Straw Dogs, only not as good.  Brenda Vaccaro stars as Diane, a young model who agrees to go away to the countryside with a wealthy dentist for a weekend of fun and relaxation.  Along the way they encounter some angry rednecks led by Don Stroud, and later become terrorized by said rednecks.  After the dentist is murdered, it’s up to Brenda to take matters into her own hands and get rid of her attackers in the most creatively violent ways possible.

The film isn’t necessarily bad per se, it’s just that this has all been done before- and better.  Straw Dogs is the most obvious comparison, however one can easily draw similarities between this and many other films like I Spit on Your Grave, Last House on the Left, and even Deliverance.  The mid to late seventies was apparently the best time to make movies about rape and monstrous hillbillies. 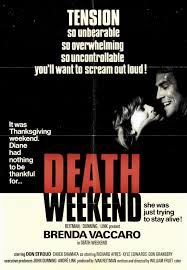 Like all those previously mentioned, the antagonists in Death Weekend are nothing more than inhuman psychopaths that make me wonder how they’ve been able to function in the world up until this point.  Their actions are brutal and sadistic, and each time one of them is offed it’s extremely satisfying.

One of the biggest elements that make this a solid thriller, despite its complete lack of originality, is the performances from the cast, specifically from Brenda Vaccaro and Don Stroud.  Like so many female leads in these types of movies, Vaccaro gets put through the ringer and readily tackles everything thrown at her.

Unfortunately, Death Weekend was not the campy Thanksgiving exploitation flick I had hoped, and ended up being a mediocre and ultimately forgettable thriller.  The performances are good, there’s plenty of gratuitous violence (including someone drowning in a bog), and the bad guys get their comeuppance, but it just doesn’t bring anything new to the table.  You’re better off just watching Straw Dogs (the original) or Deliverance and call it a day.