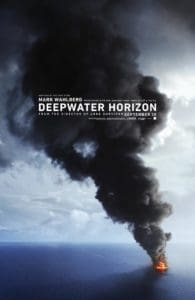 A real life disaster gets a pretty good disaster movie in Deepwater Horizon, an in-the-moment, thrilling recreation of the catastrophic 2010 drilling rig explosion off the coast of Louisiana. There’s corporate greed and blue collar heroism aplenty, but director Peter Berg, with material that’s a fine match for his handheld visual style, keeps the preaching to a minimum. The explosions, on the other hand, are huge, though not cartoonish, and don’t take away from the maddening and sobering facts of the story.

Electrician Mike Williams (Mark Wahlberg) heads out to The Deepwater Horizon, where he’s scheduled to be stationed for three weeks. He and boss Jimmy Harrell (Kurt Russell) are hesitant to drill because of the rig’s faulty setup and discouraging test results. However, BP execs, including Donald Vidrine (John Malkovich), are more concerned about the bottom line and being over a month behind schedule. Against his better judgement, and right after receiving a safety award while flanked by smiling BP reps, Jimmy gives the go-ahead to start drilling.  An uncontrollable blowback destroys the pipe and sets off a series of explosions that spread flames throughout the floating craft.

As with many based on true events movies, explaining all of the particulars gets a little tricky. Deepwater Horizon opens with audio testimony from the real Mike Williams, and we hang on every word as it prepares us for the harrowing drama to come. The screenplay by Matthew Michael Carnahan and Matthew Sand then flounders a bit in the opening act, with a labored breakfast table discussion in which Mike’s precocious daughter explains the drilling process for a school project. The exploding Coke can seems dubious. 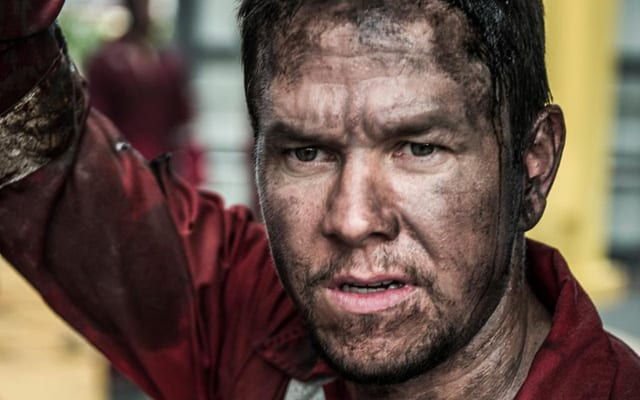 Once on The Deepwater Horizon, there’s more authentic exposition. Mike is the resident genius, knowing everything about everything, but his interactions with Jimmy are natural, as does Russell’s magnificent mustache. The entire cast comes off as credible, with Gina Rodriguez, Ethan Suplee, and Dylan O’Brien sounding and acting like parts of an everyman (and woman) team. Malkovich, and his Cajun accent, stays just this side of over-the-top villain, and is horrific as a willfully ignorant corporate suit (or in this case, button-up shirt emblazoned with the BP logo so we never forget who the real enemy is).

Berg’s perpetually-in-motion camera glides through various parts of the vessel, giving us a good sense of the architecture and the workings of the machinery. At least enough to be concerned when things start going south. Spiking pressure gauges, mud flows, and even discussions about the integrity of underwater concrete pours are filled with innate tension.

We never feel like we’re being spoken to, we’re just given the right information to be properly outraged over how cavalier attitudes and a series of preventable gaffes could lead to the worst environmental disaster in U.S. history. It’s important that the focus always remains on the people behind, and affected by, the doomed planning and not the plans themselves. Even Kate Hudson as Mike’s wife, relegated to the obligatory concerned spouse at home role, is pertinent because her screen time is kept to a minimum and her helplessness is understandable in this circumstance.

Once Deepwater Horizon hits full-on disaster mode, it’s packed with intensity, never pausing for too long in one traumatic situation and almost feeling like a real-time tracking of events. Mike and the crew remain in perpetual motion, stopping only briefly to assist fallen comrades or to brainstorm quick solutions for their multitude of problems. The big action is unleashed only after the well-established pressures and tensions reach their breaking point; the stakes rise as the flames do, making the movie a convincing and affecting amalgam of true to life tragedy and cinematic bombast.