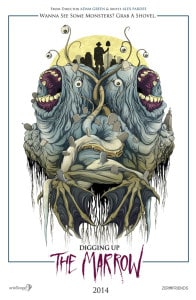 For those of you not familiar with the work of horror director Adam Green, he’s amassed something of a cult following since creating the wonderfully gory Hatchet series, as well as the icy thriller Frozen – not the Disney version – and the TV series Holliston.

In his latest film, Digging Up The Marrow, Green explores his own love for monsters and for his eccentric fans by creating a mockumentary about himself making a movie about a fan who claims to have seen real monsters. It’s an interesting premise that I’m pleased to say works on almost every level, and it makes for an entertaining but somewhat-muted ride.

The film begins with interviews with various horror icons at conventions around the country. They are talking about the allure of monsters and what makes people fascinated with the idea that these creatures could be real, lurking in the shadows and watching us live our lives. We then cut to Green telling us about his work in the film industry and the small but loyal band of fans he’s amassed, along with the trinkets they often send.

One person in particular caught his eye – a man who claims that he has evidence that monsters are real and live underground in elaborate tunnel systems that he has dubbed “the Marrow.” Green and his cinematographer Will Barratt decide to interview this man, played by Ray Wise, and explore his claims.

From the onset, the film has a very accurate documentary feel, from the interviews with real personalities at the beginning to the overall look and presentation of the footage. Aside from the actual horror sequences, Digging Up the Marrow could easily pass for an actual documentary, except for the casting of Wise, who shatters the suspension of disbelief the second he appears onscreen. This is a double-edged sword, however, as Wise turns out a predictably fantastic performance as the unhinged former detective, William Dekker.

Though the film does include some of the more tiresome found-footage tropes, there’s a surprisingly ample amount of freshness here that somehow neutralizes the mind-numbing clichés of the genre.

One element that helps with elevating Marrow above the rest is the creature effects. Although the audience only gets to see the citizens of the Marrow in very bite-sized pieces, what we do see is genuinely scary and very inventive. The idea of an underground colony of monsters, all with different maladies, feels very much like the Howie Mandel vehicle Little Monsters and Clive Barker’s Nightbreed, and that’s not a bad thing.

Unfortunately, like so many other films in the horror category, the conclusion is lackluster, abrupt and unfulfilling. Green crafted a very interesting story here, and it’s a shame that (probably due to budget constraints) we couldn’t see more of it.

What is here is solid though, which isn’t something I say lightly these days, with a never-ending stream of mockumentary and found-footage films washing over us on a near-weekly basis. If you’re expecting the level of violence and gore that Green’s Hatchet is known for, you’ll be disappointed. But as a fan of monsters myself, I had a good time Digging Up the Marrow.