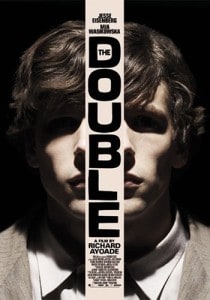 2014 appears to be the year of the doppelganger, or more specifically, the year of film adaptations based on doppelganger-centric literature as writer/director Richard Ayoade rolls out his sophomore effort, The Double, co-written with Avi Korine based on the novella by Fyodor Dostoevsky. Much like his debut, 2010’s Submarine, Ayoade’s latest cinematic offering showcases his ability to pantomime his various influences, married perfectly with his deadpan wit and humor; however, with his latest he gradually begins to display a distinctive visual style.

Simon James (Jesse Eisenberg) drifts along in a rather meaningless life, days spent toiling away in a tight-quartered cubicle where his soul is slowly being crushed much like the numbers in his day-to-day work; his employment consists of assimilating human beings into quantifiable measurements through statistics. In short, his work consists of dismantling one’s identity into a pile of charts, vectors and integers, and with this type of work of course Simon James’s identity was dismantled quite some time ago.

Simon, who is exceedingly sheepish and overly skittish, still maintains a sliver of desire and ambition, unfortunately he lacks any and all social skills to act on any of them. He’s obsessed with his co-worker and across-the-way neighbor, Hannah (Mia Wasikowska), incessantly finding ways to be around her or spying on her, while she’s in her apartment through his telescope a la A Short Film About Love. Even rummaging through her building’s trash room collecting her ripped up drawings. He longs to be with her, to possess the ability to simply talk with her and tell her everything because he can tell that’s she’s just as lonely as he. Finally, an opportunity presents itself when Simon discovers his doppelganger, James Simon, who happens to be a bizarro version of himself, gaining employment at Simon’s work.

Reticent at first, Simon begins to socialize with James quickly becoming friends, utilizing their respective strengths in order to help one another. Simon applies his above-average mathematical skills to further James’s career, while James coaches Simon in the area of social interaction, even providing pointers on how to woo Hannah. Unfortunately, this mutually beneficial relationship quickly turns sour, as the two (or one) become self-destructive in their pursuits to destroy the other.

Even though, Ayoade and Korine’s narrative plays out in a relatively predictable manner, the injection of Ayoade’s deadpan, slightly absurdist humor keeps The Double entertaining and light throughout this tale of personified dueling identities. What elevates this film comes in the form of the Ayoade’s influences, the aforementioned pantomime, that permeate throughout most of the frames along with his own stylistic flourishes in color coded lighting, staging and, at times, ethereal cinematography from Erik Wilson. Not to mention the top-notch production design, effectively creating a world that appears to equal parts eighties and dystopian future, culminating into a highly captivating viewing experience.