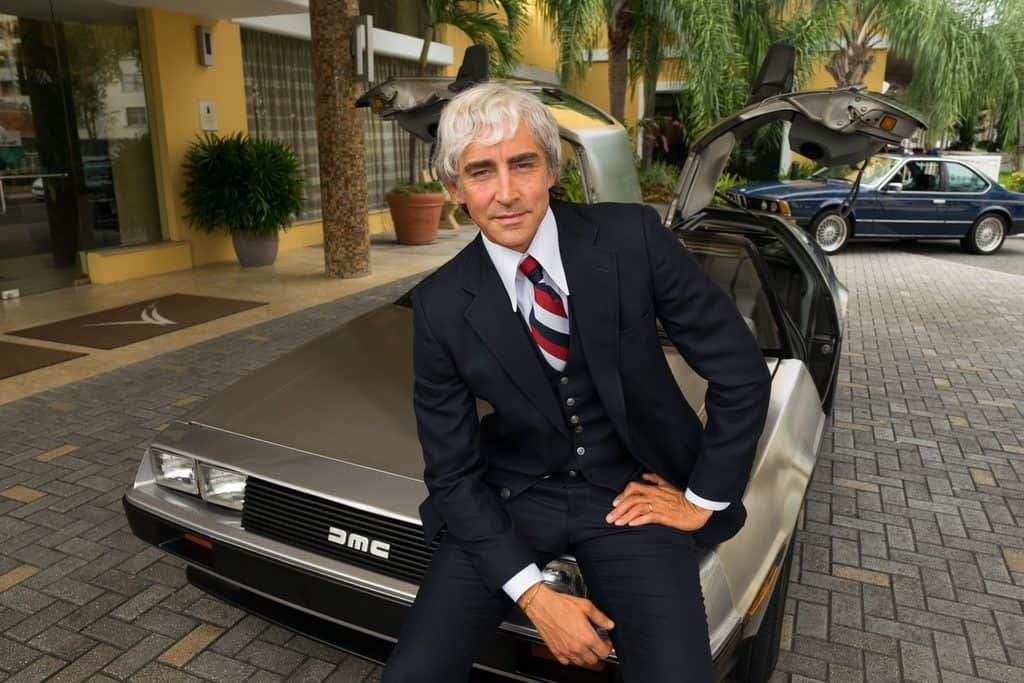 Everyone knows what a DeLorean is, or I hope most do. It’s the car that Doc Brown makes into a time machine in Back to the Future. The one where the door opens upward. The one we all remember, just as John DeLorean (Lee Pace) said we would in Nick Hamm’s Driven.

Inspired by real events, Driven does some time traveling of its own between the United States v. John DeLorean trial in 1984 and the events leading up to it in the late 1970s. We see the rise and, well not exactly, fall of John DeLorean, and the reality of his attempts to get the DMC-12 sports car made and the DeLorean Motor Company off the ground. 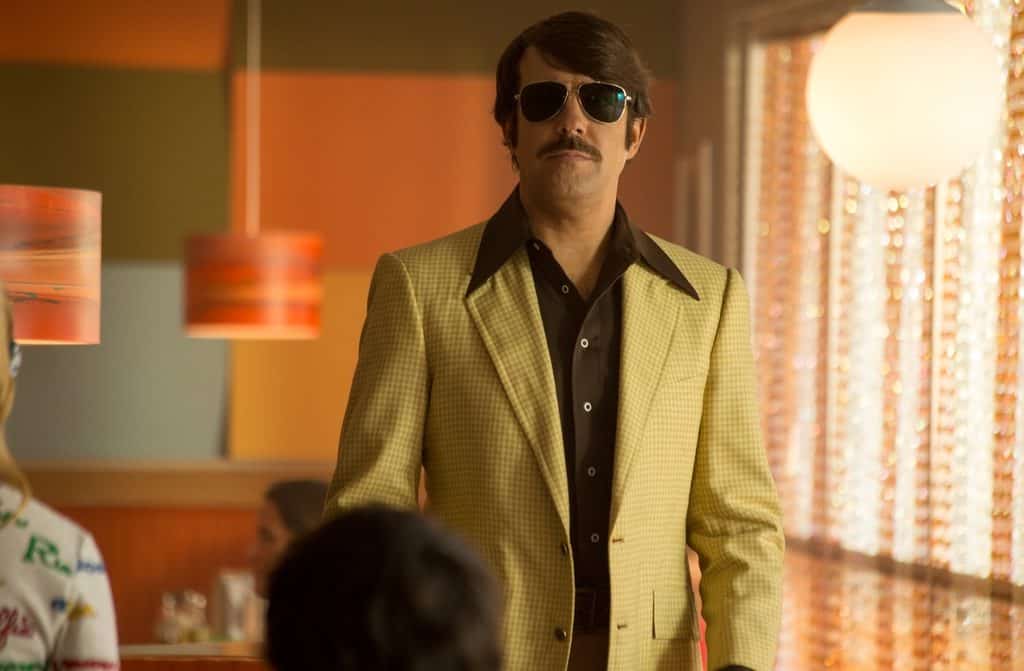 The problem becomes the car isn’t good and isn’t selling. The British government invests in his factory in Ireland; others invest in his business but soon; DeLorean doesn’t have enough to make payroll. He needs to raise $30 million in 10 days to keep control of his company. Desperate, DeLorean becomes involved in the beginnings of a large cocaine deal to try to turn the little money he has left into just enough to save his business.

DeLorean is eventually arrested by the FBI, which has been observing and recording him. During the trial, he works to prove the FBI entrapped him in the crime.

What drew me into the film is not DeLorean but the story around him, which is that of Jim Hoffman (Jason Sudeikis). Hoffman not only introduces DeLorean to the drug deal but is also responsible for some of the surveillance. He is an FBI informant, toeing the line between wanting to be DeLorean’s friend and wanting to sell him out to Special Agent Benedict Tisa (Corey Stoll) who aims to catch a big-time drug dealer, Morgan Hetrick (Michael Cudlitz). A former pilot, Hoffman was caught doing a job for Hetrick and is constantly trying to get himself and his family out of the mess he has created. 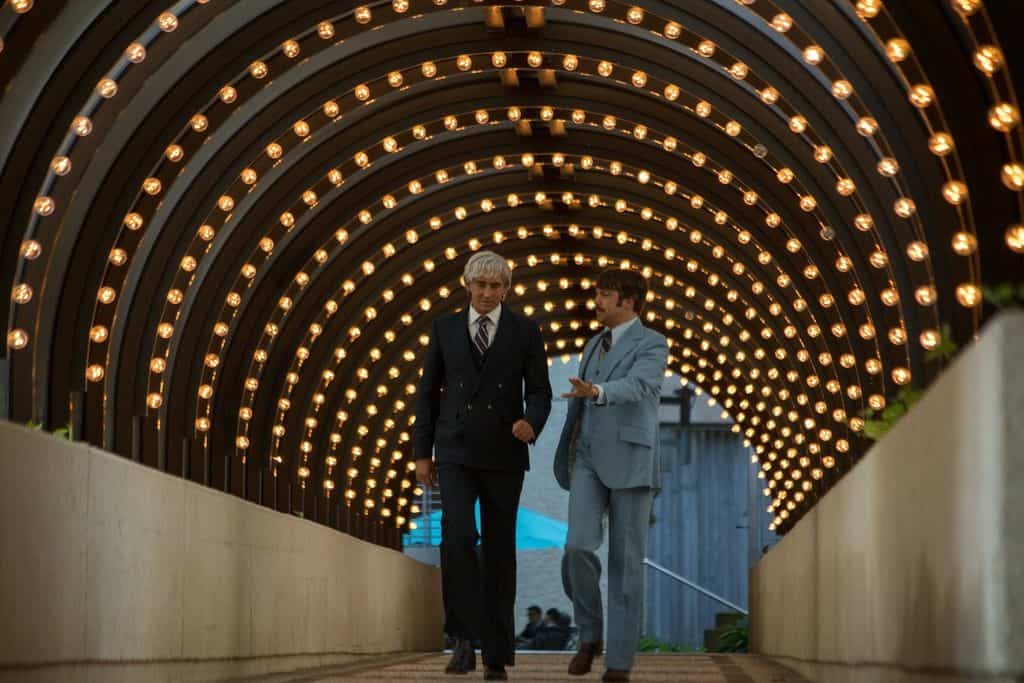 Sudeikis’ character is , much like the actor himself, an everyman. Despite becoming an FBI informant, Hoffman is a regular guy caught up in the wrong things. The character is not extremely likable, as he tends to come across as someone who is always trying to make a deal, but he’s relatable, with enough complexity to grow and change. We’ve seen the film about the wealthy creator whose idea is too big for reality, but we rarely see the film about the guy with the criminal past, who needs to incriminate the wealthy creator to better his own life.

Sudeikis is capable of such lightness but also such nastiness. Anyone who has seen him in Colossal knows exactly how mean his characters can be; it’s always exciting to watch him because you never know which version you’ll see. Sudeikis makes this film fun, in a way that only he can, by being wise-crackingly honest. 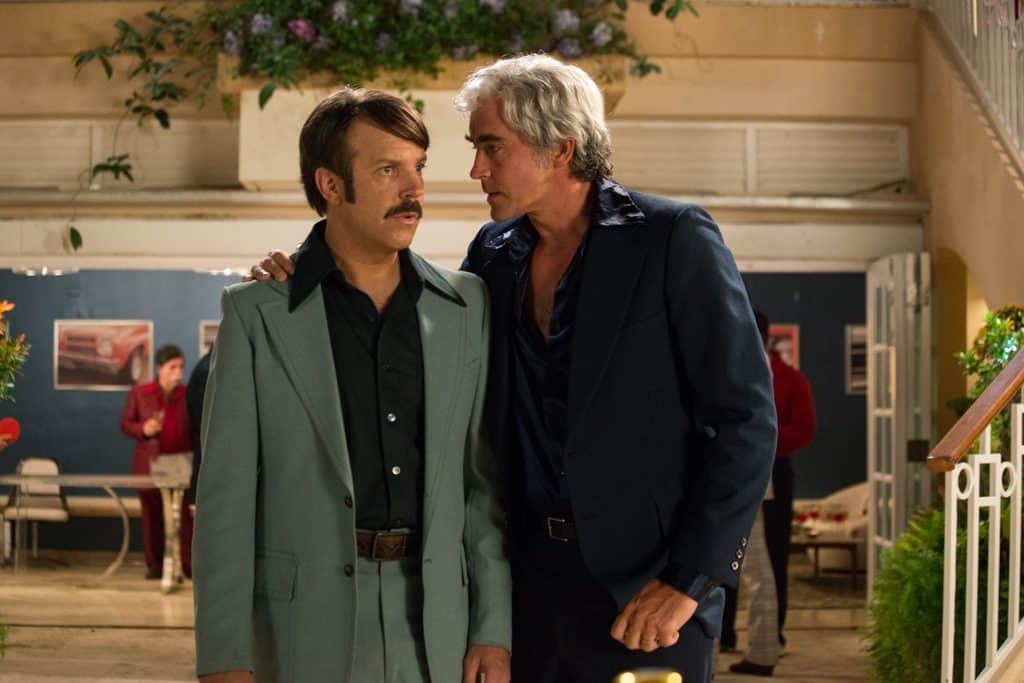 Pace encapsulates the genius-persona of DeLorean well— combining the awkward, cold  and robotic nature you sometimes see with brilliant people with heart. As the film wears on, the camaraderie, which thinly joins DeLorean and Hoffman, becomes more defined and you can see clear moments of close friendship. Overall though, the trust between them, especially DeLorean’s trust in Hoffman, materializes fast, too fast over the course of house parties, hangouts—they are next door neighbors—for it to be believable.

The court sequences are well executed because of the way the script is structured, with flashbacks between the trial and the events leading up to it. Each story lacks the time it deserves to breathe, to expand and contract in its space with enough details for the audience to fully invest. Despite its flaws, the film, like Sudeikis, has a lightness to it. It works well to give a snapshot into a complex issue and serves as a decent addition to the summer film circuit.