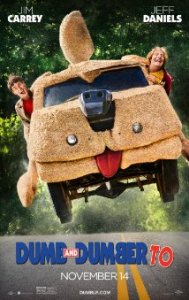 Just in case the 20 years between movies clouded your memory, Dumb and Dumber To includes some helpful split screens in the closing credits that highlight its recycled gags from the 1994 original. Most of the material hasn’t aged well and/or was handled much better the first time around. The frustrating thing is a lot of the new stuff works in an idiotically inspired way, thanks to the game duo of Jim Carrey and Jeff Daniels. Part of the joke is that our lovable 30-something dimwits from Dumb and Dumber haven’t matured, but it’s not quite as fun (and a little uncomfortable) to watch 50-somethings bumble around and unleash a more mean-spirited brand of stupidity on the unsuspecting.

Emphasizing the extent to which time has stood still for Lloyd Christmas (Carrey) and Harry Dunne (Daniels) is an opening bit that puts a button on a 20-year “prank” in which Lloyd has been faking comatose insanity. The joke ends when Harry reveals he’s facing a real medical emergency and needs a kidney transplant. After discovering he impregnated the infamous (to Dumb fans) Fraida Felcher (Kathleen Turner) in the early ‘90s, Harry saddles up for another road trip with Lloyd to track down his daughter Penny (Rachel Melvin) and, more importantly, her kidney. The duo locates Penny’s adoptive parents, a world-famous scientist (Steve Tom) and greedy trophy wife Adele (Laurie Holden), before heading to a tech conference in El Paso.

While the original film was able to effectively manage its superfluous kidnapping subplot, the machinations here are way too laborious and gum up the comedic works. The scientist tasks Harry and Lloyd with delivering “the most important invention ever” to the El Paso conference. Meanwhile, Adele is trying to murder her husband and start a life with her lover. Rob Riggle shows up in dual roles as twin brothers – one the said lover; one a special ops agent sent to kill the titular dummies. The FBI eventually gets involved (again), and so on, and so on. It’s a clunky setup with a lot of fat that could be trimmed to allow Carrey and Daniels to play with more impunity.

Similar to the rickety plot, much of the comedy is arduously set up by directors Peter and Bobby Farrelly, along with their four credited co-writers. Drawn-out routines signal desperation to get back to their ‘90s heyday with payoffs that just aren’t as organic now as they were then. In one particularly long sequence an explosion in hearse leads to Harry losing his hearing, leads to Lloyd yelling at him, leads to procuring hearing aids from a retirement home, leads to a quick, but mostly benign, sexual gross-out with a lonely elderly woman. It’s all more time-consuming than side-splitting.

Carrey and Daniels shine when given the opportunity for more quick-fire shtick and curious reactions to what’s happening around them. They slip back into their roles well and aren’t just going through the motions in hopes of recapturing the magic, showing a real eagerness to create more memorable moments. Supporting players mostly exist to be victimized or act as bridges to the next bit, though Kathleen Turner deserves mention for her willingness to be peppered with a multitude of hurtful (if sometimes funny) barbs. Melvin shows some pluck as Penny, but her characterization is just a young female impersonating a mashup of Harry and Lloyd. I suppose this is the Farrellys’ sophisticated commentary that nature takes precedent over nurture. Or not.

The story doesn’t work, and even though contrived through-lines aren’t the ultimate measure of success or failure here, it makes it much harder to champion the efforts of Carrey and Daniels. After two decades the talented stars were ready, but the Farrelly brothers weren’t up to the challenge. Dumb and Dumber To is a sequel that came way too late and, at a protracted 110 minutes, overstays its welcome.