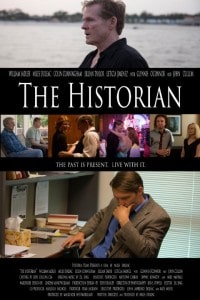 The world of academia is incredibly ripe for real-life drama. I should know, I spent more than a decade in it. So, too, did director Miles Doleac before he took to acting a few years ago.

His immaturity is evident in his first all-consuming project – The Historian – which he also produced, wrote and directed. With a meandering script and a heavy amount of overacting, it is easy to argue that Doleac is not in the same class as other triple threats like Woody Allen. But for a first-time attempt, it’s not a total loss.

Rhodes is offered a one-year visiting professor appointment and, separated from his wife, enters into a relationship with Densmore that results in some ethical trouble, followed by yet another relationship with a fellow professor.

The teacher-student relationship – beginning as a one-night stand and transforming into something deeper – is compelling but plays out mostly as expected. The pair can speak the same language of academia and, perhaps because of Anna’s openness, energy and similar professional goals, he becomes her confidant and caregiver.

A second storyline features Sadler as Densmore’s woeful dissertation chair, Professor Hadley, who has not published any academic writing in several years. Students are not lining up to take his courses; and he has an ailing father. He comes off as a man at the end of his rope.

The relationship between these three and Messer set us up for some scholastic stagecraft, as we follow their trials over the course of a year. But the conflicts are resolved in a much-too-tidy ending, leaving me feeling a bit cheated by the wrap-up. I would have preferred the characters suffer a few more scars for believability’s sake if nothing else.

With a truly stellar performance, Sadler is one of the film’s more experienced actors, and it shows. Unfortunately too many stories were introduced and not thoroughly told, and the film was scattered and unfocused. The poor acting, jumbled structure, unrealistic “Hollywood” ending and predictable plot points left me wanting to leave The Historian in the past.