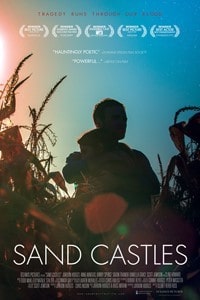 The story at the heart of Sand Castles could be ripped from the headlines. A young girl is abducted by a sex offender and held captive for more than a decade. Some films would focus on the abduction, the search for the kidnapped girl, and/or the apprehension of the perpetrator (for example, see Prisoners). However, Jordon Hodges’ screenplay deals with the girl’s return and what that means to her and her family.

The film shows a family enjoying a day at the beach. Though the mother, Marie Daly (Saxon Trainor), is elsewhere, her husband Jim (John Newkirk) is with his son, Noah, and daughter, Lauren. The son has left something back at his sand castle, so Dad puts the kids in the vehicle and goes to retrieve the boy’s toy. The boy exits the vehicle to play with a puppy and suddenly the vehicle takes off with the girl still inside. Lauren remains missing for over ten years. My initial question is how could the police not find the vehicle given that it is the Daly’s? After all, they would know the make/model and license plate number. But as I suggested in the first paragraph, the film is uninterested in the search that must have taken place.

The film does not present events in absolute chronological order, but that did not present a problem as the flashbacks are well-executed. We see Marie ten years later. Probably because she has never gotten over the loss of Lauren, Marie is a major alcoholic who relies heavily on Noah (Jordon Hodges). In one of those flashbacks, the father commits suicide; that was his way of dealing with his daughter’s abduction. The other member of the family is Jim’s brother, Tommy (Randy Spence). He drinks too much and is addicted to cocaine. Now in his early 20s, Noah seems to be the only member of the family who is well-adjusted but that should not be taken to mean he misses his sister any less. He has simply learned to deal with things in a mature manner rather than self-destruct like his mother, father, and uncle.

Lauren (Anne Winters) is found outside a diner in the small Indiana town where she grew up. She is first placed in the hospital which is where her family visits after being informed by Detective Cloud (Scott Jemison) that she has resurfaced. She does not speak to anyone including her family; even when she returns home, she refuses to talk. A social worker named Alison (Daniella Grace) visits the Daly home in an attempt to help Lauren adjust. Eventually, Lauren begins to come out of her shell, particularly toward Noah. However, things do not stay sane for long. Alison has reported Marie’s drinking problem to her superior. A Child Protective Services official and a police officer visit the Daly home and find alcohol in Marie’s room. Lauren is removed from the home that she has just started to get used to again and is placed with a foster family. Once again the Dalys lose Lauren.

Meanwhile, Tommy gets Detective Cloud’s computer login information and searches for the sex offender who resembles the man a witness claimed is the kidnapper. The film does not explain how the witness knows this, and I found that aspect troubling. Tommy finds the perpetrator via his vehicle and breaks into the man’s home. What happens next must be seen as I do not wish to ruin a climactic moment in the film.

The film ends on tragic yet hopeful note involving something Noah does for Lauren after she is reunited with her family. There is also a connection between Alison and Noah earlier in the film that has consequences for the movie’s denouement. I think writing about what happens at the end would constitute a spoiler, so I will leave the film’s conclusion out of this review. I will say that I did not see that ending coming, and I dare say that even the most astute viewer will be surprised.

I have given the film a 6/10 because there are a few unnecessary and confusing moments that distract from the story’s strength. But Jordon Hodges is only in his late 20s; he has not been acting long; and this is his first solo screenplay (he co-wrote another film in 2011). Clenet Verdi-Rose has been a second assistant director on numerous shows, but this is only his third feature as a director. So, I think both men are talented enough that with more projects under their belts they have the potential to do even better work in the future. It must be said that the filmhas been well-received at numerous festivals including the winning of several awards, and I admit that I can understand why. I would recommend Sand Castles to anyone interested in seeing an interesting independent film about family.