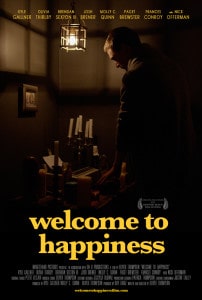 Let’s get this out of the way right off the bat: If you aren’t a fan of Wes Anderson’s catalogue of films, you’ll have problems with Oliver Thompson’s Welcome to Happiness. Stylistically and tonally, this is an Anderson clone, from the slow-motion walks to the quirky sets and camerawork. If this is something you can look at as homage, rather than cloning someone else’s voice, then you’ll have a good time with this film.

We begin with Kyle Gallner playing Woody, a children’s book author who resides in an apartment with a very peculiar and intriguing feature. At random times, a mysterious dot matrix printer will inexplicably spit out a sheet of paper containing a number of questions Woody must ask a seemingly random stranger who, only moments later, knocks on his door.

Woody then instructs the stranger to hold a black rock and think of a color, and another rock in a different room then turns that color. Afterward, he guides the stranger into his closet where a tiny door is located that will supposedly lead the person toward a life-changing experience. If you weren’t interested in checking this out before, you surely should be now.

The film flutters between several storylines that, at first, seem connected in only superficial ways – this person knows that person who is a friend of this other person, etc., etc. But as we progress down this rabbit hole of coincidence and contemplation, more connections begin to form. 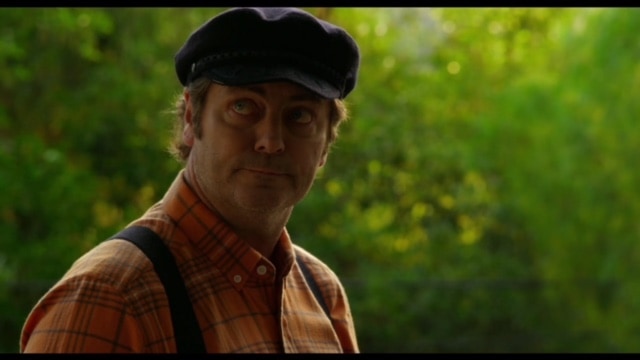 Though it contains its share of drama, Welcome to Happiness is, as the title suggests, an inherently happy film. It explores the relationship between coincidence and the elements in our lives we can’t change and the positives that can be drawn from any situation, no matter how tragic it may seem.

This theme sounds like fodder for the next faith-based movie – saccharine heavy and eye-roll inducing – but Thompson infuses enough charm and wit into the characters and situations that one can’t help but buy into the ridiculous conceit.

The only thing that knocks this down a few pegs for me is the aforementioned Wes Anderson vibe heavily injected throughout. The score sounded dangerously similar to something composed by Mark Mothersbaugh; the production design was quirky but very well done; and the cinematography needlessly featured several slow-motion walking shots with music playing over top, a trademark Anderson trope.

After mulling this over, the mimicry perhaps just didn’t sit well with me because Anderson is still very much alive and well and making great movies in his original voice. It felt less like a tribute to his work and more like a copy.

Despite the almost shameless and somewhat-distracting cloning, it was at least a competent clone. Welcome to Happiness is an entertaining indie that features an interesting story and uplifting payoff that will make you leave the theater smiling even if you thought you just cheated on Wes Anderson with another director.