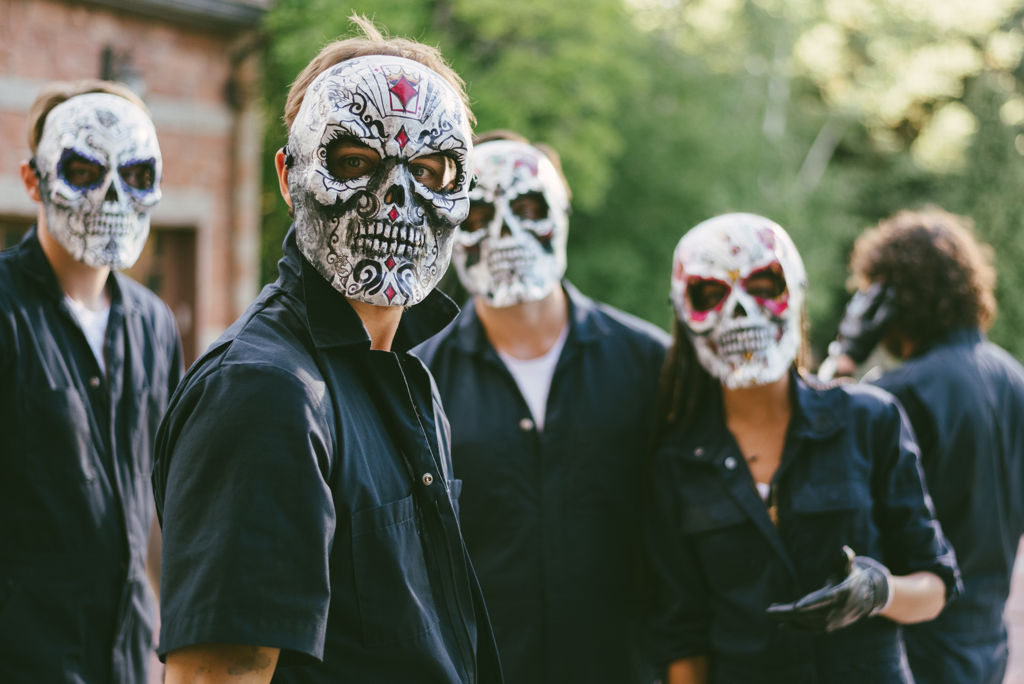 Echo Boomers, directed and co-written by Seth Savoy, is positioned as “a true story if you believe in such things” and is told through the narrative lense of Lance Zutterland (Patrick Schwarzenegger) and others who were involved in a series of home robberies that land them in jail. They relay their stories to an unnamed Author (Lesley Ann Warren) who is writing a book on their experience.

Lance gets involved in all this after heading to Chicago after his cousin Jack (Gilles Geary) tells him about a job opportunity. It turns out the job is robbing houses, wealthy houses, and taking the important things and destroying the rest. Lance doesn’t know this until his first day when he walks into a home and sees the chaos unfold.

The crew doing these jobs is identified in Lance’s narration. Chandler Gaines (Jacob Alexander), a veteran with PTSD who couldn’t get a factory job, is their getaway driver. Stewart (Oliver Cooper) is their security expert and helps them get into the houses after being unable to get a job in Silicon Valley.

Allie Tucker (Hayley Law), the only woman on the crew, was an activist in college with Ellis Beck (Alex Pettyfer), the de facto leader. The two are romantically involved and started all of this. She graffitis much of the messaging on the walls dictating their purpose for these robberies.

Items retrieved are delivered to Mel Donnelly (Michael Shannon) who owns a shipping container company and ships the contents overseas for payment. Donnelly is scary, that brand of intense, authoritative mean-but-could-get-meaner temperamen that  we’ve come to see in countless other Michael Shannon films. He’s a good anchor for the younger actors like Schwarzenegger, who sounds wooden during some of his delivery but finds his groove in the more emotional scenes.

The crew receives the addresses of the residences as well as a list of valuable items from home insurance agents. They’re paid for each successful job and do prior research on each home so as not to get caught. Lance’s job is knowing which paintings in the houses are of value, tapping into his art-major skillset. The art plotline is flimsy, despite it being mentioned a lot. Lance often says it’s the line of work he wants to pursue, but you don’t see him focus on art much while in the houses. The more he does these jobs, the more they and the people surrounding them become his focus.

After the first job, Lance freaks out and blames Jack for not being honest about the prospect. Jack is manipulative, impulsive and plays the “family” card with Lance, so much that we believe it holds weight. He convinces Lance to come out with the group to a bar, and while there, Ellis explains the purpose behind what they do.

Ellis and Lance both owe a significant amount in student loans. “We’re not just stealing, we’re sending a message,” Ellis says. They got the grades and did everything they were told but still have nothing. He says they deserve this and that the insurance will reimburse most of what they stole.

After the speech and partying for the evening, Lance stays. It’s no surprise they end up in jail — as giving people this much money and power, especially people who feel like they’re owed, is a recipe for anarchy.

The dialogue does most of the heavy lifting. When Allie is interviewed by the author, she says the first thing these men destroy when entering these houses says everything about them. Jack destroys family photos because he has issues with his parents and never sees them. Chandler was abused by his father and was poor growing up, so he often destroys children’s rooms. This kind of narration adds depth to the characters.

The film is also composed of different “lessons,” which turn into “rules” that Lance recites, such as “It’s all about who you know”  (lesson No. 1) and “When the system is corrupt, why play by their rules?” (lesson No. 2). It’s a cheesy tactic summing up the film’s themes. Reciting “rules” works in a film like Zombieland, but here, they appear childish in the midst of very adult circumstances.

The throughline of this can be boiled down to a revenge fantasy come to life. Though the story is true, the premise is thin and the justification behind it doesn’t hold up. A lot of young people, especially the Echo Boomers (children of boomers who are often compared to that generation) are struggling but don’t go around destroying things. If the individuals in this film were truly focused on helping others that were screwed over, that would have given more depth to their story. It’s hard to cheer for people who say the system is broken but do nothing to fix it.