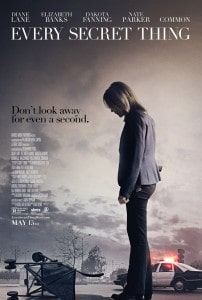 The secrets of Every Secret Thing should feel bigger. There’s lots of talent behind and in front of the camera, working with potentially deeply affecting, relatable material, but the drama is flat. The subject matter of the crimes at the center of the film is horrific and stirs emotions on premise alone, though that’s not enough to make up for pedestrian execution.

Every Secret Thing was produced by Frances McDormand, written by Nicole Holofcener (Enough Said, Lovely & Amazing), and directed by Amy Berg, who’s dealt with twisted real-life crime tales in the documentaries West of Memphis and Deliver us From Evil. The solid cast includes Diane Lane, Elizabeth Banks, and Dakota Fanning. Despite the credits of all involved, the film is never as contemplative as it posits to be. The narrative slowly builds to reveals that merely resolve the potboiler mysteries rather than scratch below the surface to get to the heart of the misery suffered by all the players. It’s a slow burn with little emotional sizzle.

When they were 11, Ronnie and Alice were convicted of kidnapping and killing an infant girl. Now 18 and released from juvenile detention, Ronnie (Fanning) works at a bagel shop in a constant daze. Alice (Danielle Macdonald) wanders around town and lies to her uptight mother Helen (Lane) about searching for a job. Two weeks after the teens are released, another young girl goes missing. Has one, or both, of them become a repeat offender? 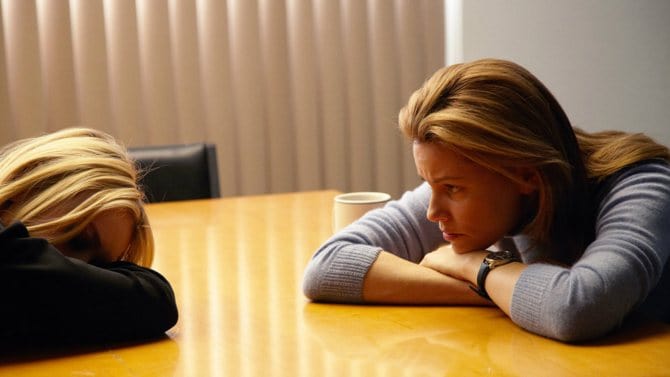 That’s the question that drives the plot, though the answer is hunted with a distinct lack of desperation. The mother of the missing girl is frantic when her daughter first disappears and in a later scene blames herself for a lapse in attentiveness, but then vanishes from the movie. To add weight to the search, Detective Nancy Porter (Banks) is given a connection to the previous case; however, she doesn’t appear to be overly driven. She loses sleep and calmly relays to several people how the situation is serious, but also withholds pertinent knowledge of the previous kidnapping from her partner (Nate Parker). It could be that she’s deflecting and/or internalizing her anguish over the situation, or it could be that Detective Porter is a mere cipher to help get us from A to B.

That journey is a winding one – only because of multiple timelines, not because of twisty, engaging intrigue. We keep jumping back seven years to the first kidnapping and its senseless outcome. Sometimes we get Ronnie’s perspective, sometimes Alice’s. Nothing interesting is done with the various warped perspectives of the two damaged youths. Revisionist flashbacks are in line with the film’s common practice of parsing out information plainly in piecemeal fashion. The “no, this is what really happened” reveals grow tiresome.

There are hints at cycles of dysfunction – Ronnie’s parents are absent; Helen’s phony smile can’t hide the disdain for her overweight daughter – that feel like narrative obligation rather than deep analysis. Ronnie and Helen are off-puttingly morose and delusional, respectively, but Fanning and Lane each find at least some substance to latch on to. Unfortunately, for much of the third act they are relegated to filling in story gaps. The emotional heft is left for Macdonald as Alice, and neither actress nor character is as interesting as their counterparts. Perhaps that’s fitting for a film that seems so content to be dull.