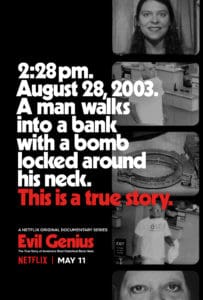 Just a few weeks after releasing the bizarre, fascinating and impeccably crafted documentary series Wild Wild Country, Netflix is releasing another crime doc produced by the Duplass brothers, titled Evil Genius: The True Story of America’s Most Diabolical Bank Heist. Directed by Barbara Schroeder and Trey Borzillieri, the film tells the incredible story of “The Pizza Bomber Heist,” which took place in Erie, Pennsylvania, in 2003.

On August 28, 2003, a man walked into a PNC Bank, gave the teller a note stating he had a bomb and demanding that she empty the registers. After making off with a few thousand dollars, he was swiftly apprehended by police, who discover that same man yelling that he was kidnapped and had a collar locked to his neck with a bomb attached. Before the bomb squad could arrive, the bomb detonated, killing the man.

As police began an investigation, they discovered that the man was a pizza delivery driver who was instructed to take an order to an abandoned radio tower, where he was jumped and had a sophisticated device attached to his neck, which locked a bomb to his chest. As insane as that story sounds, it only gets crazier from there. Authorities begin uncovering the various suspects in the case, each of whom have their own wild backstory. The story is truly stranger than fiction, and the film is worth a look for that alone.

There’s a noticeable lack of polish in Evil Genius compared to Wild Wild Country, however, so although it’s a compelling journey, it’s not a particularly pretty one to watch. The first two episodes feature only a few moments of narration (in fact, I had to revise this portion of the review as I completely forgot they were even there), but in episodes three and four it increases significantly. While not evident from the beginning, co-director and producer Trey Borzillieri handles this narration. It may have been less jarring if he was a more prominent figure from the beginning, but in the latter portions of the series, we spend a  lot of time with him either on camera or through conversations and narration. The film transforms from a fascinating exploration into this heist and subsequent series of murders to an investigation piece where the filmmakers were actively shaping the outcome. This isn’t inherently problematic from a narrative perspective, but it causes the film to feel structurally inconsistent. 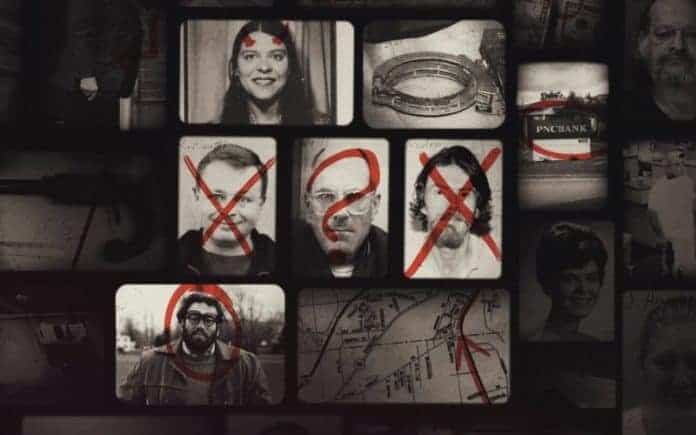 Still, it does little to take away from the journey — which, as someone growing up in Pennsylvania during this incident and remembering watching it on the news, I found to be completely enthralling — despite its sometimes-messy presentation.