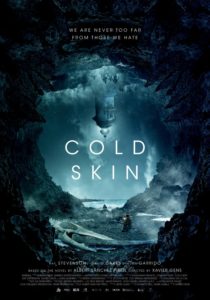 This is a repost of our review from Fantasia Festival 2018. Cold Skin opens in limited release Friday.

Playing out more like a gender-swapped version of The Shape of Water than the Lovecraftian horror it wants to be, Xavier Gens’ latest is a visually pleasing, but ultimately empty, creature feature that, while entertaining at times, fails to evoke the emotional resonance it sets out to achieve.

Set in 1914, the film stars David Oakes as a weather official sent to a remote island near the antarctic circle in order to relieve the current official who is stationed there. Upon his arrival, however, he finds that the previous official has died and that the only person remaining is a strange lighthouse keeper named Gruner, played by Ray Stevenson.

During his first night, the man’s cabin gets attacked by some sort of humanoid creatures, although he’s able to take shelter in the basement until morning. The next day he goes to see Gruner, who wants nothing to do with him, so he attempts to fortify his home by adding wooden bars and a fire pit.

That evening, when the creatures attack again, he miscalculates the range of the fire he set, and it nearly burns the whole place down. Now, he must try to get along with Gruner, who begrudgingly allows him to stay in the lighthouse with him, but he quickly learns it’s not the safe fortress he may have originally believed.

Stevenson’s character of Gruner seems to have gone mad due to the isolation of his job, wanting only to murder as many of the creatures as humanly possible. He seems to have no desire to leave the island or develop a friendship with the nameless protagonist.

He does, however, keep one of the creatures as what is essentially a sex slave, having her help with the chores and laying with her every night. This would seem to be in direct conflict with Gruner’s opinions about the creatures, but it’s made clear he’s anything but a logical thinker.

Looking like mix between del Toro’s fish monster in The Shape of Water and another del Toro creature, Abe Sapien from the Hellboy films, the makeup effects are incredibly well crafted, making it easy to suspend disbelief when it comes to looking at these things as real monsters. Their giant, aqua-colored eyes and ever-flaring nostrils make them look very much like something of myth but retain enough human-like qualities to allow us to empathize with them. They clearly show intelligence, and the question of who the real villain is – the monster or Gruner – is posed early on.

Where Cold Skin falls flat is its storytelling, which brings little to the table and never goes anywhere too interesting. There’s a surface-level love story at play, but again this is something explored more fully in del Toro’s film, and the action sequences, while exciting and well shot, become tired after the first couple scenes of creatures laying siege to the lighthouse. In the end it all felt very inconsequential, with the motivations of both Gruner and the creatures remaining murky until the end.

It’s not without its moments, but Cold Skin is, for the most part, a banal action-horror tale with a one-dimensional lead and some borderline-cringeworthy voiceover narration that detracts from the narrative. Its creature effects are spot on, however, and it’s well shot in its beautiful locale. But the pretty environment and solid makeup work aren’t enough to warrant a recommendation.