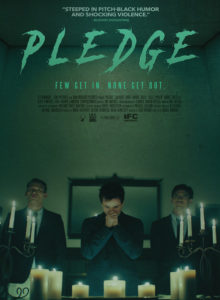 This is a repost of our review from Fantasia 2018. Pledge opens in theaters and on VOD platforms Friday.

With real-life horror stories about fraternity hazing seemingly popping up a couple times a year, it seems like fertile ground for the subject of a horror movie. We’ve seen hazing horror in the past as far back as 1980 with Terror Train, but Daniel Robbin’s Pledge looks to up the ante and dive headlong into a secret frat that takes hazing to a whole new level.

The film involves three college freshman who keep striking out during pledge week, due to the predominantly white jocks finding them too weird or dorky. Just when they’re about to hang up the towel and go home to drink some beer and play Xbox, they’re approached by a beautiful young woman who invites them to an exclusive party. Although they believe this could very well be a prank, they decide to go for it anyway and find themselves in front of a huge home in the middle of the forest.

They party hard that evening, imbibing on the finest of liquors and flirting with many pretty ladies; it was the time of their lives. The next morning, leaving the frat (or rather social club), groggy and hung over, members inform them that they have successfully made it to the next stage and would like them to pledge. Overcome with joy, the three friends head back that evening to begin the pledge process, but they have no idea what horrors they’re in for.

What begins with some, er, light branding, quickly devolves into straight-up violent torture as the club members turn from pleasant gentlemen the night before to ravenous psychopaths. After the branding, the pledges decide to stick it out because they now bear a mark that will remain on their bodies for the rest of their lives. But this doesn’t last long. After the next few rounds of extensive physical and mental abuse, they attempt to call it a day, only to find, of course, that they can’t leave.

Pledge is like Hostel meets The Skulls, with it leaning more heavily on the wanton torture angle than saying anything of substance about the barbaric practice of fraternity hazing in America. It’s graphic at times but never goes too overboard with the carnage, and with two of the three leads coming off as fairly likable, it’s easy to root for their survival.

The bulk of the film takes place in the house of the club, with its numerous rooms and maze-like basement serving as a varied and aesthetically pleasing backdrop. I particularly enjoyed the juxtaposition between the pristine, high-class ambiance of the ground and second floors, compared to the dank torture dungeon underground.

Although the conclusion was a bit underwhelming, I found myself envisioning about how incredible a sequel could be if they did things the right way. Pledge is a good introduction to this mysterious and seemingly ancient fraternity, and I feel like there’s more story to tell here past the relatively simple one on display.

I had a pretty good time with Pledge, more than I thought I would, but while it’s a solidly crafted thriller, it doesn’t stray too far from the standard hazing horror fare we’ve seen before. Pledge is screening at Fantasia Festival in Montreal.