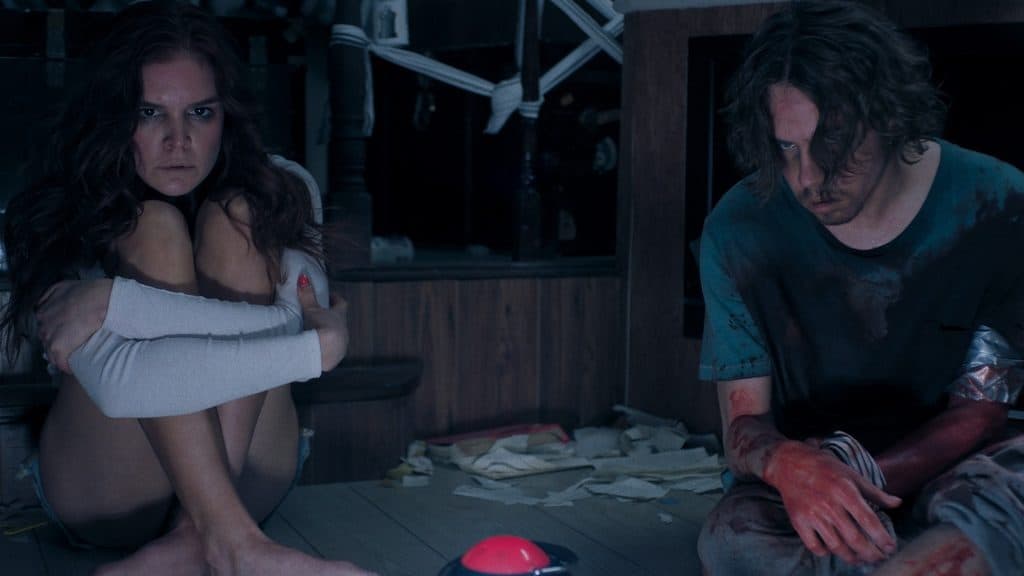 This is a repost of our review from Fantasia Festival 2019, Harpoon opens in limited release Friday. It will be available on VOD and Blu-ray October 8th.

What happens when you take a set of self-absorbed, privileged a-holes and strand them out in the ocean for days on end? According to Rob Grant’s Harpoon, it’s far more humorous (and violent) than you might think. This pitch-black thriller evokes as much laughter as it does unease, balancing horror and comedy at an even keel while never taking itself too seriously in the process.

From its opening narration with comedian Brett Gelman, it’s evident that what we’re about to behold in Harpoon is anything but an earnest story of survival and is instead an exercise in cringey carnage. The main trio involves Jonah (like in the Bible story), Sasha and Richard (like Richard Parker from The Life of Pi), three best friends who seem to find themselves in a triangle of mistrust and backstabbing that begins with Richard (Christopher Gray) mercilessly beating Jonah (Munro Chambers) because he suspects he slept with his girlfriend, Sasha (Emily Tyra). 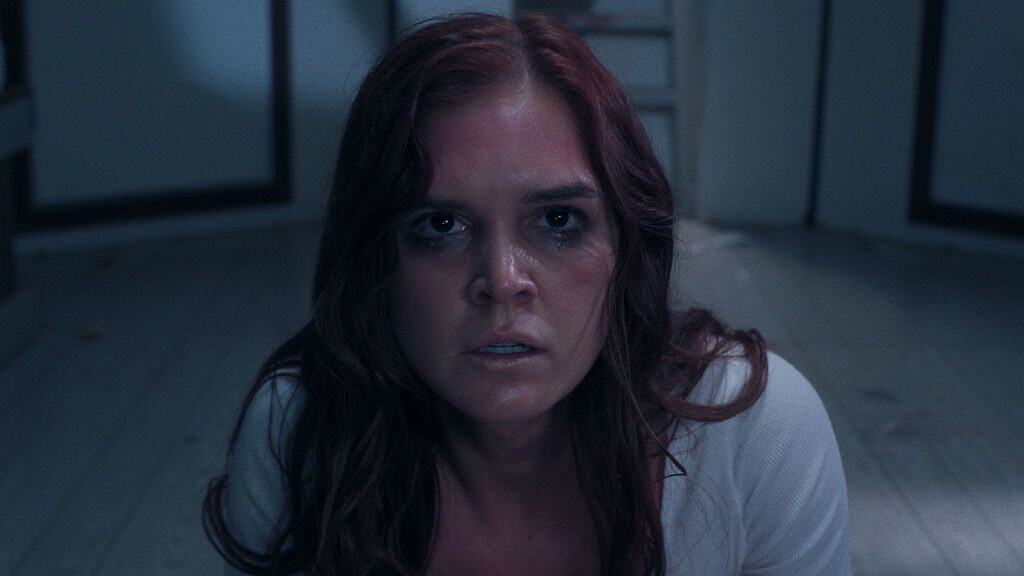 Richard is filthy rich and tries to make amends by taking the two out on his boat for a day of fun in the sun. Unfortunately, things take a turn for the violent when Richard again suspects his girlfriend and best friend of sleeping together, which results in Jonah getting a spear through the hand and Richard getting knocked out by Sasha.

The two initially plan on dumping him overboard and reporting it as an accident, but he awakens after hitting the water, the group crafts an unsteady truce, agreeing to throw any items that could be used as weapons overboard. Upon trying to turn on the boat around to head back, however, they realize the engine is dead and that they’re now stranded in the middle of the sea with no food or water and no way to call for help. 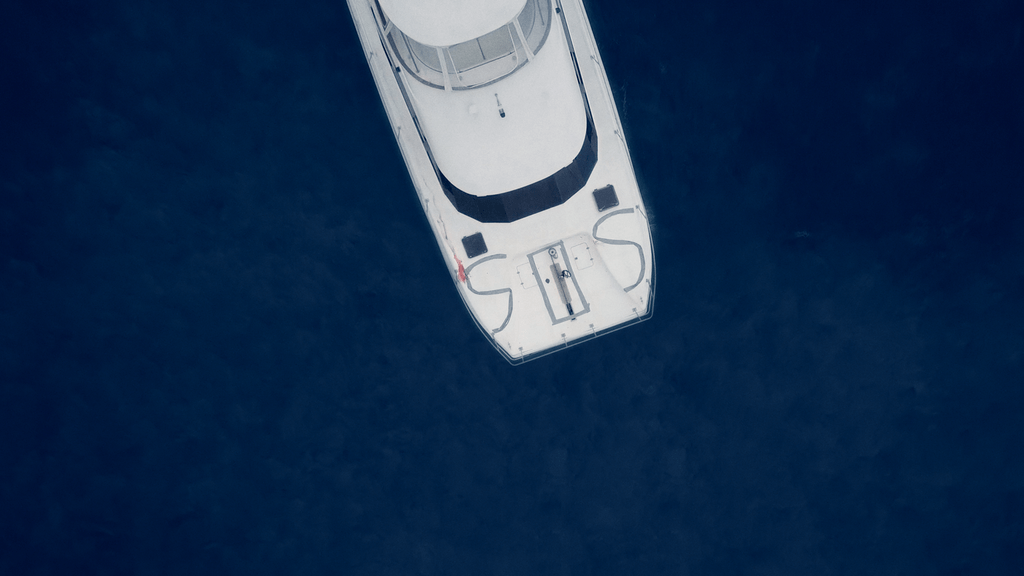 The rampant stupidity of the three central characters would provide for a grating experience in most cases, but with Harpoon, director Grant has the audience revel in their ineptitude, challenging us to predict how this situation can possibly get any worse and how these people can screw themselves even more. This may be a point of contention for some viewers, who might find the hurdle in dealing with these characters for over an hour too great a feat.

Though it may be easy to predict where all of this madness is heading, Grant, along with co-writer Mike Kovac, keep the isolated thriller lively by throwing in fun little wrenches into an already thoroughly fucked machine. Plenty of fresh horrors await these three terrible souls, and Grant gleefully continues to up the ante with every passing moment. 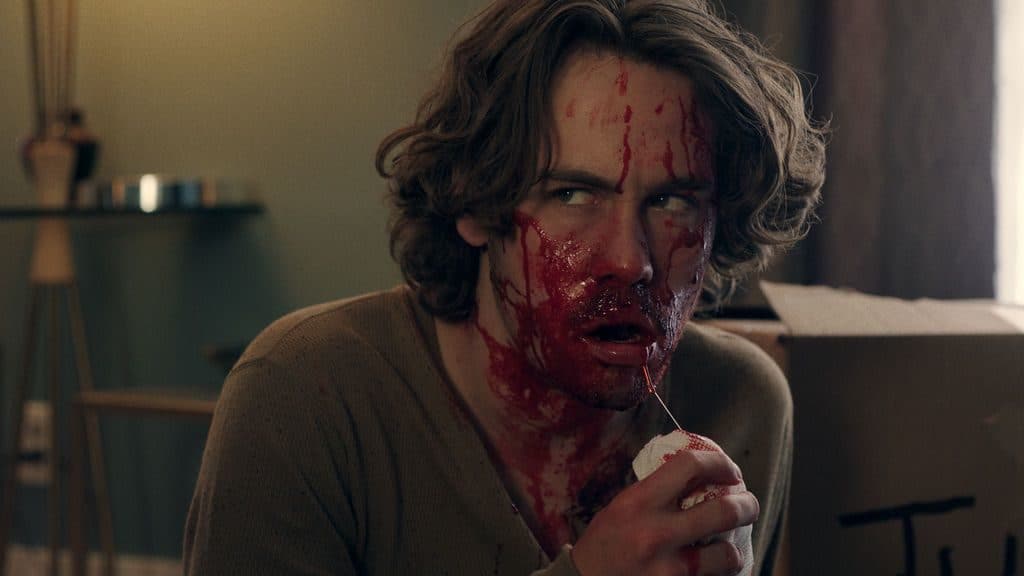 Bloody and brutal, Harpoon mashes up the horror of being stranded at sea with the horror of being stranded with a group of violent, white twenty-somethings, a mixture that yields some gory results, all delivered to great effect. A spear, or harpoon as Sasha continues to inaccurately call it, through the hand becomes the least painful experience Jonah will have on this trip.

Harpoon is a surprisingly refreshing film; with its smart script and devilishly dark story, it’s far more substantive than what you might come to expect from a typical containment thriller. It’s like the anti-lost-at-sea movie, referencing all these famous stories of yore and a fair amount of oceanic superstition in order to portray a less-than-desirable outcome for all those involved.