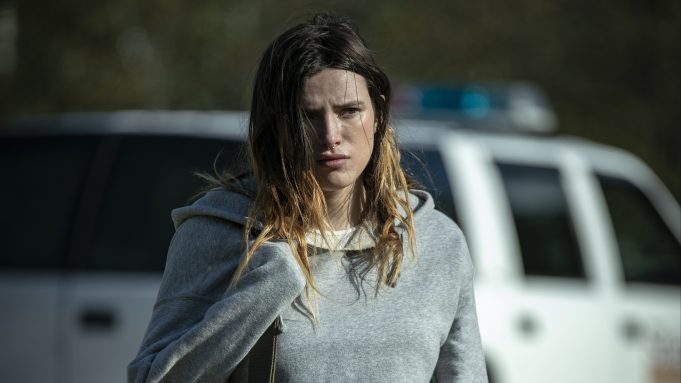 This is a repost of our review from Fantastic Fest 2020, Girl will be available on VOD platforms November 20th.

Aside from being rather SEO unfriendly, the title of Chad Faust’s feature debut, Girl, refers to the nameless protagonist, a supposed stand-in for countless women throughout the country who have been abused, neglected and underestimated by the men in their lives. This conceit gets a bit more murky than perhaps what’s intended, however, as this film’s worn thriller motif plays out.

Bella Thorne plays the nameless protagonist, a young woman searching a small mountain town for her estranged father in order to kill him after he supposedly sent a letter that threatened the life of her mother. After she tracks down his home, only to find him already dead, things get more complicated as she becomes the target of a psychotic playboy (Faust) and a crooked sheriff, played by Mickey Rourke.

Bella Thorne, who also serves as an executive producer, delivers a performance that is middling at best, acting more as a distraction than a believable character. Thorne’s on-again-off-again (Southern?) accent further breaks any semblance of realism the character might convey, with her incomprehensible motivations creating an even deeper rift between the audience and the narrative.

Out of a cast of characters meant to represent archetypes, Faust’s “charmer” is the only one with any resonance, playing the nice guy early on before pulling a 180 and allowing his true form to show. Of course, we all knew what type of person he was going to turn out to be before the inevitable change occurs, so it isn’t much of a surprise when he becomes a psycho.

This is the crux of Girl’s problems: in an attempt to make the characters and themes universal, the plot ends up playing out like any other generic thriller with shallow characters and dialogue. We learn early on that the only thing the girl’s father taught her is how to throw an axe, one of the few unique tidbits in the movie that’s intriguing but very clearly a Chekhov’s gun.

The twist and overall mystery of her father’s death add a bit of flavor to the otherwise banal story, but while it made things slightly more interesting, the way in which they were revealed hardly makes any sense, only confounding the strange actions of nearly everyone involved.

The threadbare plot and sometimes cringey dialogue make for an overall forgettable experience, but the cinematography by Kristofer Bonnell and occasional moments of poignancy, like its surprisingly sweet final scene, prevent Girl from veering completely off the rails.