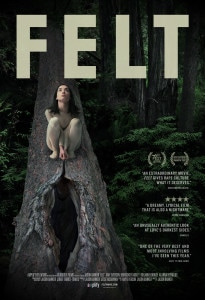 The entire affair that is Jason Banker’s latest feature, Felt (co-written with Amy Everson), feels like a missed opportunity; which, as a whole, remain fairly common within the world of cinematic offerings. However, Banker and Everson’s collaboration happens to deal with the difficulty of existing within a rape culture society and its effect upon the film’s main character. A significant, and undeniably challenging, issue to tackle effectively within the span of 80 minutes. In what could have been a powerful statement, a pointed indictment, instead drags its feet up until its predictable end.

The challenging portion regarding the topic being explored is handled quite effectively given Banker’s directorial process: an inclination towards merely shadowing the main character around the confines of a yet-to-be fully-established narrative, opting instead to allow a storyline to rise about organically. This docu-fiction process is a double-edged sword, however, as the speed at which (and how) that storyline presents itself is, both, beneficial and detrimental. On one hand, it establishes an immediate intimacy while maintaining a much-needed air of authenticity; conversely, the lack of narrative structure hinders the film’s overall message and impact rendering Felt voiceless for much of its runtime.

On the positive side of things, the meandering shadowing that encompasses the bulk of Felt lends the film a sense of unpredictability, unsettling given its themes. It also provides an interesting parallel with Everson, her character/self’s reluctance to discuss the central themes and their implications mirror the film’s general hesitancy to broach the topic as well, ultimately, proving to be its key criticism. The piqued interest/attention levels acquired from the outset are routinely squandered, withering away as it seems content to waste away the minutes beating around the bush, uncertain of what to say. 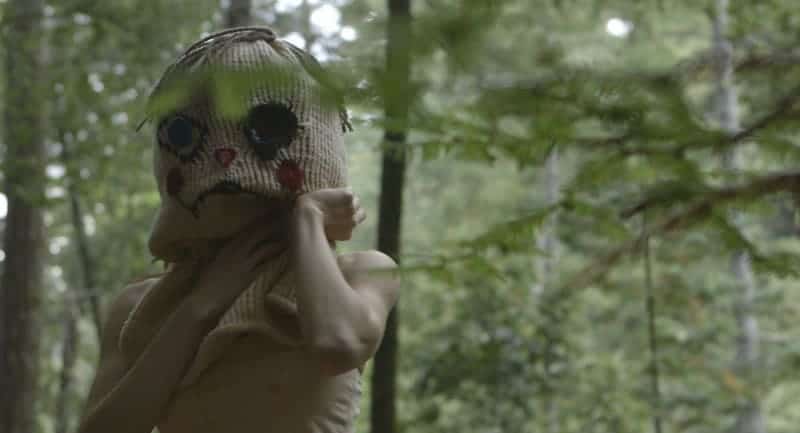 While much of the first half is spent simply following Amy, as she increasingly withdraws from the world and her friends, slowly receding into a fantasy world of her own construct; gradually enveloping herself in a comforting cocoon of coping mechanisms in the form of the artistic endeavors. All of which consists of handmade pieces from Everson herself – bodysuits, masks, and felt sculptures of penises and mustachioed fetal Hitlers in jars.

Adding to the fantasy world aesthetic of Amy’s coping cosplay is the combination of Banker’s lensing of the striking imagery conjured by Everson’s imagination; roving through the forest in an anatomically correct male bodysuit, traipsing about the natural playground of tree husks in the dusklight, ethereal scenes of a dreamland wherein Amy is the master of her domain.

Felt is just as much Everson’s creation as it is Banker’s as the film largely relies on Everson to provide the framework and details. This is her vehicle and with that she delivers in just about every way possible, from the artwork to the tone and atmosphere, alongside her performance – a convincing turn as a traumatized woman gradually reclaiming authority of her life. Differentiating between Everson’s actual interactions and the fabricated exchanges elicited from the fictional side of things is a lost cause, whether she is mask-clad wandering; guarded and withdrawn; amusingly trolling the unsavory male population; or, seizing back control. Everything begins and ends with Everson.