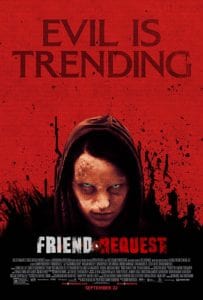 Wholly derivative and focusing on tedium rather than authentic scares, or even a point, Friend Request benignly works through the beats of its supernatural social media premise. Released in several international markets more than a year-and-a-half ago, the film is finally hitting US multiplexes, perhaps to put some distance between some obvious horror parallels (Unfriended, Rings), or more likely, the stinker is being snuck into theaters to capitalize on the start of scary-movie season. It will be forgotten before that season is over.

Popular college student Laura (Alycia Debnam-Carey) has the perfect profile on Friend Request’s Facebook knockoff. She’s got an expanding online circle that’s privy to her nights on the town and beachfront birthday celebrations with her friends. After briefly interacting with loner classmate Marina (Liesl Ahlers), Laura accepts the outcast’s online friend request. Obsessed with, but failing to make a connection IRL, Marina commits suicide. Soon after, Laura and her flesh-and-blood friends become the targets of a ghost in the social media machine.

The supernatural chills work pretty much like those jump-scare videos that were popular on YouTube several years ago. Friend Request doesn’t hide this influence at all. In the first scene, Laura’s friends try to shock her with a cute cat video where the kitty’s face morphs into a scary demon. It doesn’t scare her, but apparently, we’re supposed be terrified by a string of similar jolts. It doesn’t work on us, either.

The film doesn’t even attempt to get at genuine dangers of online activity, instead focusing on a belabored backstory that adds nothing of consequence to the narrative thematically. There’s some anxiety when Laura’s account appears to be being hacked from beyond the grave, making her look insensitive and setting her up as a digital pariah. However, the impact of this potentially concerning situation is shown plainly with a ticker decreasing Laura’s number of online friends, as if that’s the terrifying thing about the situation.

A close comparison is Unfriended, which, upon repeat viewings, has worked much better for me. That film uses the social aspect in an interesting way – taking place all through the laptop screen – and it also captured the problematic nature of toxic interpersonal relationships comingling with online artifice.

In Friend Request, every character serves only their perfunctory purpose as victim or exposition provider. Laura’s boyfriend, Tyler (William Mosely), works in the coroner’s office, which is convenient when bodies start piling up and it’s necessary to research medical records. Kobe (Connor Paolo), who also pines for the protagonist, is something of a computer whiz/researcher, which comes in handy when it’s time to investigate some haunted code and dig deeper into this malevolent presence’s origin.

It’s all nonsense, but that doesn’t mean it couldn’t also be fun. Instead, the boring history of the being is occasionally interrupted with people wandering around darkened corridors and dying or being injured mysteriously after being jumped-scared. A couple of creepy moments, such as some very effective, gross burn makeup and the artwork on Marina’s social media page, aren’t enough to keep us on edge or interested in what’s going on, nor do they outweigh dull thrills like poorly rendered swarms of CG wasps or all the other murky supernatural action. Friend Request loses all its horrors, online and actual, within rote formula.