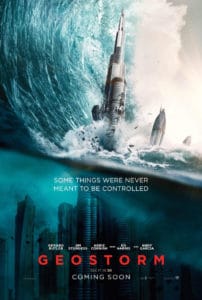 I stand in awe at Geostorm, a film so ludicrously broken, so haphazardly smashed together, so unrepentantly clichéd, so brutally incoherent, so hilariously self-serious, that it crosses the boundaries of terrible, smashes through the meager definitions of good and bad or right and wrong, transforms itself in the interim, and becomes phenomenal.

We talk about movies that are so horrible, they’re entertaining, but perhaps we use that phrase too much. We could use it to define those which feature the occasional over-the-top scene or performance or a plot twist which leaves one reeling. Very rarely can that concept describe an entire two-hour experience.

Reader, Geostorm is one of those experiences.

It is directed by Dean Devlin, who is best known for his work with Roland Emmerich, and here, he seems to have co-opted moments from their respective careers. A Tokyo hailstorm, like in The Day After Tomorrow. A scrappy dog surviving the worst, a la Independence Day. But drawing comparisons to other movies, no matter how good or bad they may be, further augments how unique this one is in its terribleness.

The dialogue isn’t wooden, it’s petrified. People spell out their occupations or connections to other characters to those very individuals, and one-liners, that otherwise insatiable source of fun in action cinema, are in short supply. Scenes of destruction – entire cities flooded, frozen, shocked or burned to their foundations – are treated with a flippancy that could only come from a disorganized script.

The plot is its own marvel. Set in the early 2020s, humanity has come together to fight the effects of climate change by creating a complex satellite system that controls the weather. It can disband hurricanes, tornadoes and floods with ease. The project is the brainchild of Jake Lawson (Gerard Butler), a brilliant-but-arrogant scientist (as if there is any other kind of heroic scientist in the movies). Because of his temper, he’s removed from his leadership role, and oversight is switched to his estranged brother, Max (Jim Sturgess), a State Department bureaucrat. 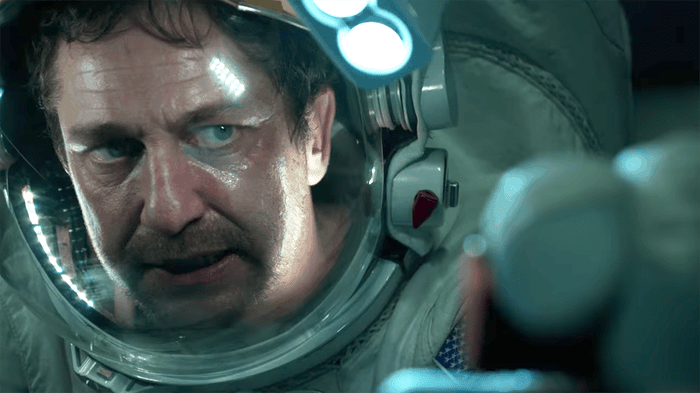 The 17-nation space station project has been under the sole control of the United States since its inception, but it’s about to be handed over to a global coalition. Then things go wrong. The system begins malfunctioning. A desert town in Afghanistan is encased in ice. Extreme heat causes catastrophic explosions in Hong Kong. And anyone who investigates these incidents winds up dead. There’s a concentrated effort to wreak global havoc, and the conspiracy might go Right Up To The Top (as if there is any other kind of conspiracy in the movies). But who is doing this, and what are their motives?

I would tell you, but a) that would be a spoiler, and b) you wouldn’t believe me if I did. The third act of Geostorm is based on a development so contrived that it may as well have been typed out by a predictive text software that was fed a few hundred movie tropes. What I will say is that it involves Max and Jake rushing to stop the titular geostorm, in which the satellites will fire on all cylinders, causing apocalyptic damage to every corner of the globe. (Why that would be a built-in feature, I’ll never understand.) In the climax, we see – get this – a countdown clock on the central computer system, labeled “Time To Geostorm.” From the ashes of the red digital bomb readout, it’s now Time To Geostorm.

Moments like these almost render Geostorm worth seeing. The absurdities of its structure, plot, and scene-to-scene inanity are all we have. After all, the special effects are unremarkable, and the acting is mediocre, given how pedestrian the characters are. Although maybe it still succeeds. We go to these kinds of films not for enlightenment on the state of the world, not to search for intelligent observations on the human condition, but to be entertained. And Devlin entertains us here. 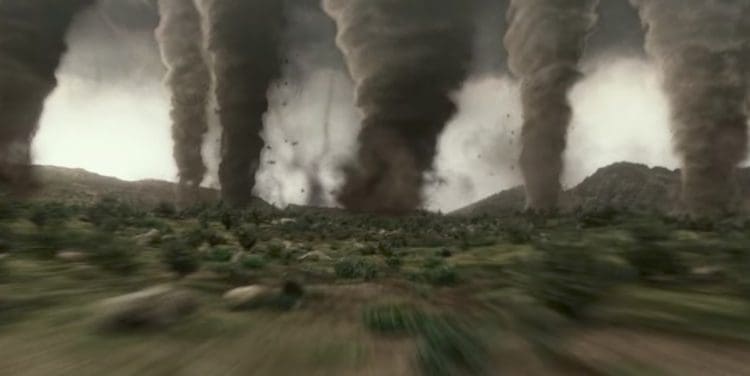 Geostorm is amusing but not in the ways it intends to be. It opens and closes on a voiceover that urges for greater global cooperation to combat global warming, but considering the insanity it sandwiches, I almost wonder if the movie was funded by a massive oil drilling conglomerate to make the entire environmentalist movement look like a joke.

But I don’t mean to scare you off this. In the right time, in the right mood, it will work like a charm. It chugs along like a wind-up toy that’s been set on fire and shoots out hallucinogens – there’s nothing else quite like it. The theory of good-bad movies is that they don’t know that they’re misguided, and we seek a kind of schadenfreude from the mess it makes. This movie is terrible. Please see it as soon as you can.