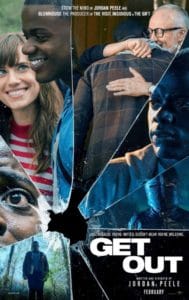 Jordan Peele, along with his collaborator Keegan-Michael Key, skillfully constructed short-form satire on the TV show Key & Peele. With his directorial debut, Get Out, Peele proves to be equally proficient in crafting a tight, smart, relevant genre feature. If there’s any knock it’s that the film is almost too efficient, telegraphing some twists, but even if we occasionally see what’s coming it always feels fresh and honest. It’s also just really entertaining, combining humor with thrills while slyly presenting discussion points to take away from the theater.

“Do they know I’m black?” Early on, that’s the question Chris (Daniel Kaluuya) poses to his white girlfriend Rose (Allison Williams). The couple is going to visit Rose’s parents and the logical, innocent question is also a loaded one. What follows plays as if Guess Who’s Coming to Dinner has been reimagined by John Carpenter.

Rose’s parents, Dean and Missy, (Bradley Whitford and Catherine Keener), a neurosurgeon and psychiatrist, respectively, are extremely welcoming at their isolated suburban lake property. That’s when the overly-polite yet condescending, racially-tinged comments from Dean, Rose’s brother Jeremy (Caleb Landry Jones), and their white upper-middle class friends begin. Dean points out his admiration for former president Obama and Jesse Owens. He calls Chris “My man.” One neighbor mentions how he met Tiger Woods. A suburban housewife squeezes Chris’ biceps as if she’s inspecting him.

It’s all uncomfortable in a very playful way, with Chris taking things in stride and Peele presenting everything as casually commonplace. For us, the cringe-worthy asides add another layer of fundamental dread. Kaluuya and Williams have the chemistry to make their discussions of the uncomfortableness feel natural, and the screenplay includes several authentic-sounding conversations that never devolve into obvious “message” platitudes.

There are some routine horror tropes – loud music stings, sidling characters that appear from nowhere, and past trauma that haunts Chris and is probably going to become significant – but they’re mixed with more grounded elements that offset their familiarity. The music by Michael Abels, sounding increasingly ominous and ritualistic, also bridges the gaps between the normal and the eerie. Much of the weirdness comes from Georgina (Betty Gabriel) and Walter (Marcus Henderson), the family’s black Stepford servants. They’re just…off.

Balancing off-putting with amiable, Whitford and Keener are note-perfect. Also great is Lil Rey Howery as Chris’ friend Rod, whose level of comedic panic rises the more time Chris spends in the ‘burbs. His crazy fast-talking is rational and true-to-character, making even the comic relief elemental. Stephen Root also leaves an impression with limited screen time as a blind art dealer (oh, the irony), who admires Chris’ eye for photography.

When things go from underlying creepiness to overt craziness, Peele disseminates information and stages the action in ways that maintain tension without ever losing sight of core themes. The helplessness of being trapped in a foreign environment becomes effectively horrific, literal, and relatable. The representation of being paralyzed with fear is unsettling.

The climax is soaked in blood, but also consequence beyond the conventions. Right up until the last moments, Peele effectively nods to several horror classics while forging his own distinct style, simultaneously tackling the sticky subject of racism with wit and depth. Topical, thought-provoking, tense, and fun, Get Out is genre fusion at its sharpest.